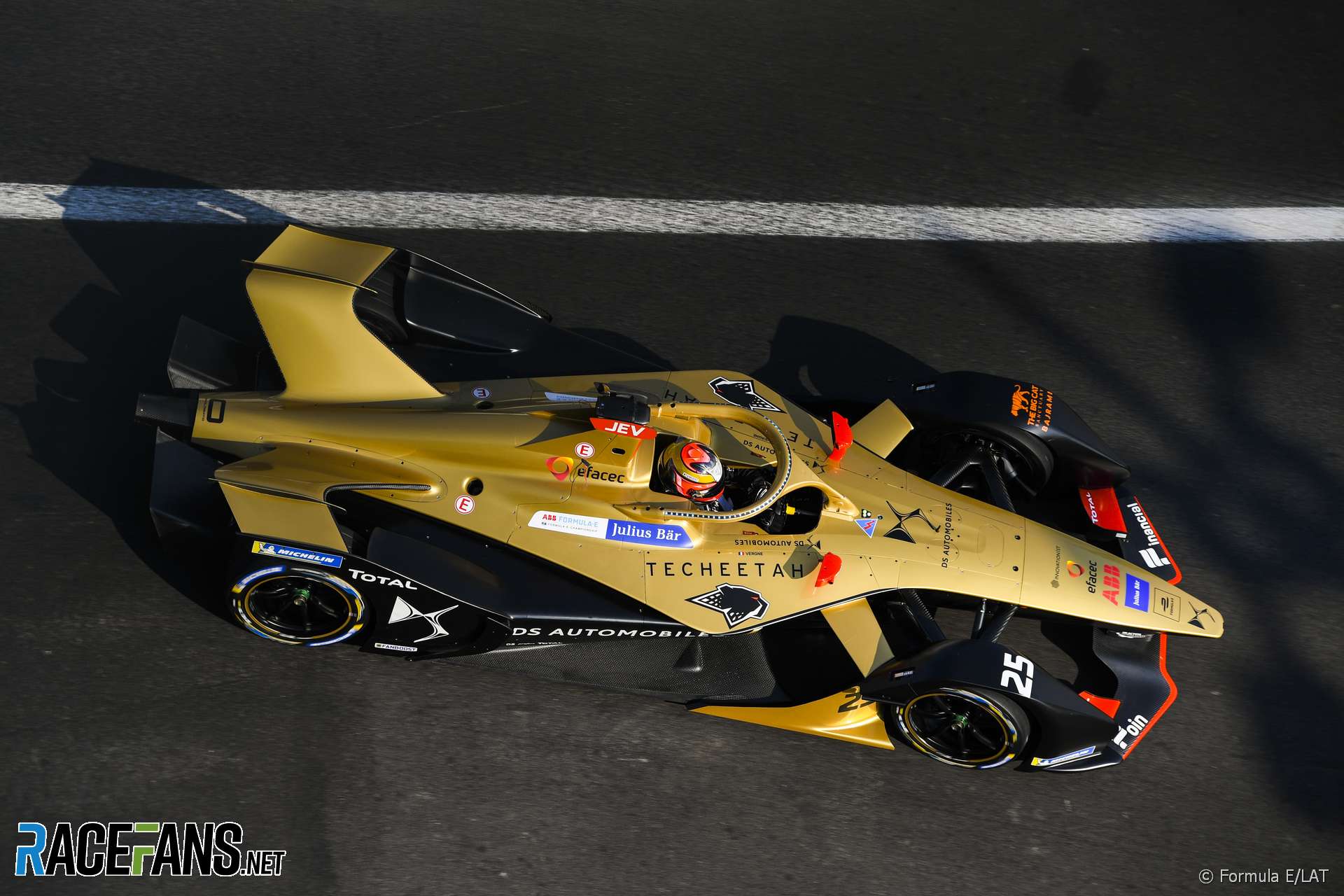 Ahead of the race, the FIA announced that there would be three mandatory activations of Attack Mode, rather than the two available for the rest of the season; consistent with the original plan to vary the length and number of activations.

Pole-sitter Alexander Sims made a clean getaway, with third-placed Sebastien Buemi doing as Alex Lynn had behind him yesterday, to jump into second via the cleaner side of the grid ahead of Robin Frijns.

Going in to the final race of the season, all three title contenders were within touching but by no means secure distance of the championship. Mitch Evans, who needed to win and get fastest lap, with Vergne scoring no points, began in eighth while Vergne himself started alongside Di Grassi

On lap one, Lotterer collided with the rear of Lopez, spinning the Dragon car who then in turn hit Lotterer in righting himself. A critical blow for Techeetah, whose teams’ championship lead was by no means secure from Audi.

It got worse when with 40 minutes to go, Lotterer had to pits as the Safety Car was deployed as Lopez has stopped on track after the earlier contact. The race restarted with a few seconds over 34 minutes to go, with the order changing frenetically in the top 5 but with no effect on the championship fight – which remained with Evans 8th, Di Grassi and Vergne 10th and 11th respectively and Vergne’s hand on the trophy.

Abt was able to pass Evans for eighth, then seventh and sixth with Di Grassi hunting Evans down. With only 24 points separating the teams’ title and Vergne still right behind Di Grassi, Audi’s chance of once again frustrating Techeetah for one of the titles (as last year) started to look much more likely than the drivers’ championship.

Meanwhile Sims and Frijns, at the front of the pack, were duelling between Attack Mode activations, with Frijns eventually bagging Sims just before the half an hour remaining mark. Sims stayed with him, despite harrying from Buemi behind.

Vergne was briefly separated from his glued-on position behind Di Grassi after Da Costa managed to split them for 10th – a crucial position as if Vergne scored even a point Di Grassi and Evans’ job became mathematically harder. Vergne rapidly used Attack Mode to retake the position and they remained stuck together, as Evans managed to finally move to 6th – a gap that could see him bag second place from Di Grassi.

Di Grassi eventually managed to move up, with a descending Vandoorne and then Rowland separating himself and Vergne and Evans holding out ahead, now sandwiched between the Audi drivers with Abt ahead and Di Grassi behind. With just three and a half minutes to go, Evans was warned not to risk it with Abt as the newly-re-signed Audi driver might risk a collision to allow Di Grassi through.

On the final turns of the final lap, after hard-racing for the majority of the race, Di Grassi finally collided with Evans – leaving them both in the Tecpro and handing second place in the championship to Sebastien Buemi, Di Grassi retains third place while DS Techeetah take both Driver and Teams’ titles.