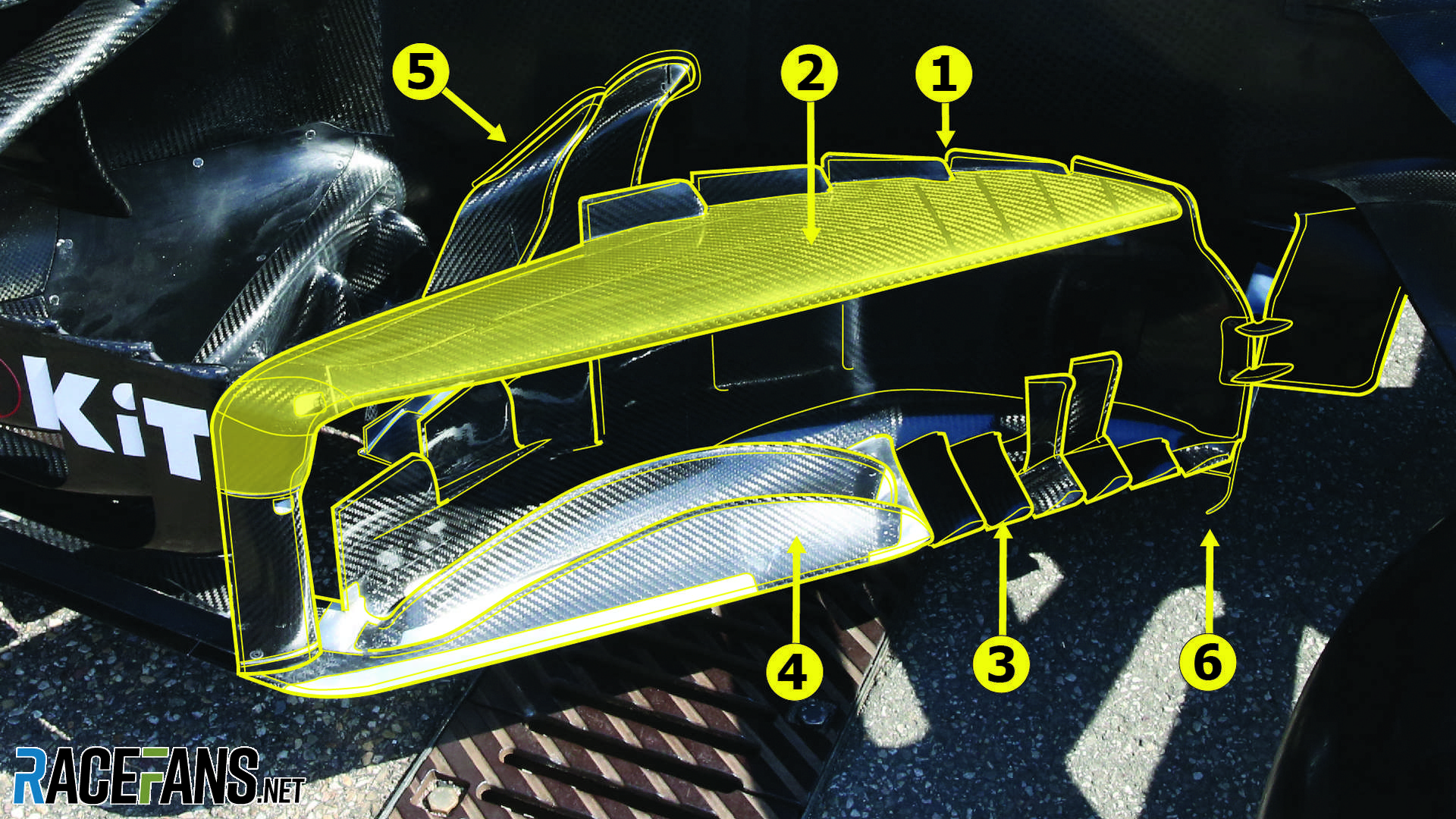 Williams prefers to call its new parts ‘test items’ rather than ‘upgrades’. However in Germany the team has brought its biggest package of ‘test items’ so far, which the team hopes will prove the upgrade they need to cut their deficit to the rest of the F1 field.

Continuing the optimism that the team can claw its way back into competitiveness, the FW42 gained another step in its development path for Germany with a substantially updated bargeboard package and floor.

At the last race Williams revised the top half of the bargeboards and the sidepod fins. In Germany the main bargeboards have received attention and are so different to the old spec that they are effectively all-new.

Some aspects of the bargeboard package are similar, but the new set-up fills much more of the available volume for bodywork around the sides of the car. In doing so they are much more conventional and follow other teams’ established bargeboard practices.

In detail, the main boards that make up the vertical surfaces (1) are much more slotted, formed by five forward fins and three smaller fins trailing them lower down. Across the top of the main boards is a Boomerang wing (2), this leads back to joins the sidepod vane and is used to down-wash the airflow rising up from the front wing to direct towards the sidepod’s undercut and thus onwards towards the diffuser.

Along the bottom of the bargeboards the footplate area is totally changed as well, again much larger in surface area. At the front there are fewer horizontal fins than before, but there are a new set of upstanding fins (3). Then the scrolled footplate (4) section trailing the fins are larger and merge into the outer front part of the floor in a different way.

Williams have run an extra pair of turning vanes behind the main bargeboards for several seasons. As with the rest of the set up these have been changed. The two vanes (5) are taller and folder over to meet the chassis side, with shape likely to create downwash towards the sidepod undercut.

One tiny detail on the floor is a legality element for the front of the T-Tray splitter. Regulations demand the front of the splitter must have a specific radius and not be sharp-edged. This rule caught out Haas last year. The team had several areas of bodywork converging in the same area and thus a clear radius wasn’t formed, its rivals questioned the design to the FIA and after much wrangling Romain Grosjean lost his points finish in the Italian Grand Prix.

With the increasing complexity of bargeboards in this area, the splitter isn’t as wide as it used to be and the ‘radiussed’ leading edge still needs to be formed. Williams have added a legality part (6), formed of a small machined piece of metal, as this as wire to meet the wording of the splitter leading-edge rules. This sort of solution wasn’t what the rules intended and it’s possible that some teams may be having a close look at this solution.

In addition to the bargeboard package, the floor is new too. At the moment the key change is to the slots along the floor edge, but the looking close at detail of the floor, it appears that the floor is an all new part, as several of the bonded-in sections and access hatches are repositioned.

The slot ahead of the rear tyres (1) appears similar in design before. It’s the long edge of the floor which is new, as the multiple old short transverse slots have been replaced with the more fashionable longitudinal slots (2).

These longer slots work with the high pressure built up on top of the floor and direct it outwards to work with the Y250 flow structure in pushing the front tyre wake away from the rear of the car. Further aiding the ‘outwash’ effect, the floor slots are supported by small crescent-shaped aluminium supports (3), positioned in line with the airflow direction to help push the air outboard.

As mentioned above the slot ahead of the rear tyre to reduce tyre wake entering the diffuser is similar, as are the rear brake ducts mounted above. It’s not clear at this stage how much is new around the diffuser area, but this is also likely to have been revised bearing in mind the upstream changes.

Such a wealth of changes are likely to help the car’s performance. But given the scale of the team’s deficit it is unlikely to be the full solution Williams is working towards. More updates are planned for the upcoming races.

If it works as intended, what the German GP update package will bring is more of all of the bargeboard’s effects, that is; outwash for the front tyre wake, downwash towards the sidepod undercut and redistribution of the pressure under the floor. All typical aims for in-season aero development and especially important for Williams to regain lost ground to the midfield.