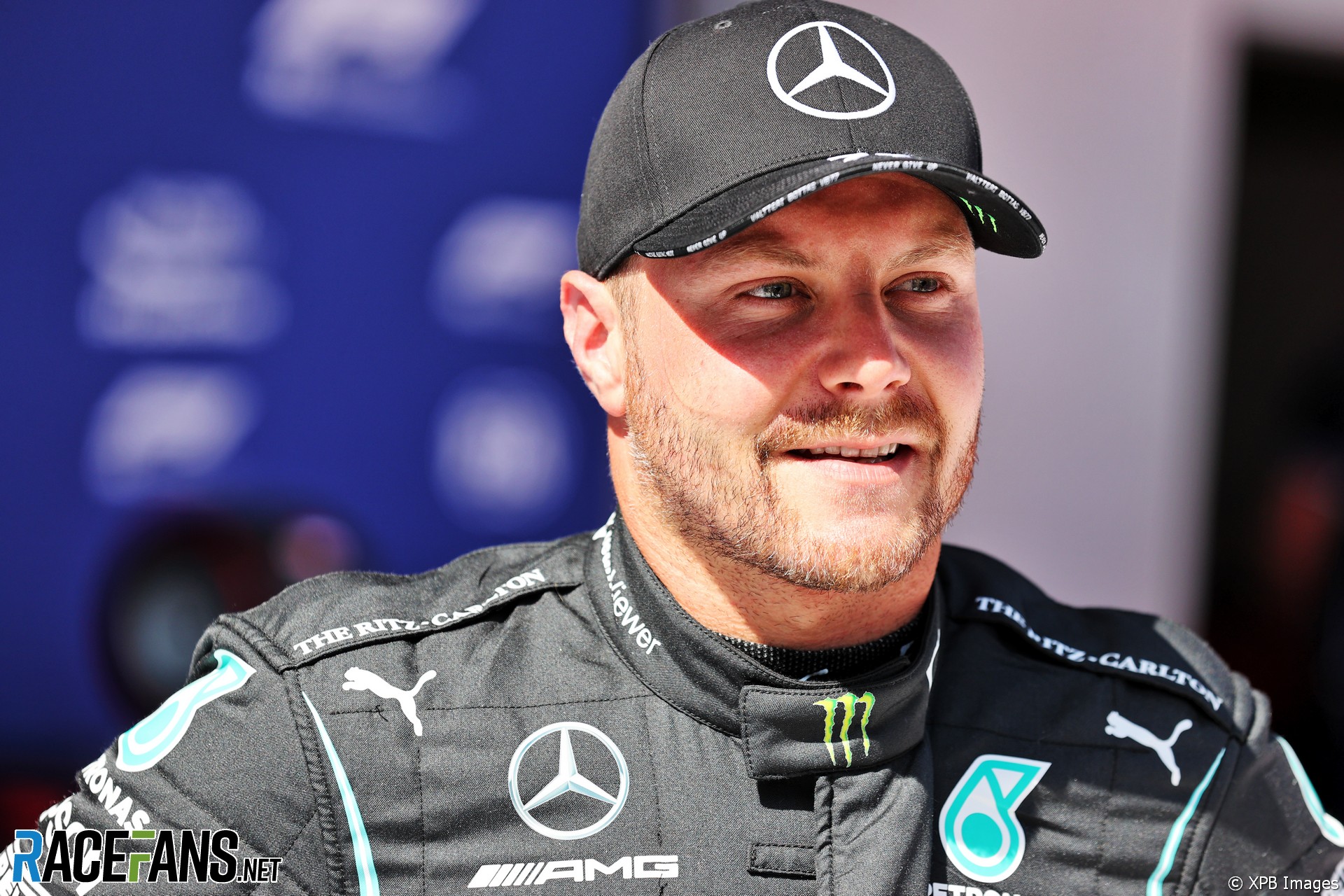 Valtteri Bottas made his Formula One race debut for Williams in 2013.

Bottas joined the team in 2010, taking over from Nico Hulkenberg as their test and reserve driver. After winning the 2011 GP3 championship he spent a year out of racing but appeared in practice sessions at official F1 weekends in 15 of the 20 rounds.

Bottas said this was the best preparation a young driver could get at the time due to the ban on in-season testing. The team were sufficiently impressed with his performance to drop Bruno Senna in favour of him at the end of 2012.

The 2012 season was his first year without a race start since he began karting in 1995, aged six. He made the step up to racing cars in 2007, finishing third overall in the Formula Renault 2.0 Northern European Championship.

He won the title the following year and further impressed by taking the Eurocup title as well. With three races to go he was tied for second place with two rivals, and trailing sophomore driver Daniel Ricciardo by 13 points. But Bottas won the next two races and victory for Ricciardo in the finale was not enough to keep the Finn from the title.

His next step took him to Formula Three with powerhouse outfit ART. Bottas failed to win a championship round in his debut season, but did take victory in the prestigious F3 Masters race, and consistent points-scoring helped him to an excellent third in his first season and top rookie in the series.

Team mate Jules Bianchi claimed the title, becoming the sixth consecutive ART driver to do so. With Bottas remaining at the team for 2010 he was widely expected to follow in the footsteps of Bianchi and prior ART title-winners Jamie Green, Lewis Hamilton, Paul di Resta, Romain Grosjean and Hulkenberg.

But to the surprise of many 2010 produced no more than a repeat result for Bottas: third in the championship and another win in the Masters. ART had finally met their match and the Mercedes-powered cars were out-gunned (and out-spent) by Volkswagen-backed Signature, whose driver Edoardo Mortara clinched the title.

Seeking to inject some momentum back into his career trajectory, Bottas gambled on a switch to GP3 for the championship’s second season in 2010. This was something of a sideways step from F3 but it put him in full view of the F1 paddock at every race weekend.

He caught the eye of Williams, who gave him his first run in an F1 car in a straight-line aerodynamic test that May. Bottas seized the opportunity to develop ties with the team. “When I’m at home I visit the Williams factory every single day,” he said in 2010. “I execute stints in every department, help the staff and learn a lot. And once or twice a week I sit in the simulator.”

Halfway through the season it seemed his move had not paid off. With eight races to go he was languishing in tenth in the championship. But after he and ART team mate James Calado got to the bottom of their car’s set-up problems the pair became championship frontrunners. Bottas won a race in each of the remaining four weekends and beat Calado to the title.

Bottas followed one unconventional career move with another, electing not to race at all in 2012 (a move to Formula Renault 3.5 was considered and rejected) and instead focus on participating in F1 practice sessions. He made all of his 15 appearances in Bruno Senna’s car, and season-long rumours he would take Senna’s place were confirmed in late November.

“Valtteri has been part of the Williams family for three years now and I know that he’s thought of very highly of by our race engineers and others in the paddock,” said team principal and founder Frank Williams.

“His ability to assimilate information quickly is excellent, and he has shown in 2012 during Friday practice that he can quickly get up to speed at a new track.”

Bottas has enjoyed the support and assistance of two-times world champion and fellow Finn Mika Hakkinen on his way to F1, as well as the guidance of Didier Coton and Toto Wolff.

Bottas had little chance to impress at the sharp end of the field in 2013 as Williams’ FW35 was well off the pace. But he seized any opportunities that presented themselves, notably in Canada where he qualified a remarkable third in a rain-hit session.

Late in the season the team made some gains with their car and Bottas delivered a strong eighth in America, which was better than anything his more experienced team mate Pastor Maldonado achieved all year. While Maldonado left the team at the end of the year, Bottas was kept on for a second season.

The Mercedes-powered FW37 proved a huge step forward, though one the team didn’t make the most of in the early stages of 2014. The season-opening round at Melbourne was a good example: Bottas managed to finish fifth despite an early brush with the wall.

In the first 13 races he was only out of the points once, in Monaco, where a rare car failure intervened. In Austria he shared the front row of the grid with new team mate Felipe Massa and claimed his first podium finish.

He followed it up immediately with two more: the first from 14th on the grid at Silverstone, the second despite pressure from Hamilton’s much quicker Mercedes in the closing stages. Although Massa proved a tougher competitor towards the end of the year, Bottas prevailed in the drivers’ championship, taking a strong fourth place.

Although Bottas was unable to improve on his results in 2015, its doubtful the Williams chassis was able to deliver more than the fifth in the championship he occupied behind the two Mercedes and Ferrari drivers. And but for a back injury which forced him out of the first race of the year, and being rammed out of a podium position by Kimi Raikkonen in Russia, he probably would have finished one place higher.

Bottas said it wan’t until the end of the opening quartet of fly-away races that he was free from any back pain, and his results demonstrated a clear upswing in form. He beat one of the Ferraris in Bahrain and Spain, and both of them in Canada to take his first podium finish of the year.

The British Grand Prix briefly promised even more when the Williams pair hit the front early on, Bottas in hot pursuit of Massa. Despite his best efforts Bottas was unable to pass his team mate – the pit wall initially told him he wasn’t allowed to – and he later slipped to fifth place when rain fell.

After the frustrations of Russia and USA – the latter were a technical problem scuppered his efforts in qualifying and the race – Bottas bounced back with another podium finish in Mexico. But there was no escaping the fact this was slimmer pickings than he had enjoyed 12 months earlier, and in the meantime he had also been passed over by Ferrari.

The 2016 season was a disappointment for Williams, whose position as Mercedes’ top customer team was taken by Force India. However Bottas delivered their sole podium finish of the season, in Canada.

He also underlined his potential with a string of consecutive points finishes and out-qualified Massa by an emphatic margin. As the season drew to a close that seemed to be the end of it: Massa was heading to retirement and Bottas would be team mate to incoming rookie Lance Stroll in 2017.

But Nico Rosberg’s shock retirement a few days after winning the world championship changed all that. Now Mercedes needed a driver at short notice, and Wolff’s backing of Bottas opened the door for him to take one the most coveted seat in the sport.

Mercedes had dominated the previous three seasons and though it faced a renewed threat from Ferrari in 2017 it remained the team to beat. Bottas put his new W08 to good use early on: He took pole position at his third race for the team in Bahrain, though in the race a tyre pressure problem set him back. He made amends next time out, elbowing past both Ferraris at the start to win at Sochi, then followed it up with another triumph in Austria.

He remained in the thick of the championship hunt until mid-season and it was no surprise when Mercedes extended his contract for another year. In Hungary Hamilton even ceded third place to him within sight of the flag, honouring an arrangement to return the place to his team mate who had handed it over earlier in the race.

The second half of the season proved more trying. While Hamilton reeled off a series of wins and clinched his fourth world championship, Bottas struggled with his car at times. He squandered a shot at winning from pole in Brazil, but made amends at the season finale in Yas Marina where he led Hamilton to the flag.