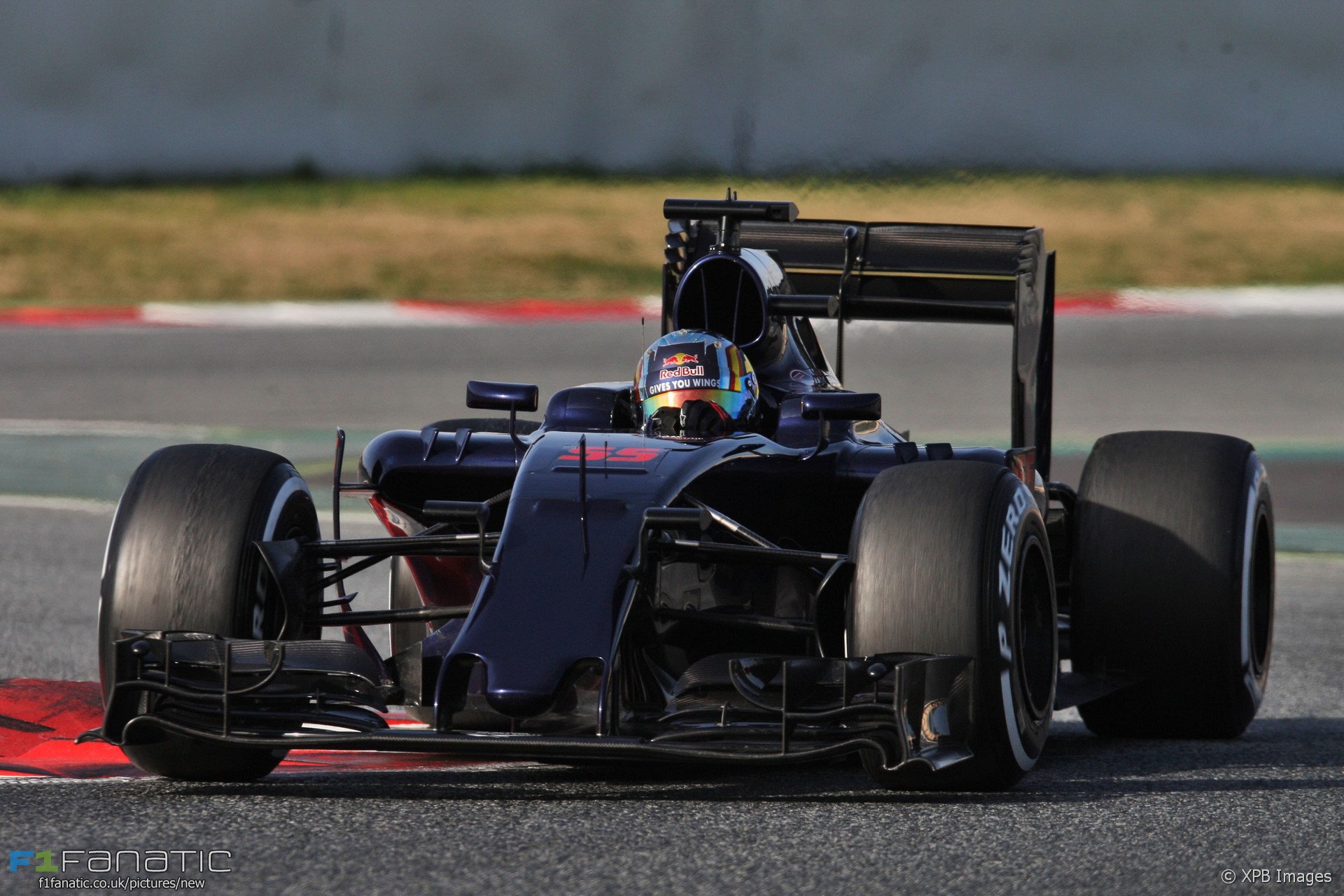 Having struggled for reliability last year, and with just eight days to iron out any problems following a change of engine supplier, it was vital for Toro Rosso to get running with their new car as quickly as possible.

This was accomplished, and on day three the Carlos Sainz Jnr achieved the second-highest daily mileage of anyone so far, an encouraging sign for the team.

While Toro Rosso refers to the chassis as STR-11, Sainz Jnr has indicated it is very closely related to the STR-10. However it does feature several notable and innovative details.

With the potential benefit of a proven and reliable power unit early in the season, and another aerodynamically effective design from technical director James Key, Toro Rosso should be well-placed to come out of the blocks fast and score some valuable points early in the year.

Like Renault, Toro Rosso has had to cope with an 11th-hour change of power unit supplier. This is a far more demanding task with the V6 turbo hybrids due to the complicated and unique architectures used by the manufacturers.

“The engines are very different,” explains Rob Marshall of Red Bull, another team which came close to changing engine suppliers last year. “Even though you assume they’re all designed to the same regulations they’ve all got different lumps and bumps on them, they stick into the gearbox or the chassis by different amounts.”

Toro Rosso have undergone that upheaval as the STR11 was designed around the new Renault power unit. Not only is the Ferrari architecture very different to Renault’s, its weight distribution will also vary. This quickly complicates how the overall balance of the chassis is affected, as the centre of gravity and centre of pressure from the aerodynamics are linked to provide good stability at low and high speeds.

Like most cars during the opening stages of testing, the front wing is simply a carry-over from 2015 as a baseline component. However the front end of the STR11 as a whole is a clear evolution from its predecessor.

The neatly integrated thumb-tip/wing mounting pylons within the main body of the nose has been retained, while the top surface has been flattened off slightly. This has been achieved by having a core conical crash structure with the curved wing pylons and outer geometry effectively forming a shell around it. This allows for more extreme contouring of the bodywork.

STR have taken on the S-duct for 2016 but it has a unique design over the opposition. The duct itself is in the nose box but rather than being fed by a long slot at the bottom of the front bulkhead, two NACA inlets are used midway along the nose instead. The exit of the duct is ahead of the pitot tube stack although the current outlet looks a little basic.

Atop the nose are the Mercedes-style camera pods fixed to a pair of slender stalks. These will be banned in 2017, but for now provide a good way of using their wake in front of the suspension. There are also a further two NACA inlets underneath the nose to provide driver cooling.

The front brake ducts are all new and take a lot of design hints from McLaren’s clamshell shape. Connected to the ducts are new conjoined lower wishbones that will match their corresponding rear arms from mid-2015 onwards.

Toro Rosso also appear to be running a blown front axle set-up to help the out-wash effect of the front wing.

Continuing with their oversized airbox from the previous two years, Toro Rosso’s current iteration is the most elegant and almost identical that found on the Mercedes.

The airbox has been split into three: the central inlet provides for the turbocharger’s compressor and the remaining two for other coolers. I would imagine one is for the gearbox oil and the other for the water-jacketed intercooler that sits in the middle of the V of the 2015 Ferrari power unit.

It is clear that the STR11 has over-compensated on rear cooling at the moment (note the extremely flared rear bodywork) thanks to the late change of power unit but should they manage to reduce the heat build-up inside they could well have the most tightly packaged car in the paddock.

The sidepod inlets carry over their curvy shape from last year but have been further sculpted to produce an extreme undercut. The pods then continue to hug the car very tightly as they head towards the Coke-bottle section, before splaying back outwards to reject heat from the internals. Two vortex generators sit on top of each of the sidepod’s leading edges to help airflow navigate its way across the sculpted profile.

Toro Rosso have pushed the boat out in the rear wing department. The traditionally swoopy main-plane has been deleted in favour of a more conventional design, with the DRS actuator neatly integrated into the central rear wing pylon. This, like last year, has been pushed through the exhaust outlet to attach with the top of the rear crash structure.

The end-plates have a variety of slots and vanes but the stand-out feature is the horizontal slot array just above the rear wing. These reduces the pressure gradient between the upper and lower surfaces of the wing at the tips reduce the size of drag inducing wing-tip vortices.

Rather than being just holes, the cut-outs run all the way to the leading edge of the endplate. This means that as soon as airflow hits the endplate it is already evacuating from its inside face. I am surprised this design has not been used before, although Red Bull experimented with a similar solution throughout last year. This could well be copied as the season progresses.

At the next test Toro Rosso will reveal the STR11 in its finished livery. Expect to see further technical refinements too, particularly around the rear of the car. But as last year the team have produced another tidy racing machine with some outside-of-the-box thinking that could catch out some of the better-resourced rivals.