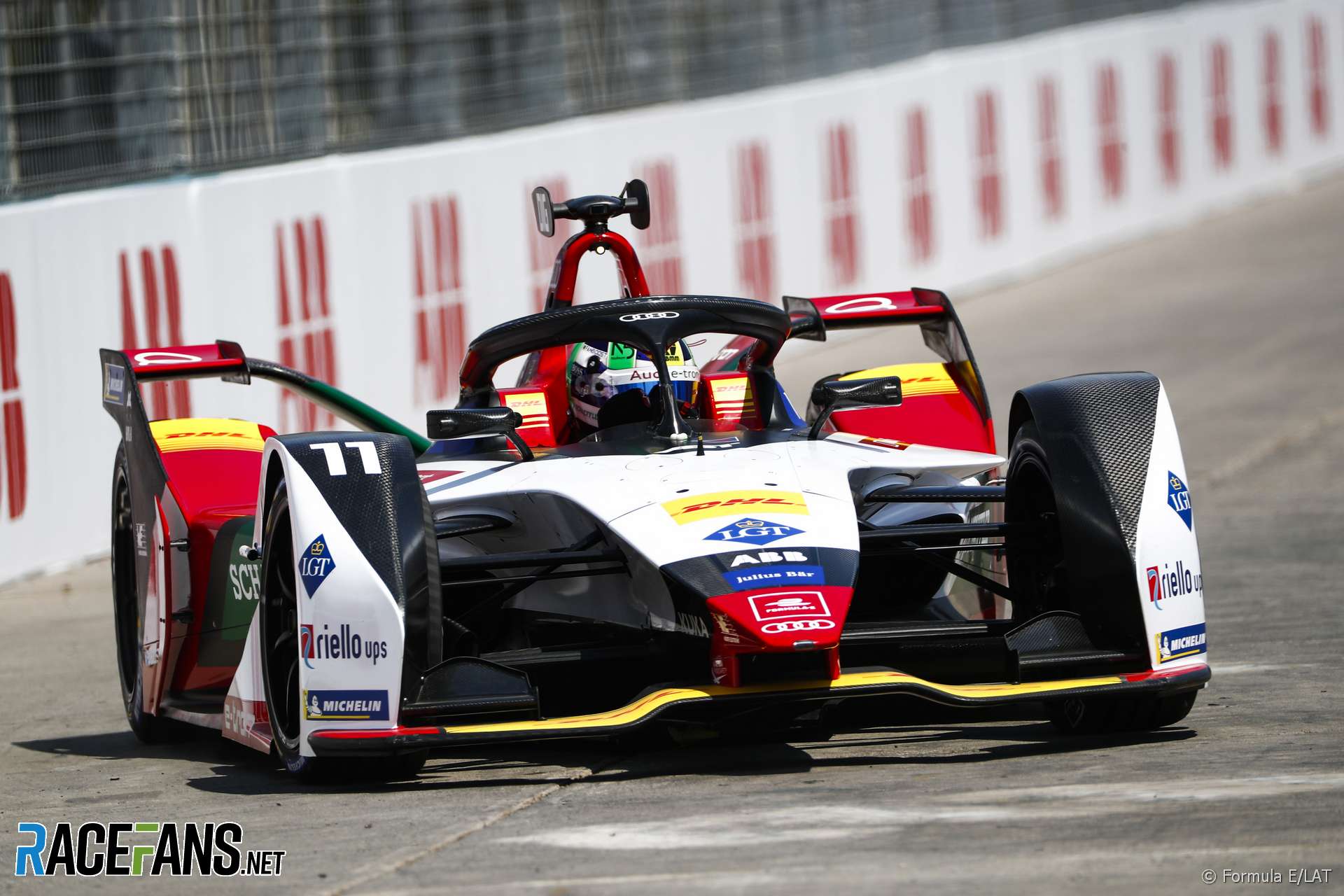 Lucas di Grassi took pole position for the Santiago Eprix by six tenths of a second, but the Audi Abt driver is under investigation for potential in-lap procedure infringements.

The incredibly strong first qualifying group went out as straightforwardly as you’d expect from the championship leaders. An error by Jerome D’Ambrosio set him back a few tenths but an otherwise incident-free session saw Jean-Eric Vergne top the times on 1’09.307.

Although the track temperature did not rise for this session, pit temperature did by one degree. For cars waiting in the pits, this is significant after the bizarre collision between Tom Dillman and Robin Frijns in Marrakech where Dillman claimed his brakes had ‘cooked’ in the hot pit lane, although the manufacturer denied this.

However, if it had an effect it seemed to make the cars faster – every driver in Group 2 beat the times set in Group 1’s session, Buemi leading the session more than half a second clear of Vergne’s time.

Track development seemed to slow in this group – despite the massive gains between groups 1 and 2, only two drivers from this group were able to trouble Super Pole’s contention. Daniel Abt, topping the times at 1’9.030 and new driver Maximilian Gunther pulling an extraordinary 1’9.143 out of his Dragon car, ahead of more experienced teammate Jose-Maria Lopez, who could not match his own best time from the practice sessions (1’08.194) with only a 1’09.201.

Pit lane temperature had edged up another degree to 32C by the time the fourth qualifying group embarked and Super Pole contender Di Grassi had been announced as under investigation for a technical infringement, which he theorised might be to do with regulations about brake temperature manipulation on his out lap.

After Group 3 had failed to outdo Group 2, Group 4 saw more mixed results completely. An incredibly fast lap by Pascal Wehrlein, who qualified well in Marrakech but failed to reach Super Pole, saw him outright top the timing sheets at 1’08.463, beating an incredibly strong and experienced field.

Stoffel Vandoorne was unable to beat Wehrlein’s time but still took fifth places with a 1’08.962, while teammate Gary Paffett only managed a 1’9.505 for fourteenth place.

Track temperature had also gone up a degree to 31C by the time Super Pole started, as always in reverse timing order so starting with Abt, whose lap looked very strong bar a wall clip, putting in a 1’08.958, beating his previous time by several hundredths of a second.

During Vandoorne’s Super Pole lap the former Formula One driver was placed under investigation for potential infringement of Super Pole procedure – as both driver and team are new to the championship, mistakes are definitely possible within Formula E’s strict qualifying format. Nevertheless, he put together a 1’09.235, not challenging Abt and slower than his previous time, as Super Pole laps often are. With a worst placing of sixth, however, it would be HWA’s best performance.

Sam Bird followed, having said that his group qualifying lap had been messy towards the end – as was his Super Pole turn, a slide putting him at the back of the times on 1’9.253. Di Grassi, however, dramatically improved his group time to take provisional pole from his teammate by six tenths of a second on 1’08.290.

Buemi, one of Formula E’s most successful drivers but now more than a season without a race win and without a recent pole, put in a much more competitive 1’08.816 but was unable to contest Di Grassi’s huge margin. Wehrlein, whose car had no time to cool between sessions, put in another strong effort to take third place on 1’08.925 but was also unable to beat the Brazilian.