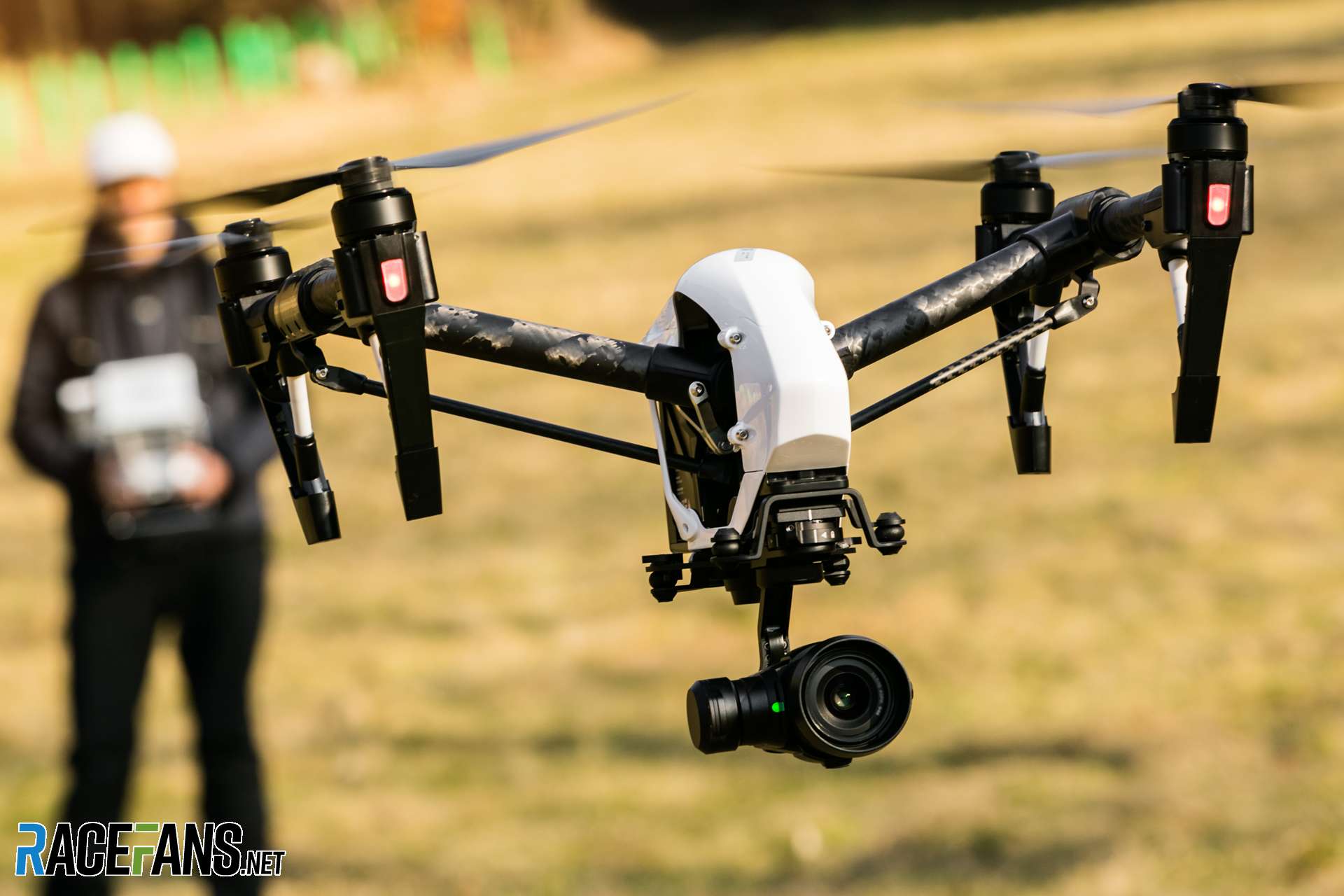 It’s an unfortunate measure of the international attention Formula 1 races attract that in recent years groups and individuals have sought to hijack them for their own causes.

The 2013 Belgian Grand Prix was the first time a grand prix venue was targeted by a global environmental body, namely Greenpeace. The organisation protested against title-sponsor Shell’s Arctic oil exploration, and sent some 30 activists to the grand prix, some via paragliders.

They unfolded large banners at the start/finish line and Eau Rouge at the start of the race. However Greenpeace had clearly not realised Formula One Management controls F1’s airwaves and inevitably kept them out of view.

Later Greenpeace deployed remote-controlled banners during the podium ceremony. But only eagle-eyed viewers would have spotted a brief glimpse of their handiwork, or perhaps wondered why the TV director lingered so long on close-ups of smirking race-winner Sebastian Vettel, or why F1’s ceremonies officer Alex Molina appeared in shot as he hurriedly removed the offending artwork.

While those at the track had an unimpeded view of events, not everyone comprehended what they were looking at. Some thought the gliders had replaced F1’s usual pre-race aerobatics displays. “We thought they were protesting against ticket prices,” one reader told us at the time.

This anecdote illustrates how successfully FOM blocked out the protest: At the time I was F1 correspondent for the motoring supplement of a South African daily, whose editor happened to be in Spa-Francorchamps on an Infiniti jolly, and spent the race quaffing whatever in the Paddock Club.

Upon his return to Johannesburg he read my race report, sub-edited in his absence by another journalist, then called me and accused me of having fabricated the Greenpeace lines. I pointed out that I’d been totally sober that afternoon…

Many race reports ignored the protest. When Shell’s sponsorship and signage deal expired two years later the oil company did not extend it, although it continues to partner Ferrari technically and commercially. At the time a Shell spokesperson said the decision was unconnected to Greenpeace’s protest, but did not deny that a grand prix is an easier public target than is a race team.

In July 2003 Neil Horan, a Catholic priest (subsequently dismissed from the clergy), exhorted Mark Webber (and others) to read the bible while travelling down Silverstone’s Hangar Straight at 200mph before being rugby tackled by a marshal, then arrested. The Irishman was sentenced to two months in prison for aggravated trespass.

Three years earlier a then-47-year-old Mercedes-Benz employee Robert Sehli disrupted the German Grand Prix by parading beside the track wearing a raincoat in protest against having been dismissed from his job on health grounds. The Frenchman was arrested and fined.

Worryingly, he had attempted to protest at his home race at Magny-Cours before being apprehended, then been removed from the Hockenheim grid, where he planned to disrupt the start. Undeterred, he penetrated the circuit’s barriers on lap 25, causing the Safety Car to be deployed and altering the face of the race. Mercedes subsequently lost an almost-certain win, while Sehli eventually won unfair dismissal damages.

Even the best circuit security can be breached to greater or lesser degrees, and hence stringent security id required at all major events, including grands prix. Most F1 personnel are by now accustomed to regular X-raying, frisking and bag searches, with the target of my occasional curses being not race promoters, but the disruptors of sporting events across the world – whatever their missions may be.

Regardless of the merits or (questionable) successes of the individual protests, all the foregoing events have, though, a common denominator: humans were physically present within the grand prix circuit perimeter, from where they subsequently struck. True, the Greenpeace paragliders had been launched in nearby Luxembourg, but they landed within the confines of Spa-Francorchamps.

But now would-be grand prix saboteurs have the means of disrupting proceedings without even having to buy a ticket.

Drones – properly known as Unmanned Aerial Vehicles (UAVs) or Miniature Pilotless Aircraft (MPAs) – can be transported in the boot of a compact car and launched by a single person. One person can even control two or more simultaneously.

Worryingly, these potential instruments of protest are indisputably more disruptive than traditional activities, require little (or no) formal training, are difficult to monitor let alone control through legislation despite pending moves in this direction, whilst ownership of this technology is growing. It may not be a question of ‘if’ but ‘when’ Formula 1 faces threat from this technology.

Legislation, for what it’s presently worth, varies from country to country. But in most territories the weight of consumer drones is restricted to 20kg (45lb) and these may not be flown higher than 120 metres (400 feet), and must be kept 50 metres (140 feet) from people and private property, and 150 metres from congested areas and organised open-air assemblies of more than 1,000 people.

But of course the letter of the law is not always a deterrent. For example, last week many key points in London were disrupted by Extinction Rebellion, whose specific aim was to have people arrested in order to draw attention to climate change. At time of writing the number of arrests exceeded 1,000, with 71 charged with public order offences.

Just as race cars range from grass racing bangers to F1 cars, so drones can vary massively: from hand-launch craft with 600-yard ceilings/one-mile range through NATO-type drones (3,000 yard/five miles) to the serious (5,000 yard/100 miles) – and then come hypersonic craft.

With that sort of performance even the most basic drones weighting a few pounds have the potential to inflict serious damage on race cars travelling at 100mph, let alone double that. Consider then that a 22kg craft has the potential to destroy an aircraft – halo or not.

Since 2015 civilian drone ownership has enjoyed an annual compound growth rate of over 20 per cent, meaning numbers double every three years or so – with the curve showing no sign of flattening.

In the USA alone the number of registered drone ‘pilots’ now exceeds 1 million – many of who own multiple craft – although that number reflects only those who actually registered. Some projections indicate global sales of consumer drones will rise from 24m units last year to almost 70m by 2021.

In the UK, from 30th November it will be a legal requirement for owners of drones which weigh 250 grams or more to register the craft with the Civil Aviation Authority (CAA), and complete an online test. Crucially, pilots who fail to register could face fines of up to £1,000.

That said, drone legislation varies across the world, with virtually every country having its own formalities – the EU does not (yet) have a cross-border legislation – but the crux of the matter is that, as with all emerging technologies, the rate of advancement exceeds the pace of legislative evolution. Plus, the threat of penalties levied are unlikely to pose a real deterrent.

Where does all this leave F1? Is the sport equipped to thwart a drone attack, whether by activists or terrorists?

In order to answer this question, parallels can be drawn between grand prix venues and airports: both are high visibility installations of national interest, thousands of people present during peak periods, open perimeters measuring many kilometres, open activity areas, and non-stop radio transmissions galore; yet, when all is said and done, both are relatively soft targets.

Last December’s incident at Gatwick airport illustrates the potential consequences of a drone sighting during an F1 race weekend. After an unverified sighting of an ‘industrial class’ drone by a security officer on the evening of 19 December – just as folk were gearing up for Christmas travel – Britain’s second-largest airport was shut down, initially for a little over 24 hours. Once reopened, the drone ‘reappeared’, prompting another closure, and so on.

The authorities eventually reported 92 drone sightings. However neither the culprit nor their equipment were ever caught. A pair of local drone enthusiasts were detained but later cleared, One Sussex Police investigator even suggested no drone actually existed. Still, over 1,000 flights were diverted or cancelled entirely over three days and over 140,000 passengers had their festive seasons disrupted.

EasyJet alone calculated the cost of cancelling 400 of its flights at £15m, while policing costs amounted to half a million quid. The cause of all this: Unconfirmed sightings of a craft weighing less than the average check-in suitcase, and less than half that size.

During the crisis the authorities are thought to have used ‘Drone Dome’, a £2.5m Israeli-developed anti-UAV system that can either ‘soft-kill’ a drone by blocking its frequencies and seizing control of it, or ‘hard-kill’ the craft by overheating it. Similar technology is believed to have been used during last year’s G20 Summit in Buenos Aires and the Youth Olympics held in the same city.

If the authorities believed there to be a sufficiently real and present danger in Argentina to warrant a Drone Dome, why should a grand prix anywhere on the trail not be similarly endangered? In such an event, who would be the responsible authority?

First it must be stressed that security at circuits is the responsibility of the race promoter, working in conjunction with local authorities and police services, and not the FIA or Formula One Management. Consider the situation as being akin to a rock concert: Should the Rolling Stones play at Silverstone, the circuit/concert promoter are responsible for ensuring the safety of concert-goers, Mick Jagger isn’t.

However, the FIA’s International Sporting Code – which takes precedence over all other regulations save where expressly provided for – does take into account the potential need for UAVs in and around motorsport venues. Article 1.4 of Appendix H of the ISC states:

“Unmanned Aerial Vehicles (UAV), commonly known as drones, operated by commercial entities may only be used at competition venues when permitted by, and operated according to, the civil aviation regulations and laws of the country in which the event is being held and the policies of the local ASN responsible for the event.

“The use of a recreational UAV is prohibited. In any case, a UAV must never fly directly over any competition course or public area unless under the direct control of persons authorised by the event organisers, the race director or the clerk of the course, for safety or information purposes only.”

Note the reference to ‘civil aviation regulations and laws of the country’ – these, of course, vary according to territory and jurisdiction, and thus promoters work closely with police force and intelligence services, plus their circuit security, event stewards and appointed expert resources.

RaceFans approached two race promoters and Formula One Management for comment about their security protocols with particular reference to drones, with the response in all instances being broadly similar: “As you will understand, we cannot discuss the procedures in place to manage to security risks and incidents.”

30 comments on “How can F1 protect itself from a ‘drone strike’?”