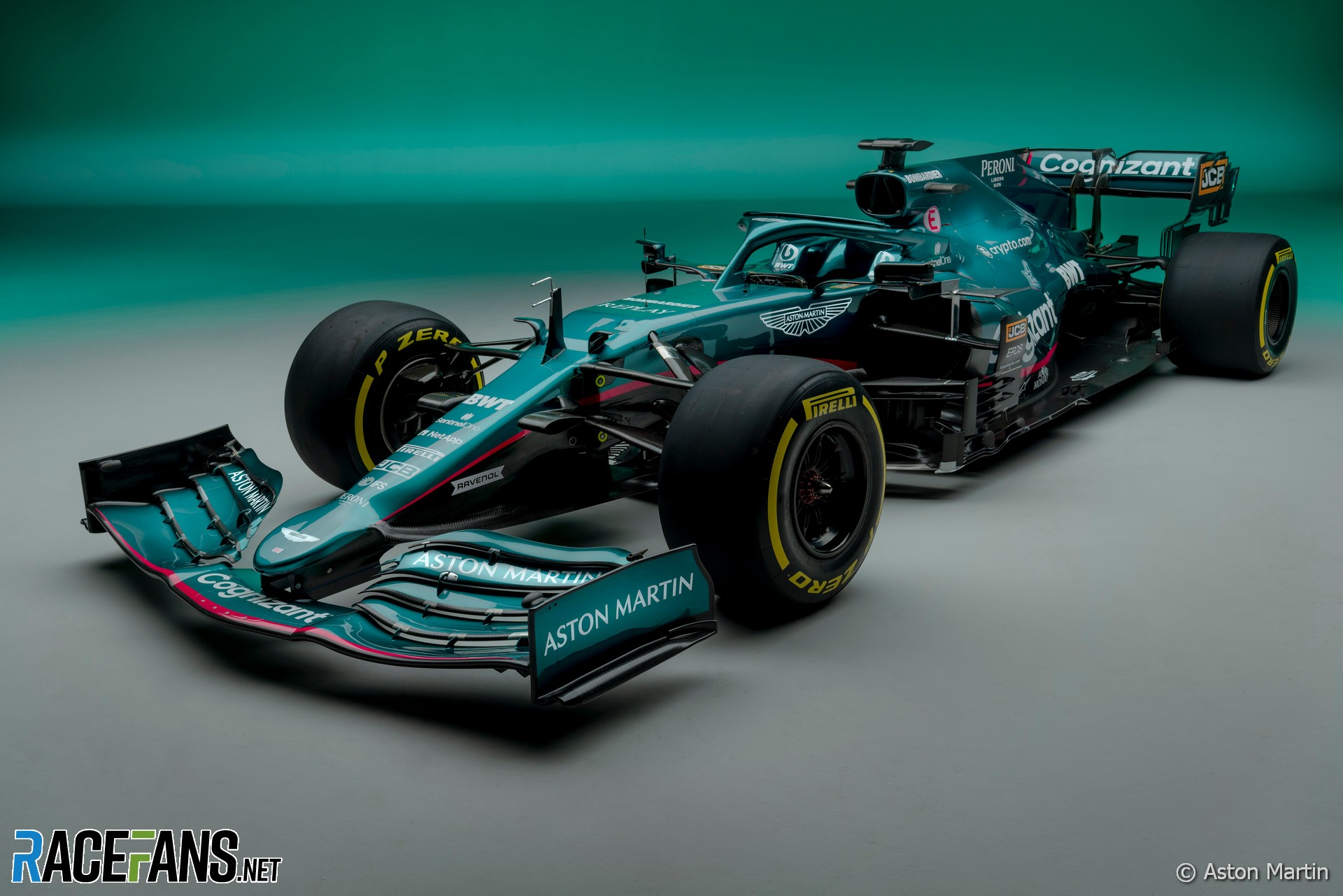 Aston Martin made a significant step forward in performance last year, when they competed as Racing Point.

The team made no secret of the new design philosophy which was behind that leap. Following its takeover by Lawrence Stroll’s consortium and subsequent cash injection, the team’s engineering division took the opportunity to follow the lead set by their power unit and gearbox supplier Mercedes.

The pay-off was immediate. On average, the RP20 was the third-quickest car over the season, and the team were only narrowly beaten to third place in the championship by McLaren. Had they not been given a 15-point deduction – when it was judged the team overstepped the mark in coping Mercedes’ rear brake duct design – Racing Point would have taken third place overall.

For their first season as Aston Martin, the team has retained its close links to the Mercedes team. It continues to use the Mercedes power unit, gearbox and rear suspension. And the similarities between the new AMR21 and last year’s dominant, title-winning W11 are obvious from the launch images of the new car.

While Aston Martin has the new, 2021-spec Mercedes M21 power unit beneath its green carbon fibre, the gearbox and rear suspension are 2020 Mercedes designs. As permitted by the regulations, this upgrade from the 2019 design was permitted without the team using any of the development tokens which were introduced this year to restrict spending.

The team was initially concerned that taking on Mercedes’ 2020 rear end could compromise them as F1 introduced a series of aerodynamic changes in this area at short notice, in order to reduce downforce levels following the tyre failures seen at Silverstone. To the team’s relief, this proved not to be a setback.

“I think all I can say is that it didn’t hurt, which was our biggest concern,” explained technical director Andrew Green. “We had already committed to the 2020 suspension and gearbox before the regulations changed. So there was a concern that potentially it was going in the wrong direction. But it soon became apparent that it at a minimum complemented them and it turned out to be a non-issue in the end.”

The late alterations to the rules, which reduced areas of the rear floor, diffuser and other parts of the car, proved “a big challenge mainly due to the lateness of the change”, according to Green.

“There were two changes: the first one took the car a step back and then the second one again even further. And it’s been a challenge over the winter to recover.

“I don’t think we’re where we would like to be but everything’s relative. So we’ll wait and see. We’re happy with what we’ve done so far. There’s still more to go. But I think we’ve given ourselves a solid foundation to work off.”

Aston Martin used its tokens to make changes its chassis, though Green would not be drawn on exactly what’s new. However the decision to use the 2020-specification Mercedes rear end was taken early and so this critical area of the car’s design, where the power unit is integrated into the chassis, has benefited from a fairly long gestation.

“The good thing is it moves us in the direction that we wanted to go anyway, which is great. We haven’t run the car yet, so I can’t say whether it’s going to be completely seamless or not, but so far it’s been absolutely fine.”

One obvious similarity between the new Aston Martin and Mercedes is what James Allison, technical director for the W12, described as its “sexy bump” (above), a result of the layout of the new Mercedes power unit. The AMR21’s is much more pronounced.

Like all teams, Aston Martin had to operate within rules which strictly limit what information customer teams may receive about their suppliers’ designs. These rules were revised following the controversy over their brake ducts.

“Obviously we’ve got no idea what Mercedes have done or been doing,” Green pointed out. “The concept on the car is 100% Aston Martin.”

While the team made great strides at the beginning of last year, few gains followed over the remainder of the season, and rival midfield teams were able to out-develop them. Green sees clear areas for improvement in their second year following Mercedes’ design lead.

“The initial direction, which was set almost two years ago now, seems a long way behind us,” he said. “We’ve learnt an incredible amount since then.

“It was a challenge for the group and I think along the way we’ve done a lot of really good work. But last year we also made a few mistakes as well. I think we definitely learnt from those mistakes and we’ve looked to correct them for the ’21 car which gives us a lot of optimism for the performance of the car going forward.”