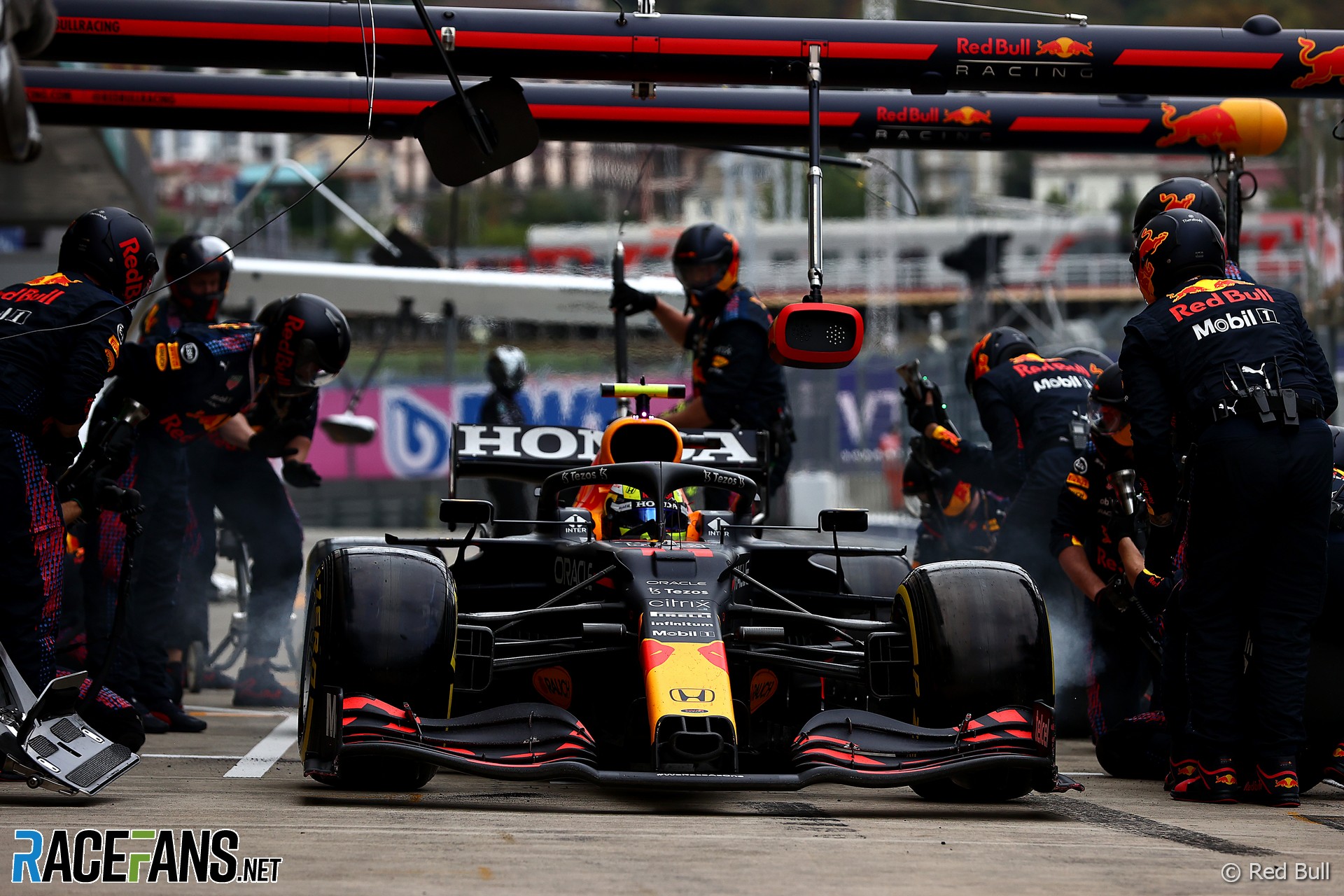 In the round-up: Sergio Perez’s slow pit stop during the Russian Grand Prix was not a consequence of the recent rules clarification by the FIA, says Red Bull team principal Christian Horner.

Pit error not due to rules tweak – Horner

Following Red Bull’s slow pit stop for Verstappen in the Italian Grand Prix, Perez lost around six seconds when he made his first pit stop at Sochi last weekend. However Horner denied it was linked to the FIA’s change in pit stop guidance during the summer break.

“We had a very slight delay on the wheel-off,” Horner explained, “and then [with] the clutch, he spun up the rear wheel, which then took more time to re-engage the wheel. So that was frustrating.”

The time loss meant Perez lost more ground than the team expected. “Otherwise he would have been a clear third,” said Horner. “But he got himself back into that position before the rain came.”

Horner insisted the delay was not linked to the rules clarification made in a recent technical directive.

“It wasn’t a TD issue. Unfortunately there was a slight delay in the wheel coming off and the clutch was released whilst he was on the stand and that then just compounded the problem. That’s what cost Sergio.”

Formula 1 has confirmed Sebastian Vettel continues to lead the Overtaking Award standings following the Russian Grand Prix. The new prize was announced during the summer break.

Giovinazzi was unable to communicate with the team’s pit wall for the majority of the race. This made managing key moments difficult, such as the late rain shower, when he stayed on-track with slick tyres longer than most drivers.

“It was a tricky race partly with a fuel management and then especially towards the end of the race with the weather and all that,” said Pujolar.

“Initially for a few laps he could hear us but we could not hear him. And after a few laps then we lost everything. So it was getting a bit difficult with what we wanted to achieve and affecting his performance mainly from mid to end of the first stint.”

This #F1 has known many different colors, it’s the #LotusE20 from 2012, but in my opinion that’s the best livery ! What do you think ? @AlpineF1Team pic.twitter.com/gp4qdYOgKt

"The complex plans to use the land to build an indoor arena for SEA Games 31, to be hosted here next year."

"The FIA and Formula 1 can today confirm that at the 2021 FIA Formula 1 Russian Grand Prix, between Monday 20th and Sunday 26th September, 4,858 tests for COVID-19 were performed on drivers, teams and personnel. Of these, 4 people tested positive."

"As he’s said many times before, Sarandos said Netflix isn’t interested in pursuing live sports rights, saying 'the next $10 billion' in the company’s content spending would be better invested in TV shows and movies."

Ferrari’s new driver is having an increasingly impressive season:

Sainz is really doing very well. Despite making many mistakes in his learning year, e.g. Baku, he is ahead of Leclerc in the championship after so many races. Certainly much better than what Vettel has done in 2019.
@F1fan-2000