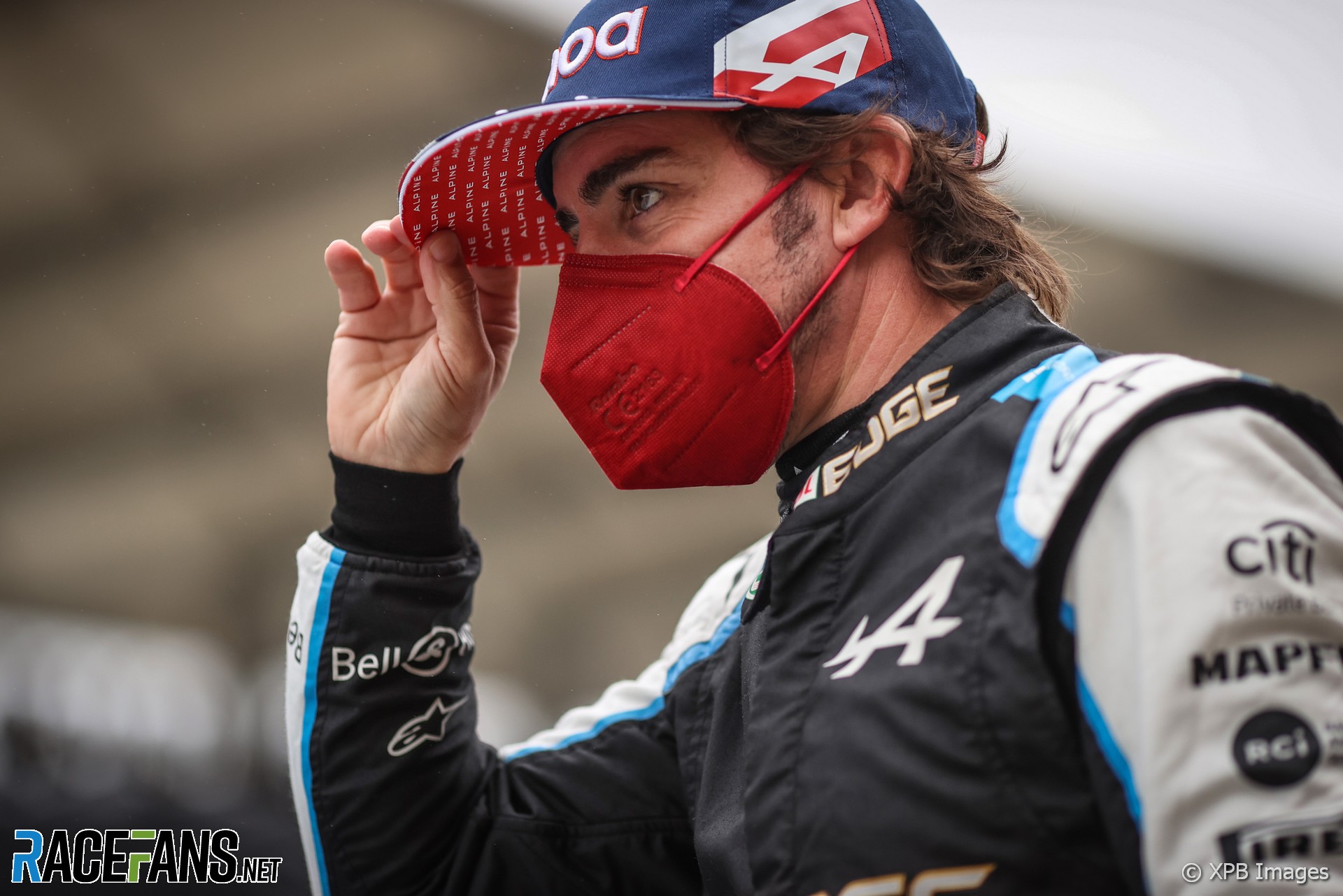 Fernando Alonso has taken aim at Formula 1’s stewards over their reaction to incidents in recent races.

The Alpine driver performed an eye-catching move at the start of the Russian Grand Prix by cutting across the run-off area at turn two. Asked about it ahead of the following race in Turkey, Alonso seized upon the opportunity to question whether incidents in Formula 1 are treated consistently by the stewards.

At Sochi the stewards decided against issuing a time penalty to Lando Norris for crossing the white line at the pit lane entrance later in the race. Alonso questioned why this had been treated differently similar past incidents.

This isn’t the first time Alonso has questioned the consistency of stewarding decisions. It has been a theme in his comments previously this season, overlapping with his growing suspicion that other drivers get away with more than he does.

In both of F1’s two races at the Red Bull Ring, Alonso accused rivals of moving or staying ahead of him at the start by using the run-off area at the first corner.

“The FIA should police more the track limits,” said Alonso after the first Austrian race. “In turn one I was the only one making a move into turn one at the start and the two cars that I overtook they missed turn one and the exit in front of me.”

He described the same after the following race at the same track. “I overtook Ricciardo and Leclerc this time and they went off-track the exit of one and they exit in front of me,” he said.

“Even more than that, they take the run into the next car in front from the slipstream into turn three. So I don’t know, I felt that was very unfair today, again.”

Did Alonso have a point? At the first race he clearly arrived at the first corner slightly ahead of Pierre Gasly and Charles Leclerc, both of which were on the outside of him, ran fully onto the run-off and rejoined the track ahead of him. The pair then collided and dropped behind him, so even if the stewards had penalised them it would have made little difference to Alonso’s race.

The second case was less clear-cut. Alonso again arrived at turn one on the inside with two cars on his outside, though he nosed ahead much later as they arrived at the corner. Leclerc, again, and Ricciardo ran wide at the exit and maintained their positions ahead of him.

Following these incidents, Alonso resolved to take a tougher line in future. Tellingly, he claimed his rivals had chosen to use the run-off areas on lap one in order to gain an advantage, rather than being forced off and benefited as a result of that.

“It’s written and it’s quite clear that on the first lap, they are a little bit more flexible on penalties and track limits because we are fighting,” said Alonso. “Sometimes you are forced to go outside the track because you are fighting and you are forced by another car and you take the run-off area.

“But it was not the case. It was just a pure performance decision to go outside and to keep the throttle on. It was no one side-by-side. So I don’t think that is a grey area. It was quite clear.”

Others may argue it wasn’t quite so clear. In Ricciardo’s case at the Austrian Grand Prix, he would have risked a collision with Leclerc and Alonso on his inside by not running wide. And, being on the outside, Ricciardo would have been the most vulnerable.

Asked about the incident almost three months later in Turkey, Ricciardo couldn’t recall it. But he was in the press conference where Alonso made his claim of “different rules for different people”, and said he could understand Alonso’s frustration.

“I sat in the press conference with him and I certainly could feel a bit of frustration in him,” said Ricciardo. “I think he obviously felt – and I’m not saying that didn’t happen – but he obviously felt at times this year that he was hard done by people gaining an advantage.”

Firm in his conviction that other drivers had deliberately cut across the run-off area at the start before and got away with it, Alonso did exactly that at Sochi, even practising his line through the designated route back onto the circuit to maximise his speed.

Having rejoined the track in third place and allowed two driver to pass him, Alonso then lost further places later around the first lap by running wide. Whether the stewards would have taken a different view of his behaviour at turn two without that is an intriguing unknown.

“I think it was his way of saying kind of ‘screw everyone, I’m going to make it really obvious and see how many people talk about it’,” said Ricciardo. “So I guess it was him certainly making a point of it.

“Of course it’s frustrating if someone goes off and passes you, you’re like ‘you’re not on the track’. Obviously he felt at times that it has been inconsistent. Maybe so. I mean, he’s probably the most experienced guy on the grid, so he probably knows better than most of us.

“I think the biggest one is you know if you’ve gained an advantage from going off the track, then you need to you need to do something about it and give it back. So I guess there is some inconsistency.”

The McLaren driver has first-hand experience of that inconsistency: At the Red Bull Ring last year Lance Stroll went unpunished for passing Ricciardo off the track. FIA Formula 1 race director Michael Masi later clarified Stroll should not have kept the position, according to Ricciardo.

Through the various controversies, Alonso has made it clear he wants a more rigid interpretation of the rules. He was involved in another incident during the second Austrian round when his final lap in Q2 was ruined when he caught Sebastian Vettel. Alonso made it clear it was not simply the case that Vettel was to blame, but the queue of drivers who had come to a near-stop ahead of him waiting to start their flying laps.

“I’m sure the FIA will have to learn as well and police this a little bit better because in the top category of motorsport, you cannot see turn nine and 10 with 10 cars waiting to open the lap at 5kph,” said Alonso.

“I think that has to be managed a little bit better in the top category and be harsh with penalties. This is a consequence of being too soft on penalties.”

Vettel was penalised but others ahead of him were cleared. The stewards ruled that although they had contravened the race directors’ guidance “given the situation that many drivers ended up queuing at this part of the circuit, the stewards determine that too many drivers contributed to the situation”. In short, Vettel was penalised for holding Alonso up, but those ahead who delayed Vettel were cleared.

Alonso made it clear the stewards should have stuck to the letter of the law. “There was a rule in place this weekend that you cannot slow down from nine to 10,” he said. “So when you see now 12 cars in front of Sebastian at 5kph between nine and 10, in my opinion, that’s a penalty for 12 cars.

“Also for Seb, because he didn’t let me go, but what happened with the other 11 cars, that is written that you cannot slow down between nine and 10.”

As Alonso pointed out, he isn’t the only person calling for the stewards to take a tougher line on incidents. “I also read Frederic Vasseur, the Alfa Romeo [team principal] saying the same thing, it was a surprise for many people.

“But sometimes I guess you need a driver or someone to say, to maybe open the eyes for more people. I think this year the consistency was not great and it was always like in the same direction.

“Probably the turn two incident in Sochi if it was another driver, no one will talk here but because I cut the corner it was a big thing, a big topic.”

Do inconsistent decisions by the stewards tend to go against Alonso as he suggests? Several of his rivals might disagree given the outcome of the deliberations which were going on when he spoke those words on Saturday in Istanbul.

Alonso was cleared of failing to slow sufficiently for double waved yellow flags in qualifying. Stroll, who slowed down around 15 seconds more than Alonso for the same incident, was deeply unimpressed. So was Pierre Gasly, who also criticised the stewards’ failure to penalise Norris.

“These last two events I don’t really understand the regulations,” said Gasly. “To me it’s either black and white, and these two situations for me were very clear.”

By taking mitigating factors into account when handing down penalties, the stewards inevitably create the possibility that similar misdemeanours may be handled differently. But Alonso’s experience surely shows there isn’t a pattern of favouritism lying behind that inconsistency.