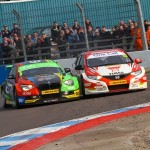 The group for BTCC fans.

Should this kind of driving be allowed in the BTCC?