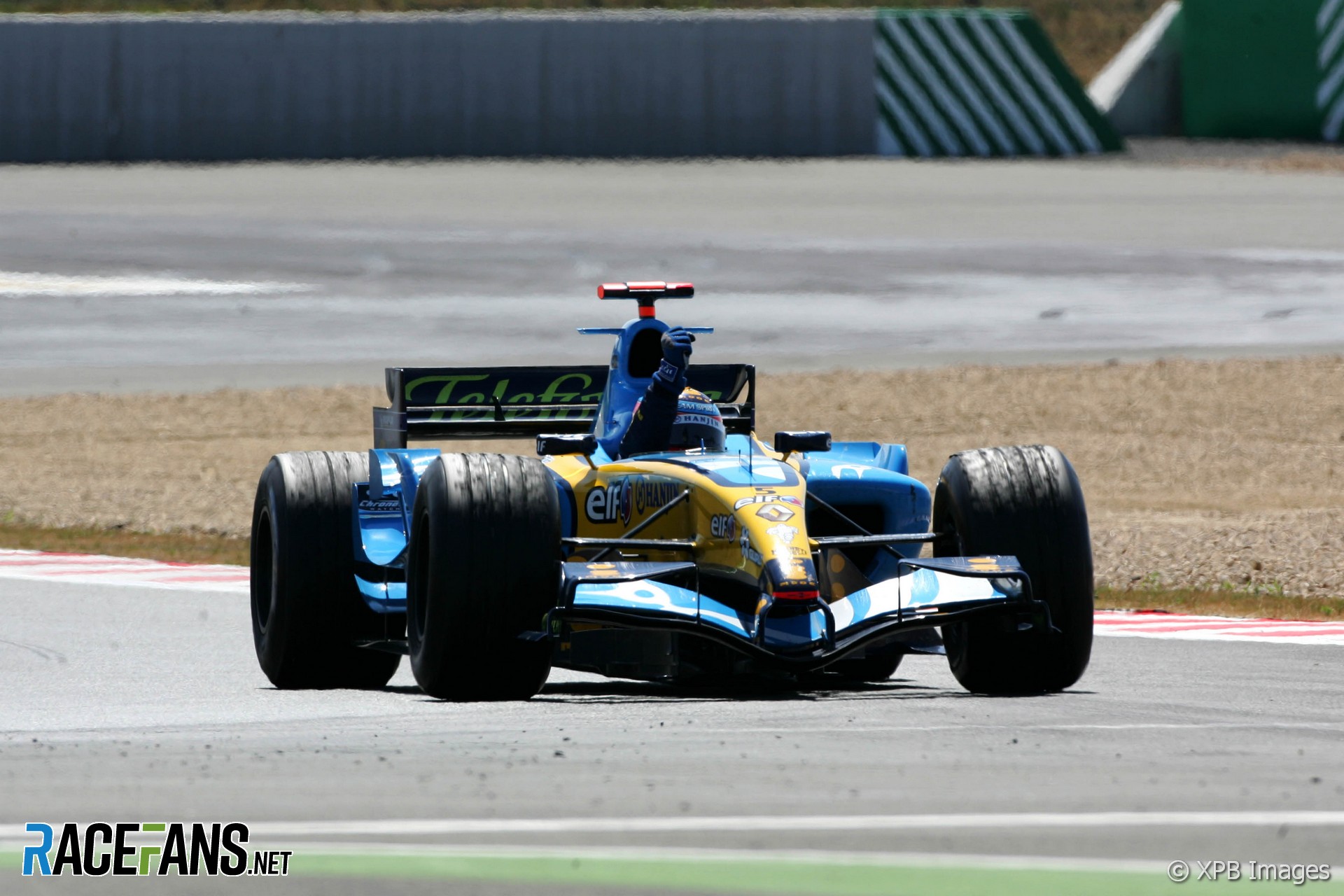 “Watch the Ferraris”, everyone seemed to be saying after the United States ‘race’. “They’ve made a big step forward.” Michael Schumacher unusually bullish, suggested as much after qualifying. But on the track, Fernando Alonso blitzed them all for his fifth win from ten.

It was not a thrilling French Grand Prix. Indeed, after the shame of Indianapolis, with so many people hoping for a good race, it was a pity that the Grand Prix circus at Magny-Cours when what it really needed was a Silverstone, a Suzuka or a Spa.

When Kimi Raikkonen’s engine went pop on Friday, the hopes for a competitive Grand Prix blew up with it. Alonso could run light, take the pole, and disappear from the rest of the field. And that is pretty much exactly, and all, that happened.

Relegated from third to thirteenth, Raikkonen gave chase, passing team mate Montoya on the way by stopping far later for fuel. Montoya was comprehensively outclassed by Raikkonen even before his hydraulics crippled his MP4-20 on lap 47.

Michael Schumacher qualified third but got bottled up behind second placed Jarno Trulli and, despite being clearly faster, never even looked like trying a passing move. His penalty for failing to make a move was to drop behind both McLarens after the first pit stops.

The first of the leaders to pit were Takuma Sato (four laps before team mate Jenson Button, explaining his superior qualifying pace) and Ralf Schumacher, on lap 16. Trulli and Michael Schumacher pitted together two laps later, Schumacher emerging ahead after taking on more fuel.

Giancarlo Fisichella pitted with Button, but emerged far later after an apparent fuel rig problem frustrated yet another race for the Italian. In galling contrast, Alonso pitted and resumed in the lead on the next lap without a hint of trouble.

He led from the pair of McLarens who had risen to the front by dint of their heavy fuel loads, Montoya leading Raikkonen at this stage.

Montoya stopped on lap 25, four laps earlier than Raikkonen. This ether meant that his qualifying pace had been greatly inferior to Raikkonen or that McLaren pitted him early to come out in front of a hard-charging Schumacher, who was lightly fuelled and would stop again in eight laps. It held off Schumacher’s challenge and elevated Raikkonen to second.

But at that point the race died. Raikkonen was unable to seriously attack Alonso’s gap and, although the Spaniard kept pushing, he never looked threatened.

Further back Sato was doing his level best to make the race interesting. He threw his car at Trulli’s at the Adelaide hairpin and skated off into the gravel. Another off at Estoril, partly caused by a spinning car, left him eleventh at the finish.

Fisichella’s bad day got worse as he stalled the car after his second stop. This allowed Button to move up to fourth but no further as he lacked the pace to challenge Schumacher. Indeed, the gaps between all the leading cars were more or less static by this stage, and there was no indication that even the blistering 53C track temperatures were causing major problems for either of the tyre manufacturers.

Minardi suffered two blow outs, but it transpired that these were caused by faulty valves.

Alonso took an impressive if relatively unchallenged win. Formula One’s public rehabilitation is going to need more dramatic events than this to restore its battered reputation – we’ll now see what Silverstone can deliver.