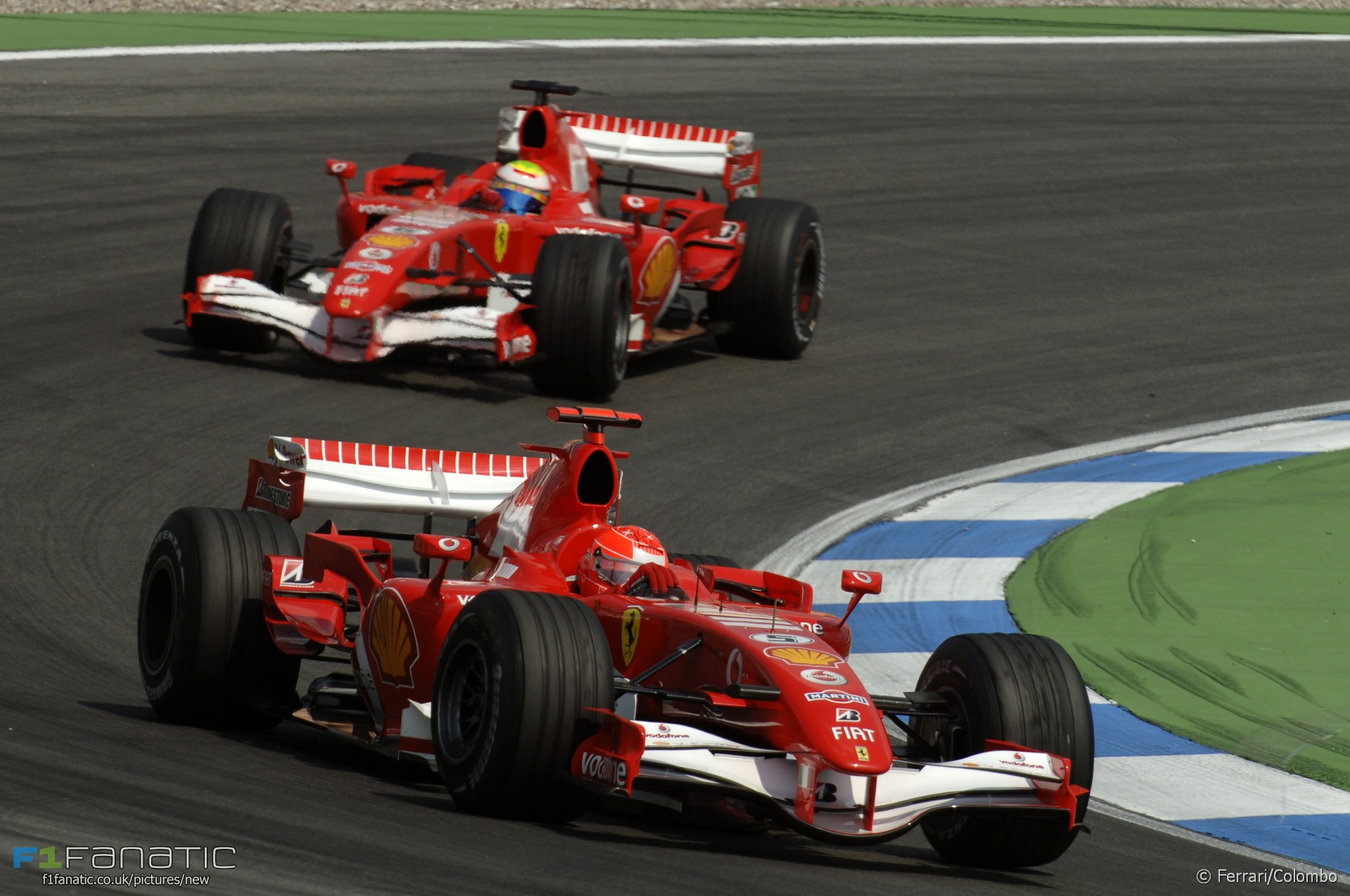 It was a Bridgestone day. The Ferraris cruised to an easy win, never even needing to approach the stunning pace they hinted at in qualifying.

The only reason they didn’t lock out the front row of the grid was that McLaren inexplicably gave Kimi Raikkonen only ten laps’ worth of fuel. But even with half Michael Schumacher’s fuel load, Raikkonen was only 0.135s faster.

Raikkonen was not the only surprise in qualifying. Jenson Button popped up in fourth place and, unlike Raikkonen, he was there more on merit than on a low fuel load. He was backed up by team mate Rubens Barrichello in sixth.

The Renaults were fifth and seventh with Fernando Alonso languishing five places behind championship rival Schumacher. Behind him were Ralf Schumacher and Pedro de la Rosa who provided the highlight of qualifying by running into each other at the Spitzkehre hairpin.

Before the race Button observed that if Alonso managed to pass him at the start from three places back, “then we will need to look at our starts.”

Having said that the Renaults predictably mugged both the Hondas – but Button fought back. He picked off Alonso at the Spitzkehre, and squeezed past Fisichella on the second lap.

Up front the top three held their positions but further back there was chaos. Ralf Schumacher incurred damage tipped David Coulthard into the air at the hairpin but both continued.

Nico Rosberg slammed his Williams into the wall trying to pass a Midland, and both BMWs were pitting for repairs at the end of the lap having hit each other.

Up front Raikkonen was revelling in short-lived glory. He pulled a gap of three seconds over Schumacher before reality caught up with him and he pitted very early on lap ten. It was to be his first of three stops but he was stationery for over 15 seconds as his crew struggled with the right-rear tyre.

From the lead, he resumed eighth on lap eleven behind Schumacher, Felipe Massa, Button, Fisichella, Alonso and Webber.

The pace of the leading Ferraris began to show as Button quickly dropped further behind – and then pitted on lap 15, revealing how quick the red cars were, even with more fuel on board.

Alonso was dropping back from team mate Fisichella and both were losing over a second a lap to the Ferraris. Fisichella pitted with Massa on lap 19, and their team mates on the next lap, revealing how far off the pace Renault were.

It was clear, then, that this was a Ferrari race. But Mark Webber’s speed began to hint that the Bridgestone tyres were the root of their performance advantage.

From eleventh Webber had the advantage of a heavier fuel load and ran to lap 28 before pitting. He came out of the pits ahead of Alonso, and it briefly looked as though the reigning champion would struggle to score any points.

Four laps later Jacques Villeneuve crashed heavily at the last corner. He had struggled with the car since the repairs to his front wing on the first lap, and replays suggested that something had broken on the car, sending him off.

He joined team mate Nick Heidfeld in retirement, who retired after the lap one melee. Sakon Yamamoto had retired on the sixth lap after his Grand Prix debut never really got going.

Barrichello’s Honda engine had also blown after his first stop on lap 18, and Takuma Sato joined his team mate in retirement on lap 39 – an inauspicious debut for the new SA06.

Behind the Ferraris there was little racing to speak of. Fisichella began to struggle with the balance of his Renault and was passed by Alonso after their second pit stops. Webber, ahead, was involved in a strategic battle for third place with Button and Raikkonen.

Ralf Schumacher was suffering a torrid weekend. His qualifying dilemma had been compounded when his team waved him out into the path of Button, for which they were fined.

After his run-in with Coulthard he picked up a drive-through penalty for speeding the pits (as did Christijan Klien). In the meantime his team mate Jarno Trulli had made his way into the points-paying positions from the back of the grid after yet more problems in qualifying.

Raikkonen made his third pit stop on lap 55 and came out side-by-side with Mark Webber. With the inside line for the second turn he was able to keep the position and set off in pursuit of third-placed Button.

But Webber’s strong run wasn’t to last much longer. He suffered his sixth retirement due to mechanical failure of the season, robbing him of a likely fifth place.

In fact he could quite easily have finished fourth as Raikkonen was able to catch and pass Button for third with little difficulty. Alonso began to reel Button in but his charge was blunted on lap 61 when he speared off into the gravel at the stadium.

This dropped him back into the clutched of Fisichella and Trulli. Although Trulli would have dearly loved to put one over his old Renault boss Flavio Briatore, who fired him gracelessly in 2004, the Renaults had just enough grip left in their well-worn Michelins to stay ahead.

Up at the front Michael Schumacher romped home to a third consecutive win, and his second on home ground this year. He has narrowed Alonso’s championship lead to just 11 points.

Massa, second, moves into third in the drivers’ championship. Raikkonen’s third place suggested that better times could be around the corner for McLaren. Button’s fourth was even more welcome.

Alonso, Fisichella and Trulli crossed the line one after the other and the final point was taken by Christian Klien.

Schumacher made his trademark victory leap with scarcely a bead of sweat on his face despite the heat. He never had to use the full potential of the Ferrari-Bridgestone combination throughout the race.

If Renault are not able to claw back any of the performance they lost with the banning of the mass damper system they pioneered, the drivers championship may not be much of a battle in the final races.

Update: Following the end of the race the two Midland-Toyotas, which finished 13th and 14th, were disqualified by the stewards for running rear wings that were deemed to flex illegally.