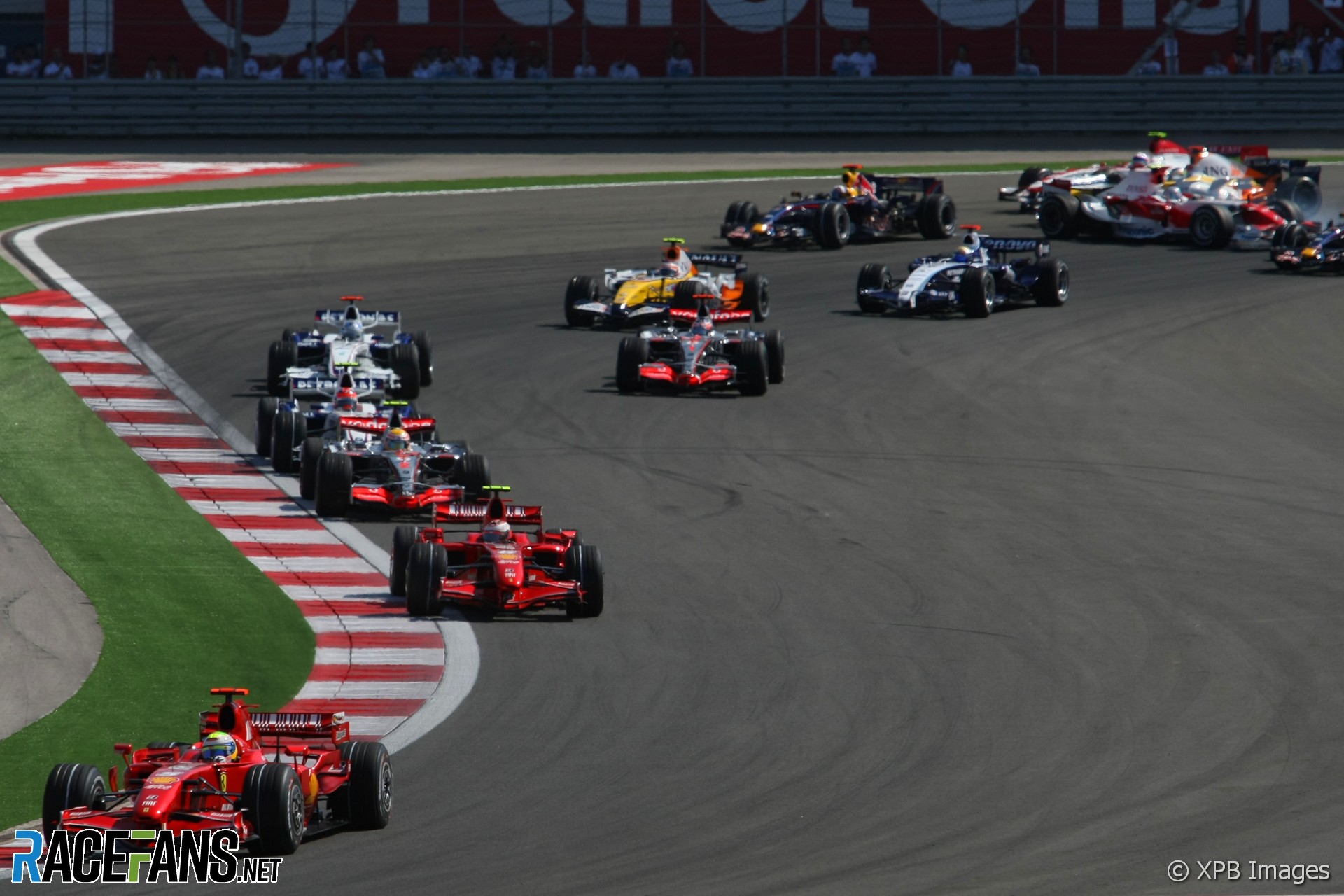 Felipe Massa kept team mate Kimi Raikkonen at sword’s length for the entire race to repeat his triumph at the venue where he took his first victory last year.

But Lewis Hamilton’s title hopes took a knock when a tyre failure robbed him of a podium finish – letting team mate Fernando Alonso in to take third from him.

The dirty left-hand side of the Turkish Grand Prix start/finish line proved the undoing of the McLarens at the start. Kimi Raikkonen out-dragged Hamilton with ease and Alonso was mugged by both the BMWs.

Giancarlo Fisichella hit the brakes too late at the first corner and punted Jarno Trulli into a spin. The Toyota narrowly missed both Red Bulls and forced several cars off the track including the two Super Aguris.

Massa completed the first lap in the lead with Raikkonen behind and Hamilton a little further back. Kubica and Heidfeld were ahead of Alonso.

Fisichella had fallen back to 12th with Anthony Davidson right behind him, and Rubens Barrichello moved up to 16th from 21st.

The three leaders pulled away from Kubica’s BMW while Alonso tried in vain to pass Heidfeld.

There wasn’t much action going on at the front but Jenson Button was making headway from his starting position of last. He took Adrian Sutil for 18th on the second lap and then moved up to 17th.

Trulli took that position off him but Button took it back when the Italian ran wide at turn nine on lap 11. Five laps later Button moved past team mate Barrichello for 16th.

Kubica was the first driver to pit with a very early stop on lap 12, switching from soft tyres to the harder compound.

At the front the Ferraris were able to lap fractionally quicker on the soft tyres than Hamilton could on the harder rubber. Raikkonen was easily able to keep within a second of Massa, while Hamilton had fallen 2.5s back.

Heidfeld pitted on lap 17 which gave Alonso a one-lap window of opportunity to pass the BMW. He duly delivered, and when he pitted on lap 18 he resumed ahead of Heidfeld, with Kubica further back having fallen behind the pair of them.

Nico Rosberg and David Coulthard pitted on the same lap as Heidfeld – and when Coulthard came back out on the track he was passed by Button who had also squeezed ahead of Ralf Schumacher.

Raikkonen pitted on lap 18 with Alonso – but 16 seconds earlier, such was Alonso’s delay. Massa stopped on the next lap followed by Hamilton lap 20. The top three stayed in the same order but Hamilton came out closer to Raikkonen than before.

Massa also came out directly behind Kovalainen, who led for a lap and delayed the Ferrari momentarily.

But it didn’t matter – once Kovalainen had pitted on lap 21 Massa was able to stretch ahead. By lap 33 Raikkonen was 2.1s behind and Hamilton a further 3.7s down. Alonso had briefly begun to take a few tenths off Hamilton, but ran wide at turn eight and the gap stabilised at 14s.

Kovalainen came out of the pits ahead of Kubica whose unusual strategy did not seem to be helping him. The Pole also dropped behind Nico Rosberg.

Raikkonen suddenly caught team mate Massa as their pit stops drew close – cutting his team mate’s advantage to just 0.4s on lap 38 as they hit traffic. The Finn made his second pit stop on lap 41, and Massa came in on the next lap, holding the lead easily.

From that point on it was clear that they were told not to race each other – Raikkonen no doubt ruing the mistake he made in qualifying.

Hamilton was approaching his pit stop when on lap 43 his front right tyre exploded in the braking zone for turn nine. With the remains of the tyre flapping around he hobbled into the pits (where, ironically enough, Alonso was being serviced) to take on the softer compound tyres.

He came back out in fifth place having fallen behind Alonso and Heidfeld, and with a damaged front wing couldn’t do anything to catch the BMW. Meanwhile Kovalainen’s sixth-placed Renault drew ever closer.

Throughout the field there were cars in close company with each other but apparently incapable of passing. Kubica was within a second of seventh placed Rosberg and, further back, Trulli and Barrichello were stuck behind Vitantonio Liuzzi.

Massa cruised home to victory while Raikkonen repeated his trick from the Hungaroring of setting the fastest lap in the dying stages.

Alonso battled well to take the final podium finish but had been somewhat fortunate to take points off Hamilton – and Hamilton was equally lucky to score any points at all.

Heidfeld, fourth, added to his haul with Kovalainen sixth, right on the back of Hamilton’s McLaren at the line. Rosberg was an impressive seventh, bagging more precious points for Williams, and Kubica’s strategy left him eighth.

Fisichella finished outside the points and falls behind his junior team mate in the championship. Coulthard was tenth head of the last unlapped driver, Alexander Wurz.

Ralf Schumacher was 12th ahead of Button who drove a hard race for little reward. Davidson wasn’t able to move forward from his excellent qualifying performance and finished 14th.

The remaining finishers were Liuzzi, Trulli, Barrichello, Takuma Sato, Sebastian Vettel, Sakon Yamamoto and Adrian Sutil. The only driver to retire was Mark Webber – whose Red Bull failed on the ninth lap.

2 comments on “Massa triumphs in Istanbul as Hamilton suffers setback”