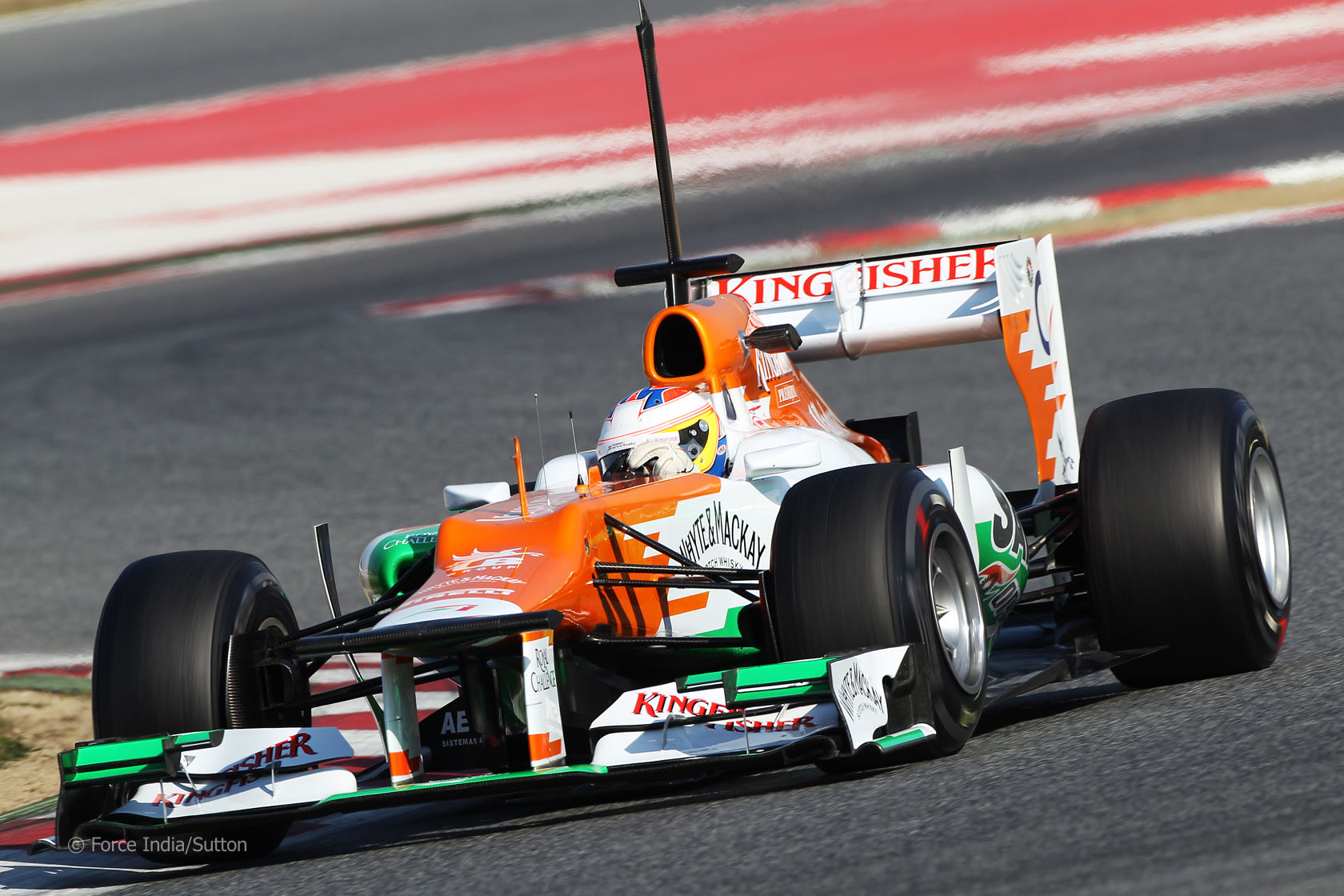 Force India have taken a brave gamble with a relatively inexperienced driver line-up in their bid to move up the F1 pecking order in 2012.

Will it pay off?

Paul di Resta acquitted himself superbly well in his first season of F1 and was often a match for team mate Adrian Sutil.

Despite a few scrapes early in the season Di Resta completed more racing laps than any other driver last year – a particularly impressive feat for a rookie.

He faces a different challenge in his second year of F1, without a more experienced team mate to learn from and with an equally promising talent occupying the sister car.

Formula Three Euroseries champion, GP2 champion at his first attempt, and of course that sensational pole position for Williams in his first season of F1 in 2010: Nico Hulkenberg’s credentials mark him out as a promising talent for the future.

Having lost his Williams seat mainly due to financial reasons, Hulkenberg impressed Force India as an occasional Friday tester in 2011 and has won promotion back to the top flight.

Hulkenberg has already said he expects di Resta to have the upper hand in the opening races thanks to his more recent racing experience, which sounds like a wise piece of expectations management.

Heading into the first race of the season Hulkenberg is pleased with the team’s progress so far but expects a close fight: “You always want more time in the car, but I think we can be pleased with how our three tests have gone.

“We still need to find some more performance because the whole grid looks very close and competitive, and I expect the grid in Melbourne to be extremely tight.”

Force India have made consistent progress since Vijay Mallya took over the Spyker team (previously Midland and, before that, Jordan) in 2008. They were a solid sixth in the constructors’ championship last year and were the fifth-fastest team at the end of the season.

They face a challenge to improve their position as the midfield battle looks set to be fiercer than ever this year. Force India have shown some speed in testing but so have Lotus.

Technical director Andrew Green reckons the team are close to recovering all the downforce lost due to the new restrictions on exhaust-blown diffusers. The VJM05 is visibly different to its predecessor and Green called it “a big departure” from their previous design.

However the VJM05 retains ones major strength of the team’s previous cars – they will continue to use Mercedes engines and McLaren’s gearbox and hydraulics this year.

It’s clear the deal has played a significant role in propelling the team forward in recent years. But the latest extension, in February last year, only takes them up to the end of this year.

Renewing the deal will not come cheap. Last year the Sahara Group bought into the team, bringing with it a significant injection of income which the team will need to continue making progress in F1.

It comes as other areas of Vijay Mallya’s business empire come under pressure, such as his beleagured Kingfisher Airline.

For his F1 team, a lot hinges on how well their comparatively inexperienced driver pairing performs. Both had very credible rookie years in F1 and if they can build on that Force India just might crack the top five in 2012.

But it’s a big ask – the five teams that finished in front of them last year each have at least one world champion driving for them in 2012.

Do you think Force India can finish in the top five in the constructors’ championship this year?

Which of their two young drivers will have the best season?