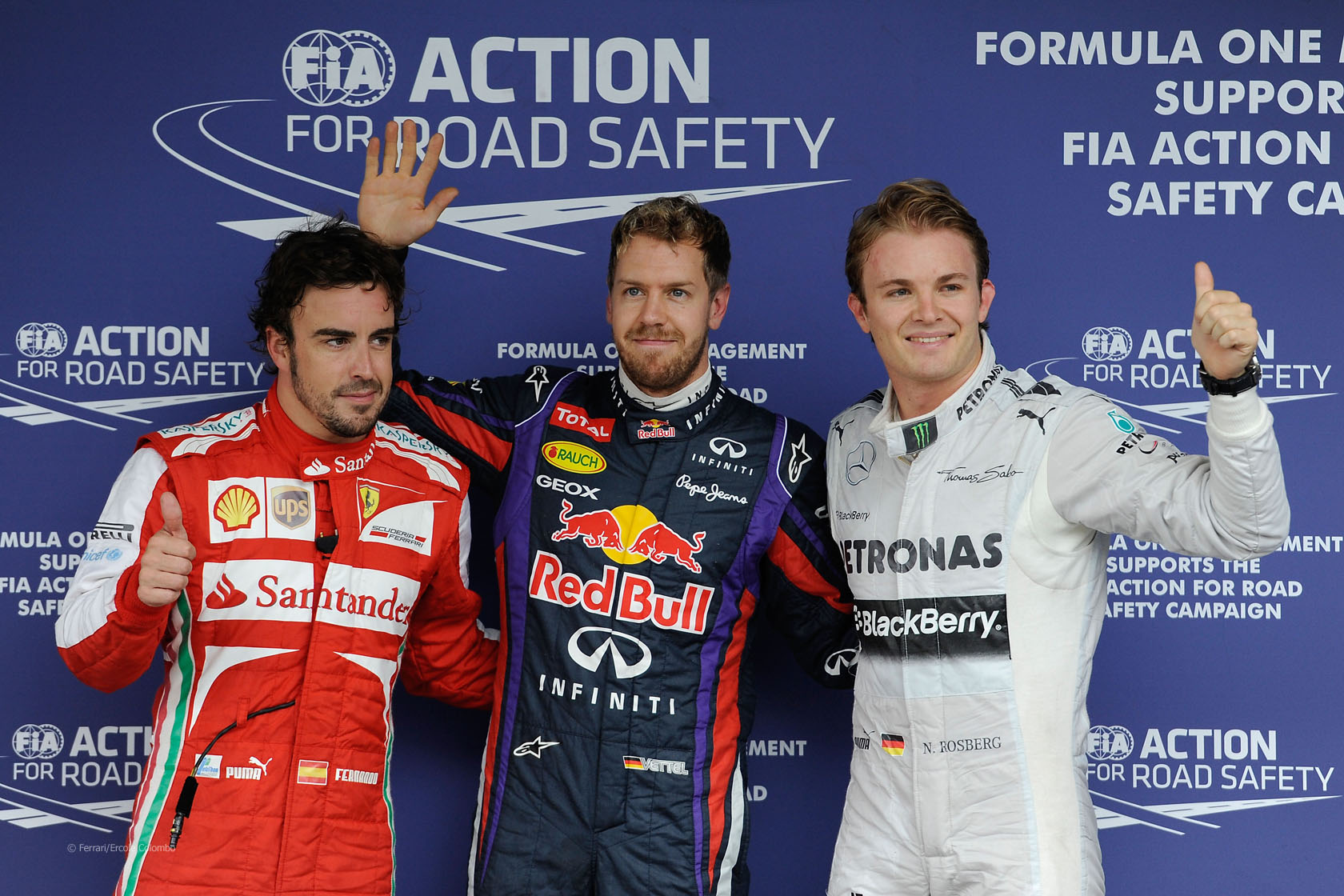 Rain fell periodically during the session and a sustained downpour forced Q3 to be postponed by 40 minutes. Once it got going, the flying Vettel proved out of his rivals’ reach for the ninth time this year.

Nico Rosberg will join him on the front row of the grid while Fernando Alonso claimed third for Ferrari.

Qualifying began on a very damp track but with more rain threatening the drivers did not waste time getting started. Within moments of the pit exit light turning green all 22 drivers were circulating.

Lewis Hamilton was the first driver to get a lap in and those drivers like him who were able to set a time early on were best placed to get through.

Several drivers further back found themselves in traffic, including the Lotus duo. Romain Grosjean expressed his dissatisfaction at being held up by Max Chilton while team mate Heikki Kovalainen was delayed by both Caterhams.

Both made it through, however, as did Mark Webber after making a timely improved just as the weather began to worse. That lifted him out of the bottom six at Jean-Eric Vergne’s expense.

With the track conditions worsening most of the drivers headed for the pits apart from a handful who were facing the likely threat of elimination. Both Marussias returned to the track in an unsuccessful attempt to get off the back row.

The only driver who was able to escape the bottom six with his final effort was Vergne, who moved ahead of team mate Daniel Ricciardo. Pastor Maldonado and Esteban Gutierrez.

A similar situation unfolded at the start of second practice with all of the remaining 16 drivers quickly joining the track as the session began.

Nico Rosberg led the times initially but said he hadn’t got his tyres fully up to temperature. Moments later Vettel took the fastest time off him.

The rain held off for much of the session and as lap times fell drivers returned to the pits for fresh sets of intermediate tyres for their final efforts. Nico Hulkenberg, who had been last of the 16 runners, vaulted up into the top ten.

The two Toro Rosso drivers, who had only narrowly made it into Q2 to begin with, also claimed places in Q3. But Sergio Perez’s attempt to make it into the final ten on his last appearance for McLaren ended in disaster as the rain returned in the final minutes of Q2.

Perez ran wide onto the kerb at the exit of Subido do Lago and the MP4-28 snapped sideways. He struck the barrier on the inside of the circuit with both ends of his car, but climbed out unhurt as the session came to an end. That confirmed his elimination along with team mate Button on a disappointing day for McLaren.

The rain intensified while Perez’s car was being recovered, forcing the start of Q3 to be postponed several times. It eventually began 40 minutes later than planned on a track now sufficiently soaked for wet weather tyres to be necessary, for the first few laps at least.

After a single run on the wets, most of the drivers decided straight away that the track was now dry enough for intermediate tyres. Grosjean abandoned a lap which was on course to be quickest in order to make his switch to intermediates.

He went quickest after returning to the track but those who waited until later to run improved more quickly. The Lotus driver’s last run was only good enough for sixth.

Ferrari held their drivers in the pits between runs to give themselves the optimum running slots for their last two flying laps. It worked superbly for Alonso, though having gone second with his first run he dropped to third at the end, which nonetheless represented a significant improvement on his recent grid positions.

But no one had an answer for Vettel, who was immediately a full second ahead if his rivals – including team mate Webber – with his first attempt on intermediate tyres. Rosberg joined him on the front row, but the pair were separated by over six tenths of a second in the end.

63 comments on “Vettel on pole again after rain interrupts qualifying”