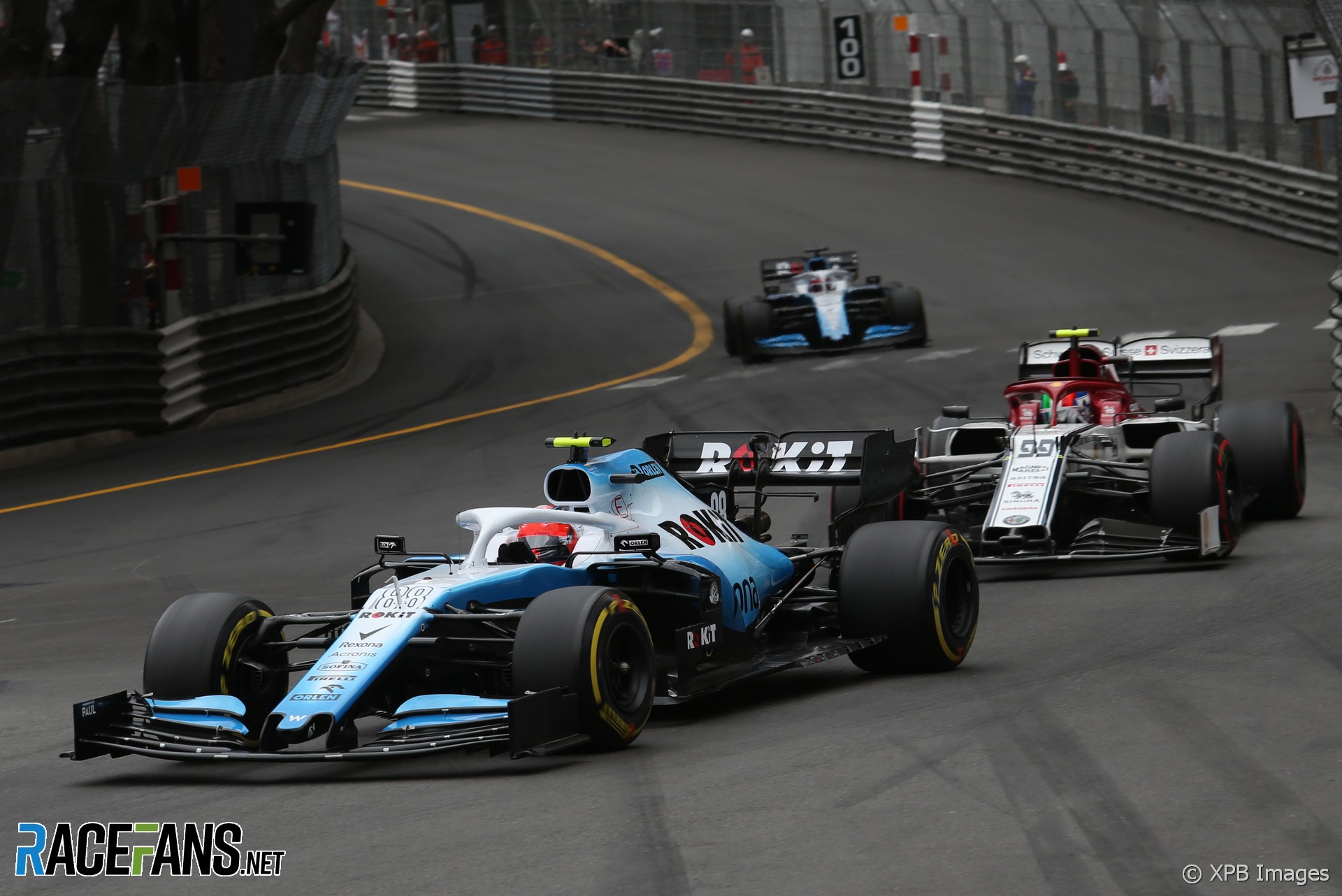 He ran ahead of George Russell early in the race but when told after the chequered flag his team mate had finished three places ahead of him, Kubica suspected the team’s strategy was responsible.

“I thought the driver who is in front gets priority over who is behind?” Kubica asked as he coasted in. “Copy that, we’ll check when you get back here.”

Having qualified last, Kubica got ahead of Russell and Antonio Giovinazzi at the start. Behind them Rusell, who’d started on the same C4 medium compound tyres as Kubica, was losing touch.

Then Charles Leclerc tangled with Nico Hulkenberg, and dropped back into the field with a disintegrating tyre. This had two effects on the Williams drivers’ races. First, it brought Russell back onto the tail of Kubica and Giovinazzi. Second, the Safety Car was deployed, which gave them an opportunity.

The leading drivers – Lewis Hamilton, Valtteri Bottas, Max Verstappen and Sebastian Vettel – had a big enough gap over the rest of the field to be able to make pit stops. The next did not, and those who did pit largely suffered. Daniel Ricciardo and Kevin Magnussen both pitted, and as a result fell from fifth and sixth before the Safety Car to 10th and 14th in the final classification.

For most drivers, staying out was the best choice to maintain track position over a rival. But at the back of the field the calculation was different. Russell, running last, had nothing to lose by pitting. He was also suffering with “massive front-right graining”.

Crucially, Russell had the foresight to realise his team were likely to want him to pit. When he approached the pit lane entrance under the Safety Car period he asked the team “are we boxing?”, then slowed almost to a standstill as he waited for a reply. “Box box box”, they finally answered.

At the restart Kubica was still ahead of Giovinazzi. But the Alfa Romeo driver then tried to ‘do a Leclerc’, dived for the inside of the Williams at Rascasse, and knocked the FW42 into a spin. Russell dodged around the delayed pair.

Once up and running again, Williams adjusted their timing of Kubica’s pit stop based on his feedback. They originally wanted to extend his stint, and bring him into the pits as the leaders caught him, to minimise the time lost due to blue flags.

But Kubica told them “it will be difficult to go so long”. “Your pace at the moment is good,” advised his engineer, noting he was four-tenths of a second quicker than Lando Norris ahead. “I don’t care what the others are doing,” answered Kubica. “I need to know what about rear tyre temps. The rears are fucked.”

The team called him in early, sending him out on a set of hard tyres. “We can push on this set, bring it in,” Kubica was told. “I already know what to do,” replied Kubica, who was now last. He eventually managed to regain the place lost to Giovinazzi, who was penalised for the collision, but Russell was by now well up the road.

It was a frustrating race for Kubica, who with better luck might have led his team mate home for the first time this year. But Russell’s quick thinking behind the Safety Car, and Giovinazzi’s ill-judged lunge, put paid to that.

25 comments on ““I thought the driver in front gets priority?” Kubica’s radio query explained”