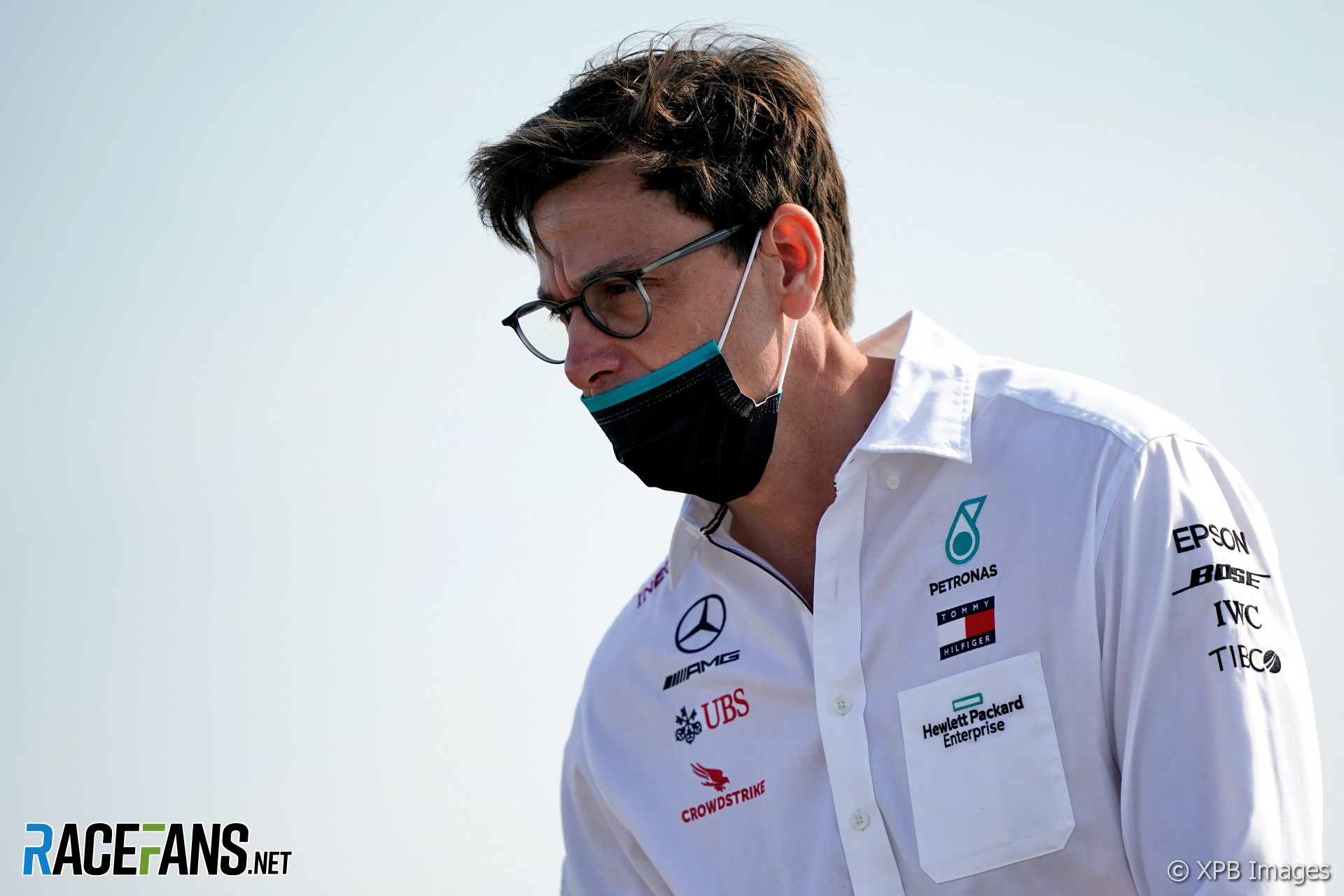 Mercedes team principal Toto Wolff has no concern his team could be found in breach of the rules if appeals against the FIA’s decision on Racing Point go ahead.

Five teams – half of the Formula 1 grid – have given the FIA notice of their intention to appeal Friday’s verdict on the cars dubbed the ‘pink Mercedes’. The stewards found Racing Point broke the rules by using parts received from Mercedes as the basis for designing the rear brake ducts on its RP20.

Racing Point has obvious reasons for contesting a verdict which will cost them €400,000 (£360,000) and 15 constructors championship points. Four of their rivals – Ferrari, McLaren, Williams and protest originators Renault – have various objections to both the decision, which allows Racing Point to continue using the disputed ducts, and sanction, which they consider too lenient.

A change in the regulations between 2019 and 2020 is central to the row. Last year teams were allowed to obtain brake ducts from rivals; this year brake ducts were redefined as ‘listed parts’, meaning teams must design their own.

Racing Point was found in breach of the sporting regulations because the rear ducts they are using last year are modelled on those designed by Mercedes last season. Crucially, while Racing Point had both front and rear Mercedes brake ducts last year, it never raced the rear ducts.

While the team has been penalised for using the parts, the FIA has also determined they should not be barred from continuing to use them, as the parts conform to the technical regulations and the team cannot “unlearn” the design information they have obtained.

Wolff believes the FIA “tried to act sensibly” in its judgement.

“I’m obviously not an integral part of this protest so I’m not sure I should really comment on the case, speaking for Racing Point,” he said. “As far as I have read the verdict, I think that because the regulations are tremendously complicated, and there has never been a situation where a non-listed part because a listed part, that the FIA tried to somehow bridge the gap of finding a solution that was acceptable to all parties.

“Obviously for Racing Point, they strongly feel that they haven’t been in breach. As it has been found out the possible breach was that they haven’t designed something – the rear brake ducts – from the beginning and it’s not their proprietary design. The breach has happened and they cannot unlearn what they already know. They have had these brake ducts on the car. They can also not change them.

“So the consequence would be, ‘do you want to disqualify a team from the whole championship?’ Because there is no way of taking those brake ducts away. As a matter of fact, if they were to design them again themselves, the same product would come out.”

In their verdict the stewards noted “a complete set of Mercedes 2019 [brake ducts]… arrived at Racing Point on or about January 6th 2020.” Racing Point CEO Otmar Szafnauer said they were supplied “as spares to run in winter testing” in case they did not finish work on their own parts in time.

The stewards judged this was a breach of the regulations, albeit not a significant one, “because there was nothing in the transfer that had not been legitimately provided to Racing Point in 2019 under the then in force regulations.”

Wolff said the verdict showed Mercedes was “not involved” in Racing Point’s breach of the rules. “We feel 100% comfortable with our position,” he said.

“We’ve read the rules over and over again. The verdict that came out is extremely complicated. It comes up with an interpretation that is new. New to all of us.

Wolff insisted he has no concerns over any possible ramifications for Mercedes if the case goes to appeal.

“At the end, to be honest, there is zero worry on our side – and when I say zero, I mean zero – that we were in any breach.

“Nor do I think that Racing Point was in breach. And I believe that if that would go to the ICA, it would be probably a complex matter, because it’s very technical – but I doubt there would be any outcome [for us].”