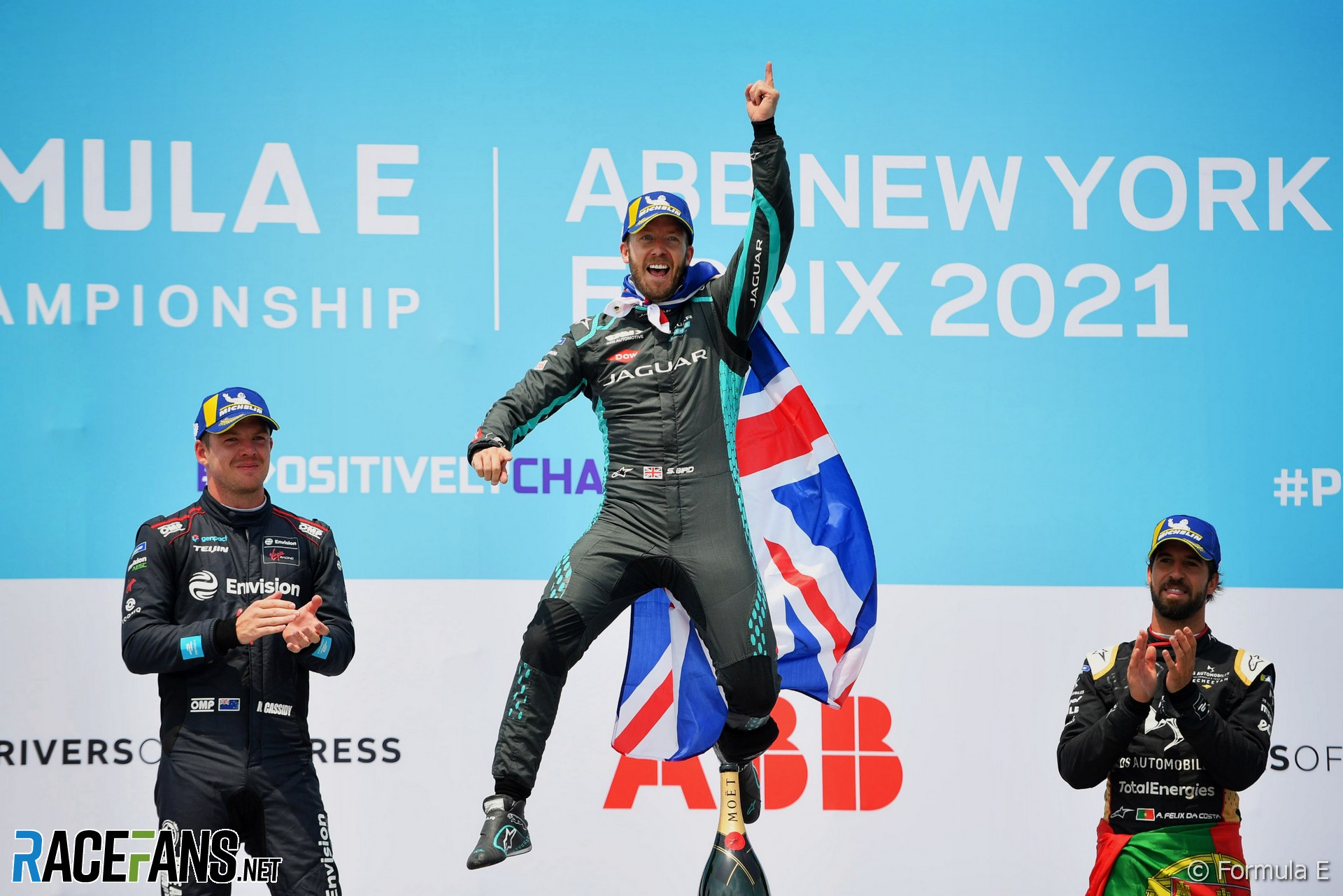 Sam Bird too the win at Formula E’s second New York round, taking the championship lead after arriving at the double-header weekend 11th in the standings.

Jean-Eric Vergne’s car developed a powertrain fault during qualifying, preventing him from setting a time and he was due to start the race in 24th. However, his car failed to get away from the grid and a Full Course Yellow was called on the first lap while his car was retrieved.

Racing restarted quickly and Bird was again able to get away, as he had at lights out, with the lead. Team mate Evans tucked in behind, defending from Cassidy and the three were able to follow each other cleanly while the Jaguar cars took their first Attack Mode together.

With 34 minutes remaining, pre-race points leader Edoardo Mortara clashed at turn seven with Jake Dennis. The two were fighting side-by-side when they encountered a stray front wheel cover from an earlier incident lying in the middle of the track, forcing both to avoid it. Dennis clipped the back of Mortara’s car, sending him into the barrier. Mortara was able to rejoin and continue the race but from the rear of the pack, well out of contention for points.

After the first 15 minutes, the top three drivers had been able to build a second-and-a-half lead on the Porsche cars of Wehrlein and Andre Lotterer. Whether because they were driving very close to each other or due to a genuine lack of pace, the two seemed to be falling away from the front runners.

That gave the Jaguars an opportunity to cover off each other for their second Attack Mode activations, Bird able to take his with 27 minutes to go, Evans easily blocking Cassidy from threatening the lead.

Antonio Felix da Costa had been stuck behind the two Porsches for some time but was able to pass when they followed each other through the Attack Mode activation zone, letting him start the work of catching up to the top three. Sergio Sette Camara held off Alex Sims for seventh for most of the race but with a 2% energy deficit was forced to concede at the 17-minute mark.

Moments later Lucas di Grassi and Sebastien Buemi clashed at turn six. Buemi was turned around on track and the two were placed under investigation, Di Grassi taking ninth place and Buemi rejoining in twelfth.

By the final 10 minutes of the race Jaguar’s hopes of a one-two were in serious doubt. Evans was clearly struggling, falling two and a half seconds back from Bird and having to defend hard from Cassidy, who in turn had Da Costa and the Porsche cars behind, enjoying an energy advantage

Da Costa was told that Cassidy was over-consuming, as he closed in on him in the final minutes. However, Evans dramatically dropped down to fourth in the final two minutes after hitting his left rear at turn four – the same spot he had compromised his Super Pole lap earlier in the day.

Cassidy and Da Costa passed the stricken Jaguar for the podium-paying positions, leaving Evans to defend from the still-close Porsches. They passed him on the subsequent lap, Evans visibly struggling with a wildly imbalanced car and seemingly broken rear suspension. He eventually crawled across the line, falling down to thirteenth as his car slowly stopped.

Bird took the chequered flag comfortably ahead, putting him at the top of the drivers’ championship. Antonio Felix da Costa’s third place puts him in joint second, with Robin Frijns who managed an eighth place finish, from starting 21st. Yesterday’s race winner, Max Günther, also made an impressive improvement from 23rd to tenth to take the final point.