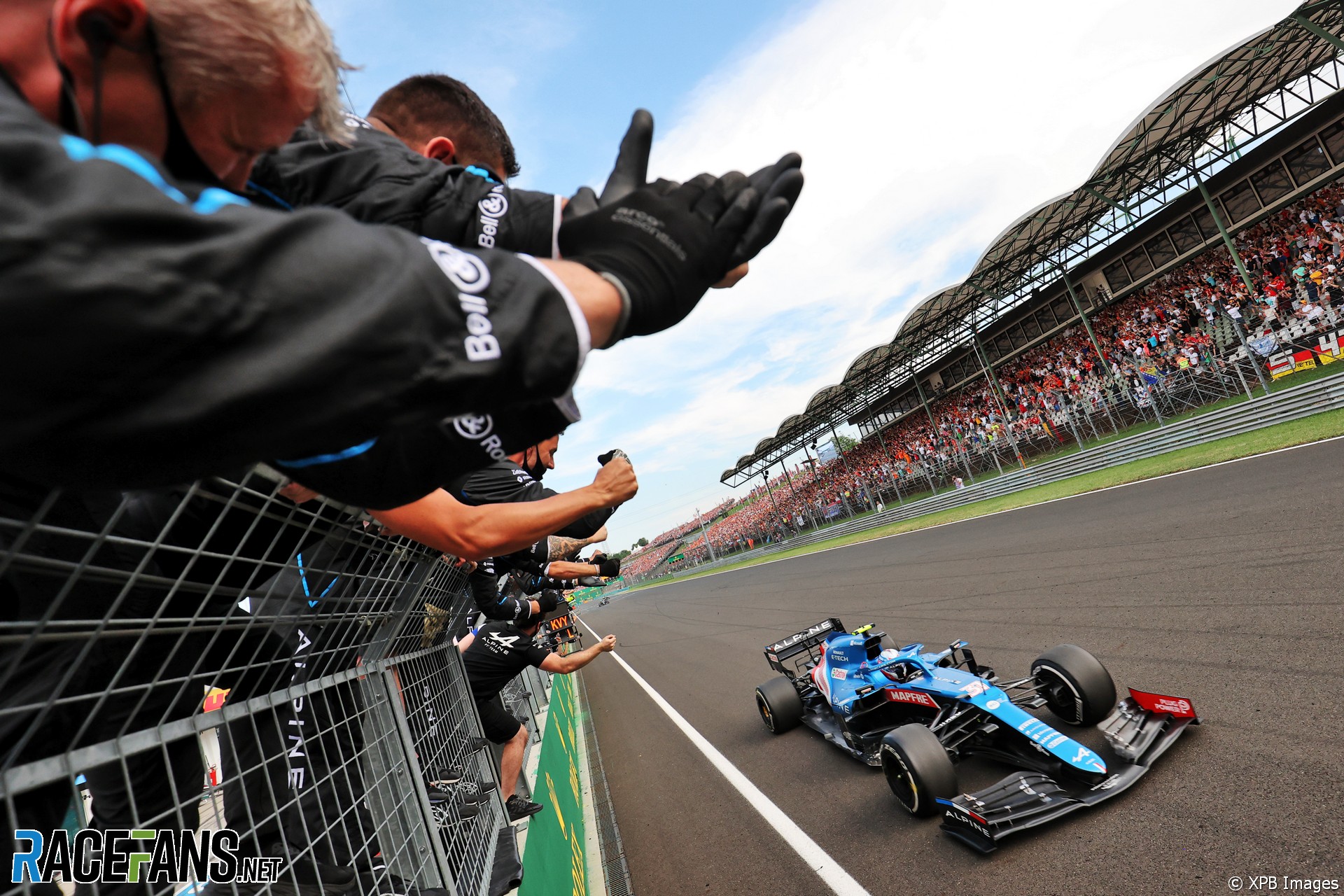 By whatever standard, the Alpine brand enjoyed a highly successful August. On the first of the month its F1 team – formerly known as Renault, and many other names previously – celebrated a first victory for the blue cars courtesy of Esteban Ocon in Hungary.

His team mate Fernando Alonso was elevated to fourth place after the exclusion of runner-up Sebastian Vettel for a fuel system infringement, which was finally confirmed when his Aston Martin team dropped their appeal bid 11 days later.

These results propelled the team from a pre-Budapest seventh in the constructors standings to fifth, having leap-frogged Aston Martin and AlphaTauri. During an exclusive interview in May, Alpine CEO Laurent Rossi stated the team’s target was to at least match its 2020 fifth place classification, so the team was able to head into F1’s summer break with a sense of ‘mission accomplished’ – thus far, at least.

Asked on Friday at Spa-Francorchamps whether the team could now relax slightly, Rossi said, “Let’s not count our chickens before they hatch. It’s earlier than what we expected, but that’s racing; there’s always a couple of races where there’s a bit of a change of circumstances and you have to seize the opportunities.

“But the objective remains finishing in the position we’re in, which is fifth at the very least, but for the moment that’s the most tangible objective and it helps towards keeping that position, obviously, because we were a bit far from it.”

Then, lest there were doubts about Alpine’s commitment to F1, he stated that, “It’s a long-term project; it’s a 100-race project.”

Another podium for the team came at Le Mans, where a ‘grandfathered’ hypercar class Signatech Alpine A480 placed third in the Le Mans 24 Hour classic, at one stage running winner Toyota close – albeit only after both Japanese cars hit fuel system glitches. Whatever, you have to be in it to win it, and Alpine’s entry ran the full duration.

In the run-up to the race Rossi confirmed that Alpine was investigating a full-blown hypercar project – targeting 2023, the century of the French endurance racing classic – adding that a decision was expected soon.

“I have a very keen and positive because endurance racing is a good way to express Alpine’s qualities that are complementary to Formula 1. But we need to look at all the parameters, chiefly the economic and sporting equations: what would it take for us to race in endurance with a chance of winning?

“While it has a big audience, F1 is by no means representative of all the consumers we would like to provide cars to in the future. In that respect, endurance racing is complementary.”

A week later news broke that the team had persuaded Alonso to extend his contract – the two-times world champion is believed to have held an option that expired mid-August – and thus it seemed that for Alpine the good news just kept rolling in.

Yet in the midst of this it emerged Rémi Taffin, a long-standing employee who had worked his way up the team ladder from race engineer to director of operations for the Renault F1 engine division based in the north Parisian suburb of Viry-Châtillon, had left.

“We agreed with Rémi that we’d reached the natural fork in our history,” said Rossi on Friday, “We’re going in a new direction, we’re taking the team in a new direction, so it was only natural to part ways now rather than in the midst of a new adventure.”

Rossi added that Taffin’s departure “doesn’t change what’s in the pipe in terms of the engine [for] next year. The plan was laid out before the beginning of the year and we’re following it.”

All well and good: People come and go after ‘natural forks’ are arrived at. But Rossi, who has been surprisingly open about driver matters, refused point blank to answer questions put to him by RaceFans about Taffin’s replacement or the various structures reporting through him save to state.

“This is internal stuff, there are four directors reporting directly into me,” he said. “I won’t tell you their names, but that’s about it.”

That something was up became evident during the Austrian Grand Prix in early July when a team insider refused to answer questions about the engine division save to say: “It would take me all day to explain it all to you, and I don’t have that amount of time…”

This begs the question: What is going on in Viry? It has long been maintained by those in the know that Renault’s power units underperform due to their composite turbo architecture, the Hungary win notwithstanding. The fact Renault has lost three customers since 2018 – McLaren (to Mercedes) plus Red Bull and AlphaTauri (to Honda) – tells its own tale. Indeed, of the four current suppliers, Renault is the only one supplying a single team – its own.

The looming engine freeze – set for 2022-2025 – means that power units cannot simply be upgraded at will, and thus a competitive engine will be absolutely critical to sustained success for the next four years. At the rate of 22 grands prix per year Alpine’s 100-race plan, embarked upon at the start of this season, expires before the end of 2025.

Taffin’s departure raises the questions who will execute this ‘plan’, and why such secrecy? Which in turn leaves one to wonder: Will Alpine’s good news cycle reach a premature end?