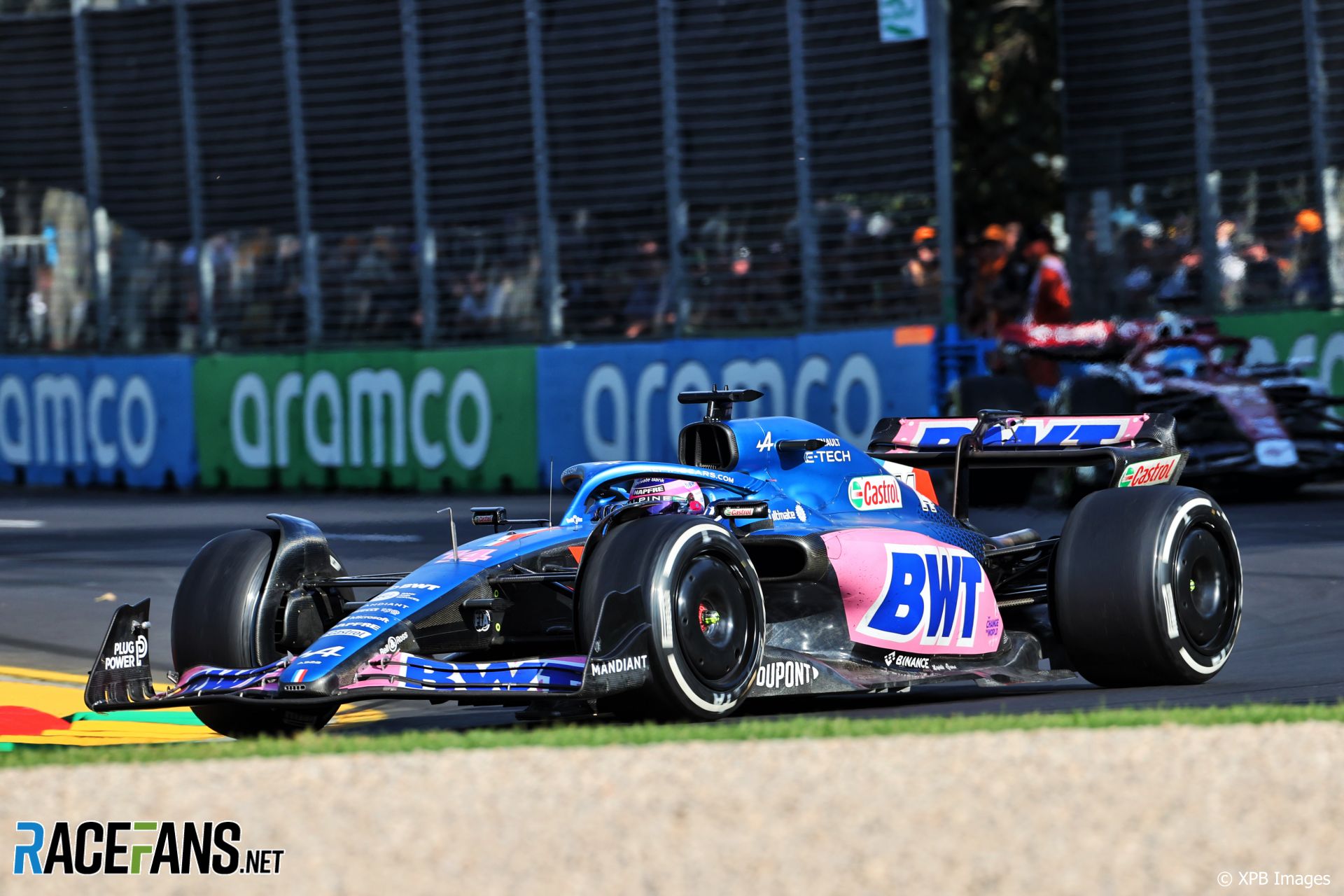 In the round-up: Alpine will run development parts in the single hour of practice before qualifying tomorrow.

Alpine’s chief technical officer Pay Fry says the team needs to bring its race pace up to the same level as its qualifying form.

“Clearly our qualifying performance is relatively competitive since we’ve had both cars regularly in Q3,” said Fry. “Had we got things right in Melbourne, we could have been as high as the second row.

“We need to improve our race pace and we’re investigating what can be done. There’s always the right balance to be found between qualifying pace and race pace and we need to continue to work on this to get comfortable with the car on low and high fuel.”

The team will have an upgrade for its A522 chassis at the fourth race of the season this weekend. “We’re working through bringing weight-saving items to the car when and where we can,” he said.

“Although it’s a sprint race weekend we still have a new floor upgrade that we will test, so we’ll see how that fares in the sole Friday practice session. It’s a step in the right direction and it will be interesting to see how it performs on-track.”

“Last year, I was worried about the sprint qualifying with only having one practice session before qualifying,” Tsunoda admitted. “But this season I feel much more confident, also because Imola is a track I know well as I have driven a lot of laps there. Also, I now know how to approach the sprint weekends and hopefully it will end in points for us.”

“Imola is a real test of driver and machine, and that’s what every F1 circuit should be,” the Aston Martin driver said. “It’s hard to imagine we’d ever be racing around Imola in ground effect cars – that’s really something special, and a bit of a throwback to the 1980s, which is cool.”

Former Le Mans Dodge Viper project leader and owner of IndyCar team Paretta Autosport Beth Paretta and former IndyCar driver Lyn St James have today announced the launch of Women in Motorsport North America. The initiative is intended to act as a resource for any women looking for information, mentoring or advice on entering a career in motorsport in any capacity.

“We are proud to have such a strong, varied working group of professional women and men who have helped shape our purpose and strategy. Our strength is in our members and the breadth of their perspectives across many disciplines including engineers, drivers, team management, PR, marketing, track operations, sponsor relations, and event promotions,” Paretta explained.

“As we strive to increase opportunities for women to work in motorsports, WIMNA will be a resource for people considering or advancing their careers,” she continued. “The organisation will help us all work together to identify, train, and support new talent to continue to produce a pipeline of future experts in our sport.”

🟢🟢🟢 for the installation run and @lundgaardoff’s first time on the @IMS oval.

Eyes forward. @TonyKanaan is back behind the wheel where he belongs.

The 2013 #Indy500 champ will be in the No. 1 #BeTheOne @AmericanLegion livery for the 106th Running of the Indianapolis 500 pres. by @GainbridgeLife.#INDYCAR // @CGRTeams pic.twitter.com/M9VlQf1zaI

"Fine said any potential harm to the residents would be avoidable — perhaps by wearing ear plugs or staying inside — and added that the evidence the residents have presented on noise levels is 'highly speculative.'"

There will be no balloon release at the Indianapolis Motor Speedway during the 106th running of the Indianapolis 500. The move was confirmed to FOX59 by both IMS president Doug Boles and IMS representative Alex Damron.

McLaren planning for a future that includes Pato O’Ward (AP)

Brown offered O’Ward a reworked deal but the driver hasn’t accepted and he also declined to sign an identical contract to the one Colton Herta signed to test McLaren’s F1 cars. O’Ward, who turns 23 next month, wants desperately to move to F1 and wants a significant pay raise that aligns him with the top IndyCar drivers.

The test was recently held on the 1.25-mile World Wide Technology Raceway oval in Madison, Ill., where the Roger Penske-owned series sampled tyres made by its IndyCar series partner Firestone.

Thirty years ago today, the world tragically lost another young Dutch driver, Marcel Albers, who stood on the verge of huge success in the sport. Coming into round three of the 1992 British Formula 3 season at Thruxton, the 24-year-old Alan Docking Racing (ADR) driver was trailing Paul Stewart Racing-run title rival Gil de Ferran by four points, the pair taking a win apiece in the first two races.

Reflecting on one fan’s account of the 1994 San Marino Grand Prix weekend, Ozzmosis points out more marshals have been lost to fatal than F1 drivers in the years since.

Often overlooked is the death of a number of F1 marshals in modern times. The 2000 Italian, 2001 Australian and 2013 Canadian grands prix all overshadowed by marshal fatalities.

The article echoes my memory of attending my first grand prix in Melbourne in 1996 – sort of. I was too young to buy a ticket but travelled to the Albert Park circuit by train on race day, riding my mountain bike around the circuit perimeter during the race. I was able to catch a glimpse of the cars from the run-off at the northern end of Lakeside Drive. The sound was incredible, and the speed hard to believe. Though compared to modern F1 cars, the 1996 cars were slow!

I had no idea who won the race until I got home.
Ozzmosis