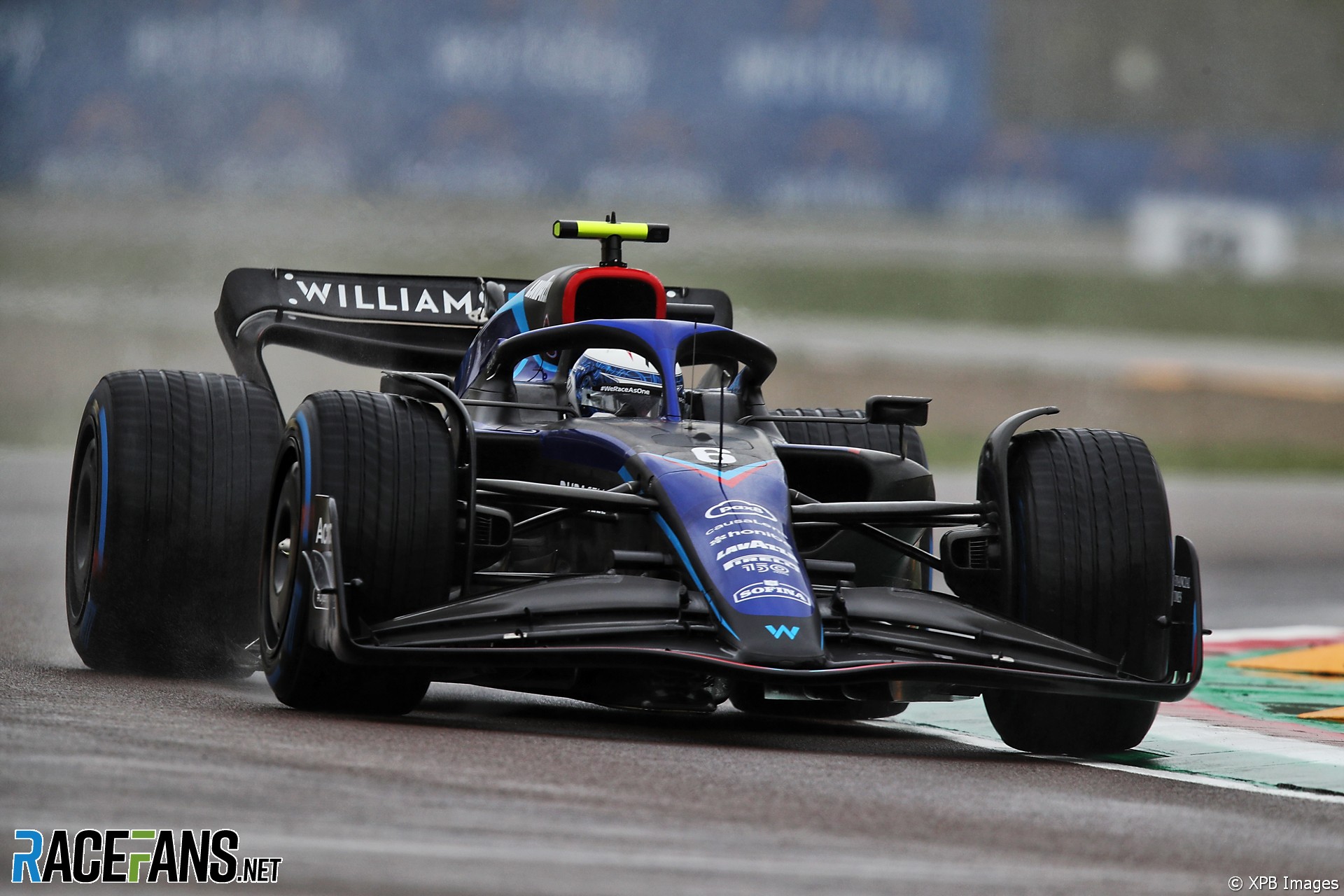 In the round-up: Nicholas Latifi says he knows he needs to get on the same level as team mate Alex Albon

‘I have to get on Albon’s level’, accepts Latifi

Nicholas Latifi says he knows he needs to get on the same level of performance as Williams team mate Alex Albon.

Latifi currently sits bottom of the drivers’ championship, one of only two drivers yet to score their first point of the season. He admits he is struggling with a lack of confidence in car – even on the straights.

“It’s everywhere,” Latifi said. “As soon as you’re not flat out through the straights, that’s when it starts.

“Obviously Alex is clearly more comfortable with the car. I mean, regardless of the pace of the car, we know we’re missing downforce. We know we’re struggling with balance issues – this is clear. But he’s doing a better job in managing it, so I have to get to that level.

“For me, it is just a pure feel and confidence thing with the car. It’s not a driving style – [that] I’m braking too late, not carrying enough mid speed, this and that. If you don’t feel the confidence in the car, you can’t begin to work on the more technical aspects when you eventually, will have to work on those things.”

Pascal Wehrlein had been leading the race until he suddenly lost power to the car, with his team unable to radio to their driver. After a Safety Car, Andre Lotterer’s race ended in the Sainte Devote barriers following contact with Oliver Rowland.

“This is a bitter day for the team,” said Modlinger. “After a very good first half, Pascal was leading the field only to have a technical defect throw him out of contention. We now have to analyse what happened.

“The drivers and the team put in a strong qualifying performance and a promising start to the race, but unfortunately weren’t rewarded in the end.”

“I think it’s going to be awesome,” said Rossi. “I’m just excited for Formula 1 and America, honestly. It’s been a long time coming to have multiple races in the States. It’s a big country. There’s no reason not to have three.

Herta said that it was “really good” to see Formula 1 growing in the USA, while Ilott thinks the event will draw a large crowd despite the high ticket prices.

“With the amount of people that turned up to COTA last year, I think Miami will be quite a spectacle and a half, even aside from the on-track stuff,” said Ilott. “I have no idea where the track goes. The rest of it should be a great venue for a lot of people. Just expensive.”

We hope you enjoyed the race 😉

Why am I just now learning about f1 🤦🏾‍♂️

"I've been in dark places quite a few times and it doesn't last a day or a week, it can go on for months. But that will make you so much stronger because there was so much introspection, so much analysis about your life. This sensitivity that is being given to you, that felt like a burden, can actually be a superpower."

"Lawrence Barretto in conversation with John Elkann, chairman of Ferrari."

"A Hard Rock Stadium spokesperson said an electrical incident, not an explosion, had occurred when work was being done for the race events from May 6 to 8. The workers did not suffer life-threatening injures, the spokesperson said."

"Hamilton is probably the best and biggest British motorsport athlete of all-time. To have my name up there in the future would be amazing."

"Our team has been good going into new tracks, getting on top of what we need to do and how to optimize the car. It’s going to be a good opportunity for us hopefully. At the same time, we have to be realistic. We’re not in the position we want to be. But it doesn’t take away from the excitement of arriving in Miami to experience a brand-new event."

"The family of famous Formula One racing driver Daniel Ricciardo have been hit with a hefty damage bill after a fire ripped through their Malaga factory. Ricciardo Earthmoving, owned by the Italian-Australian driver’s dad, Joe Ricciardo, went up in flames on Thursday."

"Alpine F1 Team are looking for a Junior Graphic Designer to work in our small but superb team of in-house designers. You will be expected to create content across multiple touchpoints, for use with the Race Team, the Commercial team and the wider Alpine F1 Team environment."

After this week’s poll asked whether F1 should adopt IndyCar’s approach to red flags in qualifying, a typically insightful contribution from @gt-racer…

This is actually something F1 has looked at adopting in the past but which they ultimately feel there is no real need for as the belief is they have enough data & analysis tools available to them now (As well as what teams are able to do to compile & present additional data) that it’s easy to see when something is done intentionally and when it was a simple mistake.

Indycar feel the need to have the lap time deletion as they don’t have access to the same amount of data or have the same sort of analysis tools available to them (Or the teams) so it’s much more difficult to judge if certain things were intentional or not.

It’s something they have had since the 90’s in different forms & something that was introduced at a time when they didn’t always have TV coverage of qualifying, Didn’t have much data from the cars and where only a few cars carried onboard cameras. Back then judging incidents in qualifying was next to impossible so this came about as a deterrent. As coverage of qualifying & data available has got to where it is now, It’s probably something they wouldn’t introduce if it wasn’t already a thing as it’s less needed than it once was.
@gt-racer

20 comments on “‘I have to get on Albon’s level’, accepts Latifi”