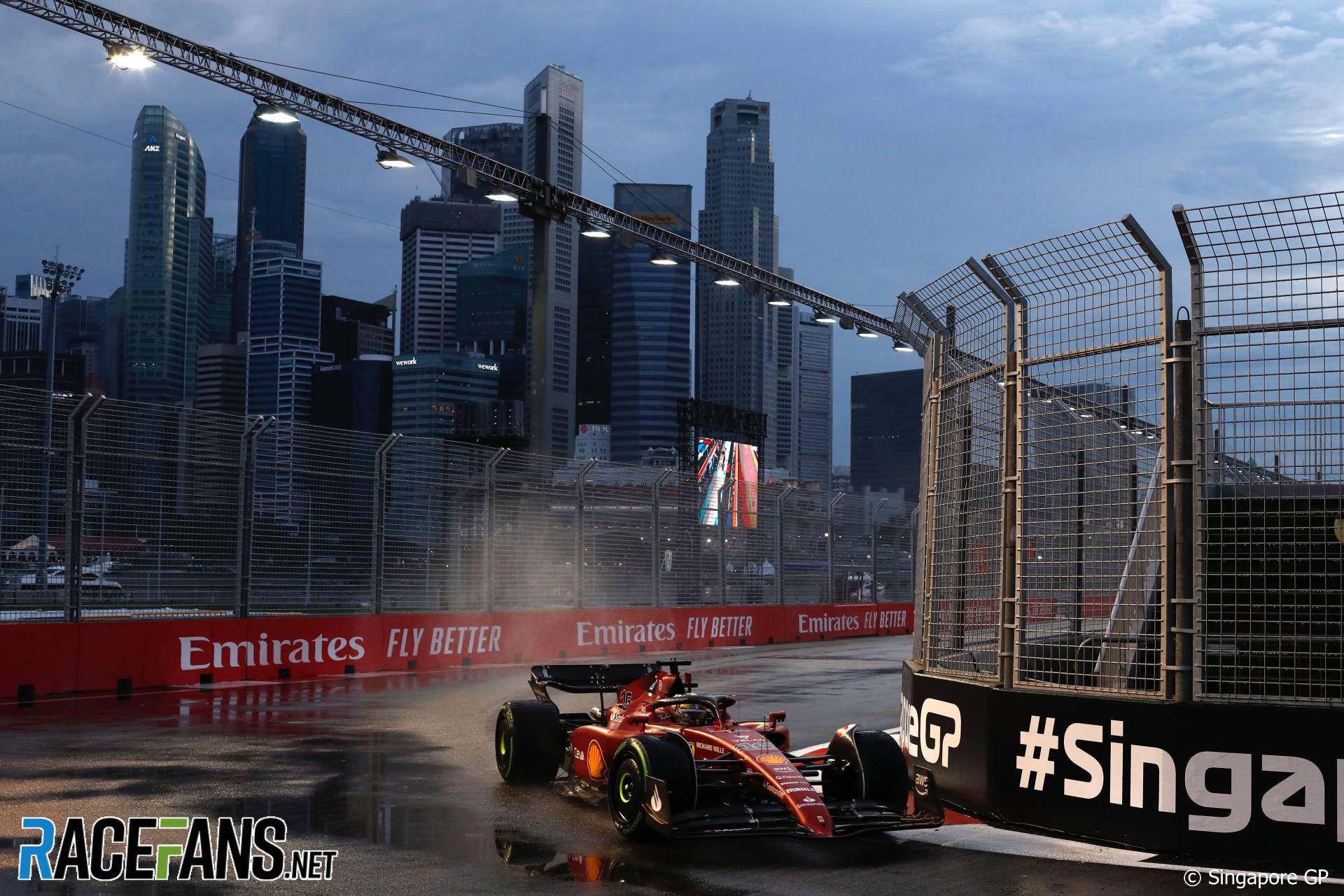 Ferrari’s Charles Leclerc was quickest in a wet final practice session that featured only half an hour of track running.

Leclerc’s best time of a 1’57.782 on intermediate tyres on a drying track was just over half a second quicker than Max Verstappen, with Carlos Sainz Jnr third fastest in the second Ferrari.

With the circuit still extremely wet, race director Eduardo Freitas chose to begin the session but keep the pit entry closed, preventing any drivers from taking to the track. This allowed the session to finish without a delay which would have forced the start of qualifying to be pushed back.

It was a long wait as the rain ceased and the marshals around the Marina Bay course brushed away as much standing water as they could. After almost half the session had elapsed, Freitas confirmed the pit lane would be opened at the half-hour mark.

The green light at the end of the pit lane signalled that the track was open, but none of the 10 teams were keen to send their cars out onto the still wet track. Eventually AlphaTauri opted to send out Pierre Gasly, who was soon followed by team mate Yuki Tsunoda and Valtteri Bottas in the Alfa Romeo.

Lando Norris set the early benchmark time on the wet tyres with a 2’09.642, but was soon called in by his team to switch to intermediate tyres. Max Verstappen chose to head out on the intermediates and immediately proved it was the correct tyre for the conditions by posting a 2’06.872.

Williams’s Nicholas Latifi briefly triggered the yellow flags by having to brake to a stop at turn 13 to avoid hitting the barriers, but he was able to reverse out and continue. Mick Schumacher was brought into the pits to change tyres but was told to stop the car immediately after being released from the Haas pit box as mechanics feared his right-rear wheel had not been fastened correctly. The stewards will investigate the incident after the session.

As the track continued to dry, lap times began to drop. Leclerc went fastest, dropping under the two minute mark. In the final minutes, Leclerc lowered his own best time to a 1’57.782, while Verstappen moved into second with a lap just over half a second slower.

The damp track continued to catch drivers out. Gasly took to the escape road at turn 18 after missing his braking point, briefly bringing out the yellow flags. George Russell made a similar error into turn seven and had to make a 180 degree spin turn to escape from the run off.

Leclerc’s best time was not beaten, leaving him quickest as the chequered flag flew and half a second faster than Verstappen in second. Sainz ended the session third, a second behind his team mate, ahead of Fernando Alonso, Sergio Perez and Lance Stroll. Esteban Ocon, Sebastian Vettel, Russell and Daniel Ricciardo completed the top 10.