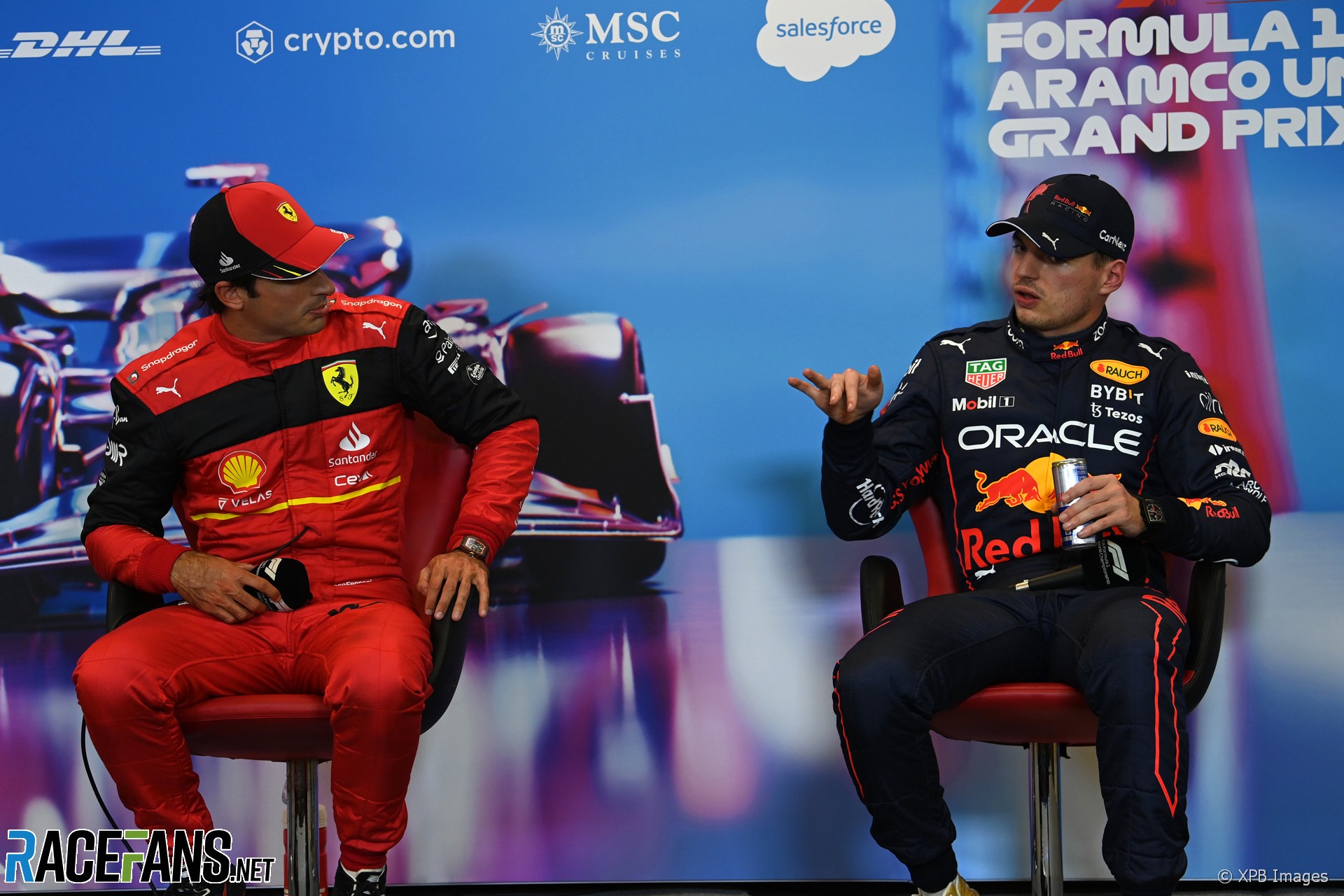 As former team mates who entered Formula 1 in the same team as each other back in 2015, Carlos Sainz Jnr and Max Verstappen’s careers have diverged in two very different paths since their first year-and-a-half together.

Verstappen, now a double world champion, fulfilled the great promise always expected of him within the Red Bull ecosystem. Meanwhile Sainz’s route to the front of the field took him from Faenza to Enstone, from Enstone to Woking and then finally from Woking to Maranello where he would join the fight alongside Verstappen once more, only now dressed in red.

After the paddock was informed the news before qualifying that the founder of the Red Bull energy drink and media empire, Dietrich Mateschitz, had died following a lengthy illness, there was serendipity in how the two currently most prominent products of the Red Bull junior driver programme, Sainz and Verstappen, would be the ones to line up on the front row of the grid.

For the first time, Sainz will start on pole position with Verstappen alongside him. After so many rounds following the summer break where Sainz had come so close to pole only to miss out by fractions of a second, the Ferrari driver was relieved to have finally secured the top spot.

“I kept my head down and kept trusting that one day [it] was going to come,” Sainz said.

“There’s been qualifying this year where I was half a tenth off pole and I had done a fairly big mistake in the last sector or in the second sector that had cost me, so also having a decently clean lap for the wind conditions that were out there contributed.”

Sainz’s third pole of the season is only the second time he has been the fastest driver in qualifying. But just as in Silverstone, where he was helped by a mistake from Charles Leclerc which compromised Verstappen’s final lap, Sainz benefitted from another mistake from his team mate on Saturday. Leclerc was half a tenth quicker heading into the final corner, Andretti, but by the time they reached the timing line to complete the lap, it was Sainz who was half a tenth to the good.

“When you speak about such a small margin, you can always do better,” Leclerc reflected. “But every driver can do better in Q3 when you see the lap afterwards. Carlos did a better job today and he deserves to be on pole.”

Leclerc’s 10-place grid penalty for a sixth engine and a sixth turbo charger demotes him off the front row and down into 12th on the grid, promoting Verstappen up to second. As the newly re-crowned world champion, Verstappen could afford to let Ferrari have this result over him.

“I ran out of tyres a little bit in the last sector with big oversteer in the second-to-last corner,” he explained. “But all in all, we’re still very close to pole.

“Last race, it was the other way around where I was on pole, but it was all fine margins. And now when you don’t get it entirely together, you are P3 but at the same distance between the three cars… I think still it’s a great result.”

With its ‘pick and mix’ track design featuring fast sweepers, 90-degree bends, slow hairpins and long straights, the Circuit of the Americas naturally rewards cars with good all-around performance across many types of corner. Sainz may have beaten Verstappen on Saturday, but he was understandably concerned about the driver lining up alongside him who has taken the chequered flag first 12 times already this season.

“I’m not going to lie, I think for tomorrow Red Bull are still favourites,” Sainz admitted.

“They normally get us in the race. Max does a great job and Red Bull has a very good car in race trim. But we’re going to do everything we can to try and stay ahead tomorrow and win the race, which would be an amazing way to start these last four races.”

As second practice was used for testing 2023 prototype tyres, teams do not have the same quantity of tyre data heading into the race as they typically would in a dry weekend. Sainz says Ferrari are wary of their ability to keep their tyres in good condition compared to their rivals.

“We’ve had quite a lot of degradation, I think across the whole grid,” he said. “We know when there’s a lot of degradation sometimes we struggle a bit more than Red Bull or Mercedes. There’s nothing to not be confident to try and go for the win tomorrow and try and put together a good race, but we are also aware that with the temperatures tomorrow, it could be a tough day out there.”

As the season’s dominant driver, Verstappen has every reason to feel confident in his chances of victory – and he does. “We have a quick race car, so I think we should be strong,” he said.

Once again, Mercedes had to settle for being behind both Ferraris and Red Bulls at the end of the session. But Lewis Hamilton and George Russell will line up third and fourth due to penalties for Leclerc and Sergio Perez. As the team seeks its first win of the season, team principal Toto Wolff says that Mercedes will head into the race with an attacking mentality.

“Clearly the favourites are starting in front of us, but we’re six-tenths off pole position,” Wolff said. “Could have been a little bit less than that and that is a good indication.

“With two cars, strategy-wise, maybe we have a few more options. Definitely we need to have the mindset of saying we will race for the victory. Even though, if I was a bookie, Verstappen and Sainz will probably have better odds.”

While the teams have so far favoured the soft tyres across the weekend, Pirelli expect that they will be avoiding the red-walled compound entirely during the race. The tyre supplier predict a two-stop strategy to be best for the 56-lap event, starting on the mediums before running two stints on the hards. As an alternative, teams could try to stretch the middle stint on hard tyres to run softs for the first and final stint, but will require a large degree of tyre saving.

As has been seen many times before at COTA, two long DRS zones across the pit straight and the back straight means there will be plenty of opportunities for passes to be made on track as opposed to through the pit stop cycle. Verstappen knows if he fails to beat the Ferrari off the line, all he needs to do is keep in touch of his former Toro Rosso team mate.

“We just have to be there. I know we have a quick race car, so if we have a clean first lap I know that we can have a very good race.”

Are we about to see Verstappen take a record-equalling 13th grand prix in a season? What do you expected Leclerc and Perez to achieve from their compromised starting positions?