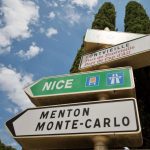 Group for fans going to the Monaco Grand Prix at Monte-Carlo.

Photos and thoughts from Monaco 2017