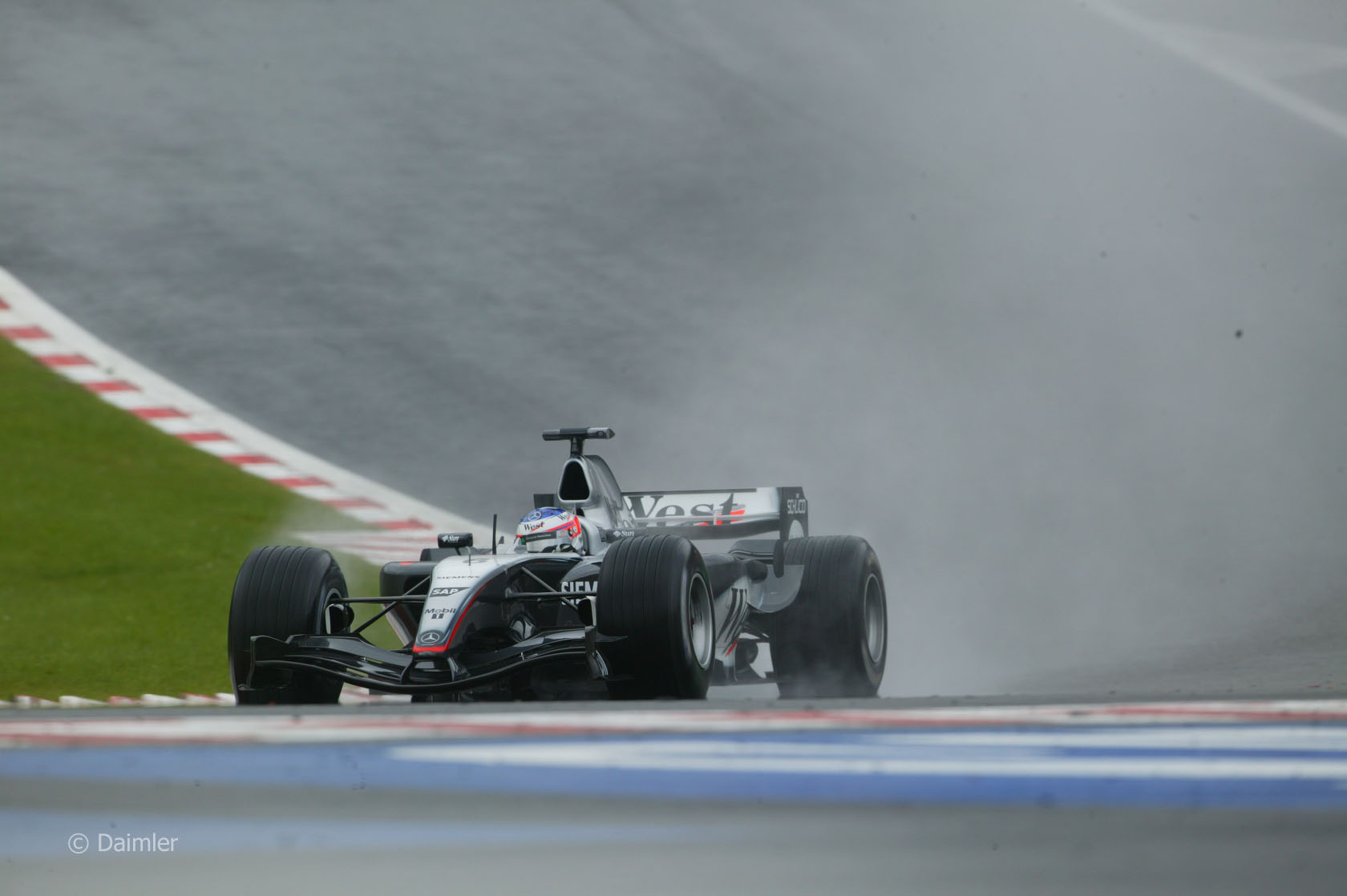 Not since 1999 has anyone beaten Michael Schumacher to the driver’s championship – and on that occasion he missed half the season with a broken leg.

Whatever his detractors say, his achievement of five successive championship victories eclipses even Juan Manuel Fangio’s record of four in the fifties.

All but the most blinkered Schumacher fan must concede that his domination of the sport is wearing a little thin. Perhaps, with the element of unpredictability afforded by the revisions to the rules for 2005 and the stronger resolve from his opponents after the humiliation of 2004, they may finally halt Schumacher’s winning streak. After all, the suffocatingly dull 2002 season was followed by a much closer fight in 2003.

Simple-minded optimism? Let’s see. There are at least seven drivers who can take the fight to Schumacher in 2005:

Hyped up to the eyeballs since his 2001 debut for Sauber, before being snapped up by McLaren to replace a similarly monotone but wickedly fast Finn, Mika Hallinen. His detractors will argue that the results don’t stack up against the hype, but in his defence he has suffered a lot of mechanical failures at McLaren.

He put a convincing, stealthy, Alain Prost-like title campaign together in 2003 but was ultimately restrained by unnecessary and unforced errors, especially in qualifying. After a frustrating 2004 it is now time for him to prove that he has moved to a new level of driving maturity where he can marry total consistency to his massive speed. His racecraft has certainly improved in the past two season from his somewhat timid earlier performances.

McLaren certainly look to have given him the the best possible chance. The svelte MP4-20 more than looks the part and has been both quick and reliable in testing. Perhaps Raikkonen’s greatest weakness is that the ultra-combative Juan Pablo Montoya will have exactly the same tool at his disposal in 2005. They may well take enough points off each other to hand Schumacher the title if this proves to be a close season.

To his supporters, Montoya is a gladiatorial combatant whose determination to overtake guarantees first-class racing action whenever he locks horns with a major opponent. To his detractors (particularly Ross Brawn and other big Schumacher fans) he is reckless and lacks application.

One major criticism of Montoya is that he often lacks the ability to fully hone a car’s setup over the course of a weekend. Outside of the car, he cuts a less trim physique than many of his rivals. But McLaren may prove a far better home to refine these rough edges than Williams was.

Though he would never say it to the press, Schumacher surely fears Montoya most in wheel-to-wheel combat. The two have had enough confrontations in the past for Montoya to know – as Raikkonen and Alonso are only just realising – that Schumacher will always leave his defensive moves until it is desperately, perhaps dangerously late.

F1 journalists have become increasingly hesitant about writing off Montoya’s chances against Raikkonen – but if either of them is to stand any chance of being champion this year they must focus their energies first on beating Schumacher. You can’t imagine Montoya having a problem with that.

Like Raikkonen and Montoya, Alonso was a 2001-vintage rookie. After taking his first win at Hungary in 2003, the F1 community expected Alonso to destroy Jarno Trulli in 2004 and even pull together a championship campaign. But it was Trulli who took Renault’s only win in 2004, and Alonso who seemed to be struggling more. Indeed, when Renault boss Flavio Briatore gave Trulli the boot you suspected it was partly out of sour grapes that Alonso hadn’t put clear air between the two of them.

Alonso is a master of hammering away at an astonishingly consistent and rapid pace during races, but his qualifying performances have let him down. Nonetheless he is rightly tipped as a potential world champion, though you wonder if he has quite enough experience of race leading, and truly sufficient race craft, to form a championship bid.

For the first time since 1997, Giancarlo Fisichella goes into a season with a half-decent car under him. Briatore poached him from Jordan in 1998 to sit him in a series of increasingly unimpressive Benettons, before sending him back to Jordan just as their glory days had passed. Now, finally, Fisichella is getting the break that many people believe is years overdue.

Fisichella v Alonso is therefore the second most crucial intra-team battle in the pit lane. Alonso may be firmly rooted in Renault but Fisichella has returned to many of the same team members that knew and liked him in 2001. Surely after years of languishing in inferior machinery and squeezing impressive results from half-decent cars, Fisichella will be the first to capitalise on race-winning potential in the R25? We shall see. But unless one of the Renault drivers consistently out-performs the other, they may compromise each other’s points-scoring too much to lead the championship race.

2004 was a massive year for Button, taking his best-of-the-rest BAR to third in the title race. But, while we profile the internal threats to BAR’s 2005 season elsewhere, there are those who suggest that Button could and should have taken his first win in 2004. A win in 2005 is essential, but the 007 does not yet look like the machine to deliver one.

You can’t take much away from Button as a driver. Take a close look whenever we’re treated to some on-board shots of him in 2005: his refined, ultra-smooth driving is the polar opposite to that of someone like Montoya. Button should be the first driver to profit from the 2005 tyre regulations that reward drivers who can make their tyres last. In 2004 we also finally saw glimpses of a hardened, race-savvy approach from Button with his battling run to second in Germany. Button deserves a win soon, but don’t expect the BAR package to be up to a title push just yet.

We take a detailed look at Williams’ problems later on, but in Webber they have a rapid, if still inexperienced (by F1 standards) driver. Just how good Webber will prove to be at Williams is one of the big question marks for 2005. He has proved capable of pulling stunning qualifying performances out of the bag (Brazil & Hungary 2003, Malaysia 2004) but has never had the machinery to convert them into race successes.

Unless Williams make major, rapid progress with the uninspiring FW27, Webber can’t realistically hope for more than podiums in 2005. But his mature approach to fitness, car preparation and racecraft should ensure he is well placed to take advantage of any mistakes made by those in front of him.

“My biggest threat this year is Rubens – he is my toughest competitor,” said Schumacher, speaking at the launch of the Ferrari F2005.

As the pair heading into their sixth season together, and no-one is buying this kind of stuff any more. On the off-chance that anyone is actually entertaining the possibility that this might be Barrichello’s year, let’s remind ourselves of Schumacher’s tally of 616 points to Barrichello’s 374 over the last five seasons. Not to mention the occasions when Barrichello has been ordered to let his team mate win races.

Barrichello’s best chance of championship success would be a repeat of the circumstances Eddie Irvine found himself in six years ago. But otherwise, no amount of cheery smiling and bland platitudes is going to bring him success at the expense of his team mate.