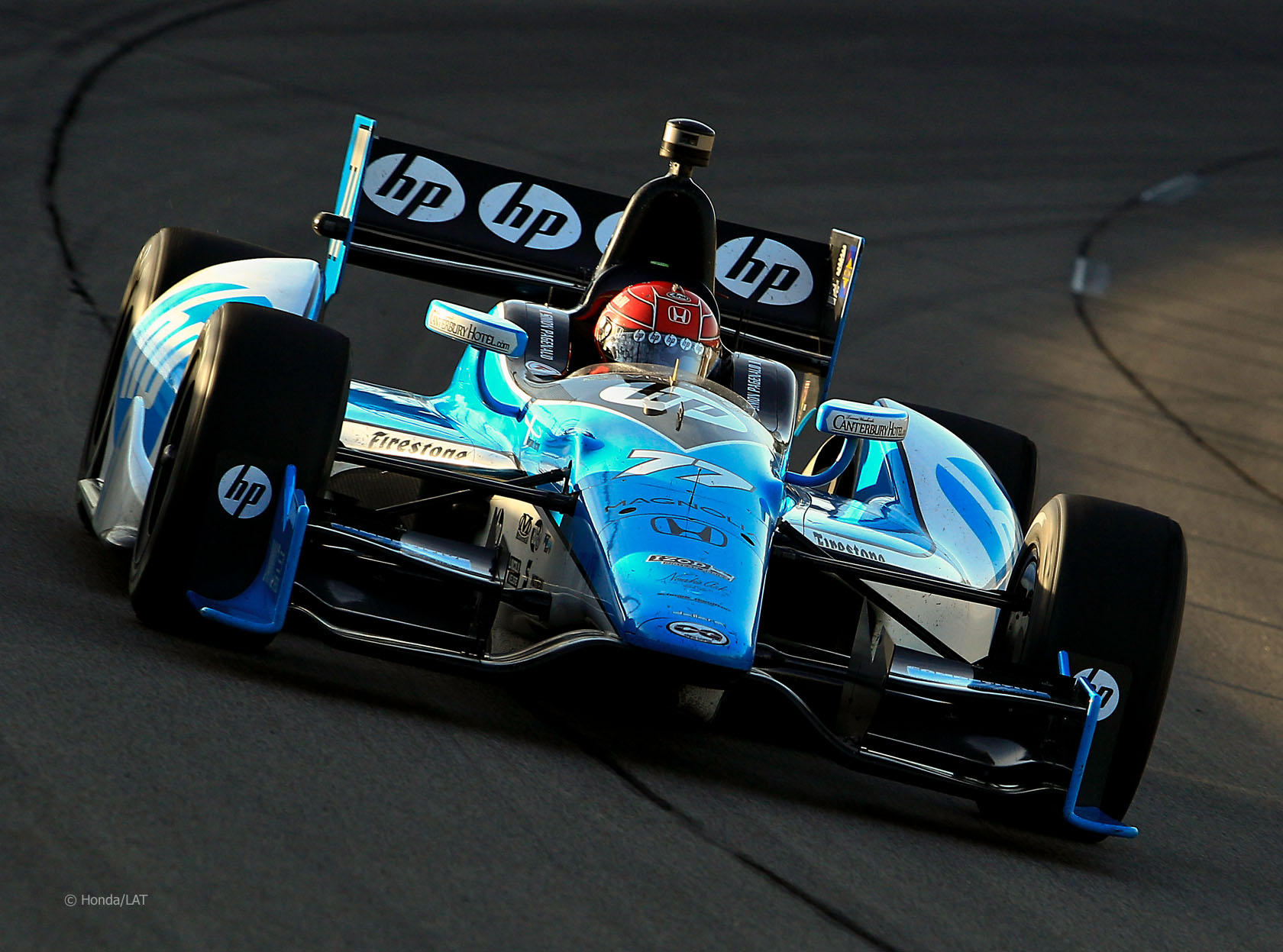 Formula One served up a great season of racing in 2012. But there was a lot more great motor sport action beyond those 20 races.

Here’s my pick of ten of the best races in other categories that F1 Fanatics should have seen.

You’d be forgiven for thinking the combination of seven-year-old ex-A1 Grand Prix chassis and a circuit composed mainly of bumps and chicanes would not make for a terrific race.

But the fifth race of the Auto GP World Series climaxed with a gripping wheel-to-wheel battle between Sergio Campana and Adrian Quiafe-Hobbes.

If this had been F1 DRS would have killed the battle dead immediately. Instead we were treated to Campana soaking up terrific pressure for lap after lap.

Time and again he sat it out with Quaife-Hobbes on the run down the long straights of the Marrakech street circuit and daringly out-braked him to cling to his lead. Although Quaife-Hobbes had to settle for second best, he went on to win the championship.

The Superstars touring car series headed to Mugello in June and the first race was shaped by a pile-up at the first corner. While several drivers were eliminated, Andrea Larini emerged in the lead but his right-rear wheel was trailing sparks.

Ex-F1 driver Johnny Herbert emerged from the pack to chase him down but Larini clung on to take a remarkable victory despite some lurid slides in his wayward handling car.

I could have justified filling my entire top ten with races from this year’s IndyCar championship but I restricted myself to just two.

The championship-deciding finale at the Fontana superspeedway (officially called the Auto Club Speedway) tingled with tension. Title protagonists Will Power and Ryan Hunter-Reay were swapping positions when Power’s Penske snapped out of control and slammed into the wall. Rapid repair work by his team got him back on the track long enough to be able to claim 24th place – meaning Hunter-Reay needed to finish fifth to claim to the title.

After a gruelling race pushing three hours in duration he made it, holding off Power’s team mate Helio Castroneves for fourth to win the championship. No wonder race winner Ed Carpenter was given a video of the race as part of his trophy.

The European F3 Open series may not be the most prestigious of the Formula Three championships but it produced one of the most entertaining races I saw this year at the fabulous Spa-Francorchamps.

Gianmarco Raimondo scored a narrow win over Mans Grenhagen after a frantic slipstreaming contest around the classic Belgian circuit.

It was not a vintage season for GP2, with several top talents switching categories to drive Formula Renault 3.5’s new cars.

Among the breakthrough new talents in the series was James Calado who gave new Sauber driver Esteban Gutierrez a run for his money at Lotus ART.

Calado was robbed of victory in the Valencia feature race by the untimely appearance of the safety car. He looked set to make amends in the sprint race until he was hit by Rio Haryanto. Despite damage he continued to resist his attackers until Luiz Razia produced an incredible move to pass him and Fabio Leimer around the outside and win.

Germany’s premier touring car championship was bolstered by the return of BMW this year. But the racing still too often erred on the dry and strategic side.

That was not always the case, and the series’ iconic Norisring venue produced easily the best race of the season in wet conditions. First championship leader Gary Paffett was knocked into a spin at the first corner and drove a battling recovery to fourth.

But that was nothing compared to the efforts of team mate and Norising specialist Jamie Green. He passed Bruno Spengler for second with two laps to go and then snatched victory from Martin Tomcyk at the very final corner.

Did Norbert Haug enjoy that one? You bet he did!

The Circuit of the Americas is great but I’d still love to see F1 racing at America’s answer to Spa-Francorchamps, Road America (Elkhart Lake).

That’s probably never going to happen, so sports prototypes like these is the best we’re likely to see on the great circuit.

This year’s four-hour race culminated in a brilliant battle for position between Guy Smith and Lucas Luhr, the latter having recovered four laps due to a water leak earlier in the race.

In a conclusion which couldn’t have been scripted better, Luhr fired his car down the inside of Smith’s at the very last turn. But he came off second-best – and there was less than a tenth of a second between them at the line.

The outcome of the GP3 championship swung back and forth during a showdown race at Monza that was so intense there wasn’t time to blink. Mitch Evans held a 14-point lead heading into the race but lined up last on the grid while title rival Daniel Abt started eighth.

Evans made a gutsy attempt to climb through the field but when he went off in the Lesmo corners and Abt took the lead it looked as though the championship was lost.

Then, to Evans’ considerable gratitude, Tio Ellinas took the lead off Abt and claimed the win – sending the championship back to the Arden driver.

Another last-round title-decider, but this one boiled over into a controversial clash between the top two drivers.

Robin Frijns, Jules Bianchi and Sam Bird all went into the final race at the Circuit de Catalunya with a chance of claiming the title. With Frijns holding Bianchi at bay after the mandatory pit stops, it seemed the outcome was settled.

Then, in a blur of excitement, everything changed. Bianchi stunned Frijns, seizing his position at turn one. Now Kevin Magnussen loomed in Frijns’ mirrors and was poised to strike.

Frijns retaliated by diving down the inside of Bianchi. The pair collided and Bianchi was out.

It looked like an optimistic move and Frijns cannot have failed to realise that contact between the pair would guarantee him the title. That’s not to say he deliberately drove into his rival, but you’d have a hard time persuading Bianchi of that.

With Bird only managing seventh, Frijns was guaranteed the title even after the stewards slapped him with a post-race time penalty.

There was an inescapably sombre air as the IndyCar field returned to Indianapolis for the 96th running of one of the greatest races in motor sport. Last year’s winner Dan Wheldon, who tragically lost his life in a crash in Las Vegas in October 2011, was honoured during the event.

Dario Franchitti suffered a setback early in the race when he was knocked into a spin by the incident-prone EJ Viso during a pit stop. He fell to last place, which was a prelude to a performance his friend Wheldon would have been proud of.

Contrary to pre-race predictions the Honda-powered runners such as Franchitti came on strong during the race. Franchitti arrived on the tail of Ganassi team mate Scott Dixon. Behind them was another Honda-powered driver in the running for the lead: ex-F1 pilot Takuma Sato.

With two laps to go Franchitti dived to the inside of Dixon at turn one and Sato followed him, the pair demoting Dixon to third. Beginning the final lap Sato was still in Franchitti’s slipstream and he tried to repeat his pass, drawing alongside Franchitti.

But Sato’s car got away from him and as he headed for the barriers Franchitti somehow avoided being collected. For the second year in a row the Indianpolis 500 was decided by a dramatic last-lap crash.

The race, which saw a record number of lead changes, ended with Franchitti crowned a three-times Indianapolis 500 victor.

Though my significant other may not believe it, I cannot and do not watch every form of four-wheeled motorsport so no doubt there were many more great races during 2012 I didn’t see.

Now it’s time for you to tell me what great races I missed during 2012 in the comments. And, if you saw them, what you thought of these ten.