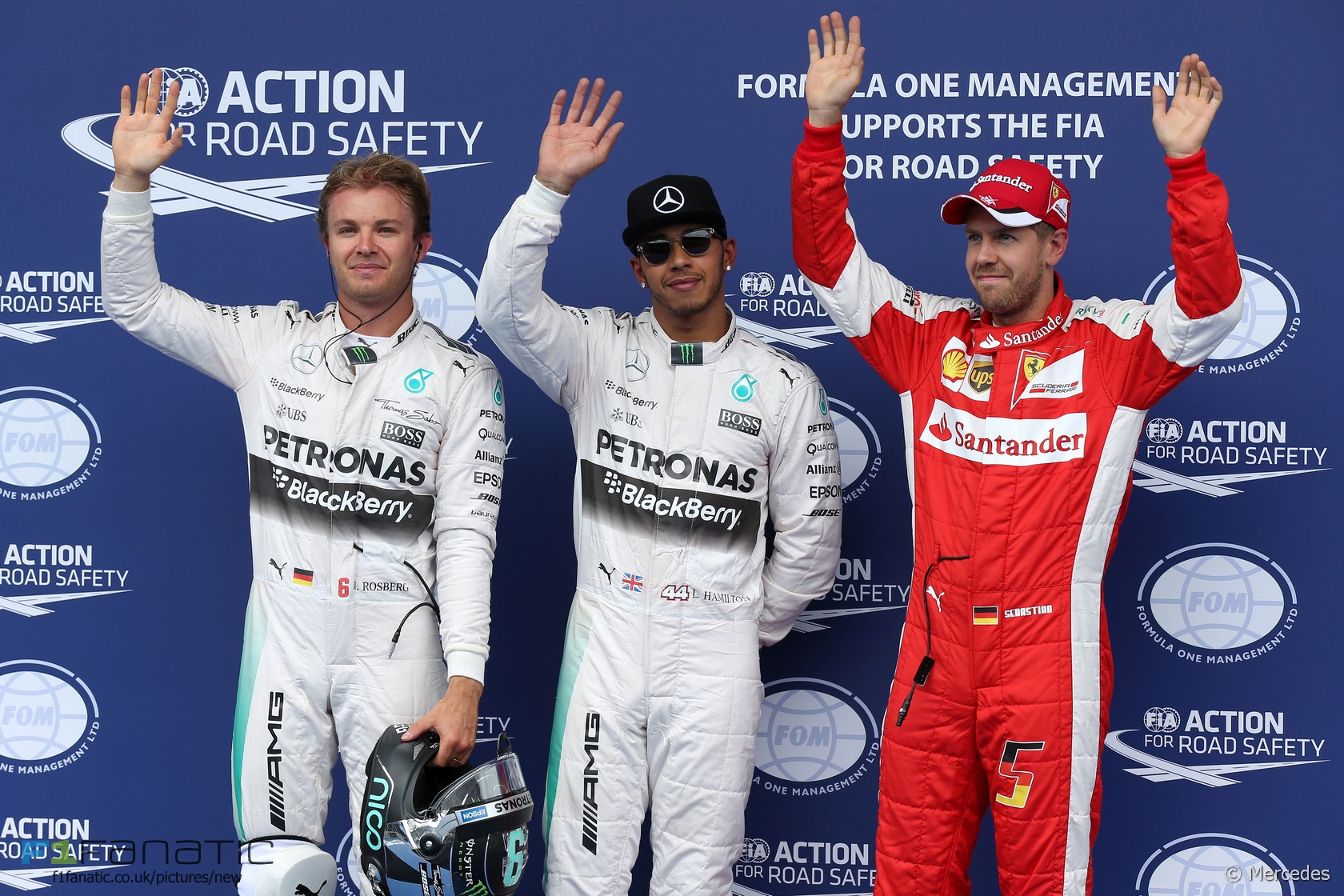 No one other than Mercedes has started a race from pole position in the past 12 months – but the manner in which they achieved their latest front row lock-out was most unusual.

Lewis Hamilton and Nico Rosberg both spun off on their final laps in Q3. But with no one able to beat them they will start the race from first and second, Hamilton on pole position for the seventh time this year.

However Kimi Raikkonen will start near the back of the grid after failing to make it beyond the first part of qualifying.

Qualifying began on a damp but drying track and intermediate tyres were the order of the day for the drivers at first. However it quickly became clear the track would be quick enough for slick tyres by the end of the session.

Williams initially took a punt on sending their drivers out on the soft tyres, but soon joined the rest in opting for the more aggressive super-soft compound. With the track improving with every passing lap, a frenzied battle to escape the clutches of the drop zone began.

Rosberg hovered perilously close to the cut-off point to begin with but escaped the bottom five with time to spare. So did Sebastian Vettel – but not the other Ferrari of Raikkonen. He had fallen to 17th as the final laps began but lost time in the middle sector of the lap and headed for the pits.

He was joined in elimination by Jenson Button, who had led the topsy-turvy session at one stage, and who now faces a penalty during the race as he will be unable to take much of his 25-place penalty.

Fernando Alonso, who faces the same penalty, made it through in his McLaren. However Sergio Perez, who was running behind him on the track, fell at the first hurdle.

With the track now largely dry, Q2 was a more straightforward affair, and ended with the two Mercedes drivers on top. However Rosberg looked by far the more comfortable of the two, and his lap of 1’08.634 was a good four-tenths of a second faster than Hamilton could manage.

The sole remaining Ferrari of Vettel was next, and two places behind him was another driver who reached Q3 after leaving his team mate behind in Q1: Nico Hulkenberg.

Unsurprisingly it was Alonso who propped up the table at the end of Q2. Ahead of him Ricciardo lost out in a close three-way contest for 12th place. He also appeared to caused his team amte some aggravation, but it didn’t prevent Daniil Kvyat from reaching the final ten.

Only one Lotus driver had made it through to Q3 but his involvement didn’t last long. Romain Grosjean reported a problem with his car’s brake-by-wire system, and despite telling his team he felt he could continue he was told to head for the pits.

The super-soft tyres were good for two flying runs at the beginning of the session, and after the first it seemed the status quo between the Mercedes drivers had been preserved – Rosberg was the best part of four-tenths of a second ahead. However on their second efforts Hamilton found the time he had been missing in the twisty middle sector, which moved him two-tenths of a second clear of his team mate.

The scene was set for a climactic battle between the two Mercedes drivers – but it was decided in the most unusual of circumstances. Hamilton’s car got away from him at the very beginning of the lap – he spun off at turn one as he hit the brakes.

That seemed to leave to door open for Rosberg to snatch pole position. But he ran wide in the penultimate corner, then skidded off at the final turn, losing a clear shot at beating his team mate.

Vettel did not quite have the pace to take advantage and had to settle for third place ahead of last year’s pole sitter Felipe Massa. Hulkenberg took fifth ahead of Bottas as the top six featured five Mercedes-powered cars.