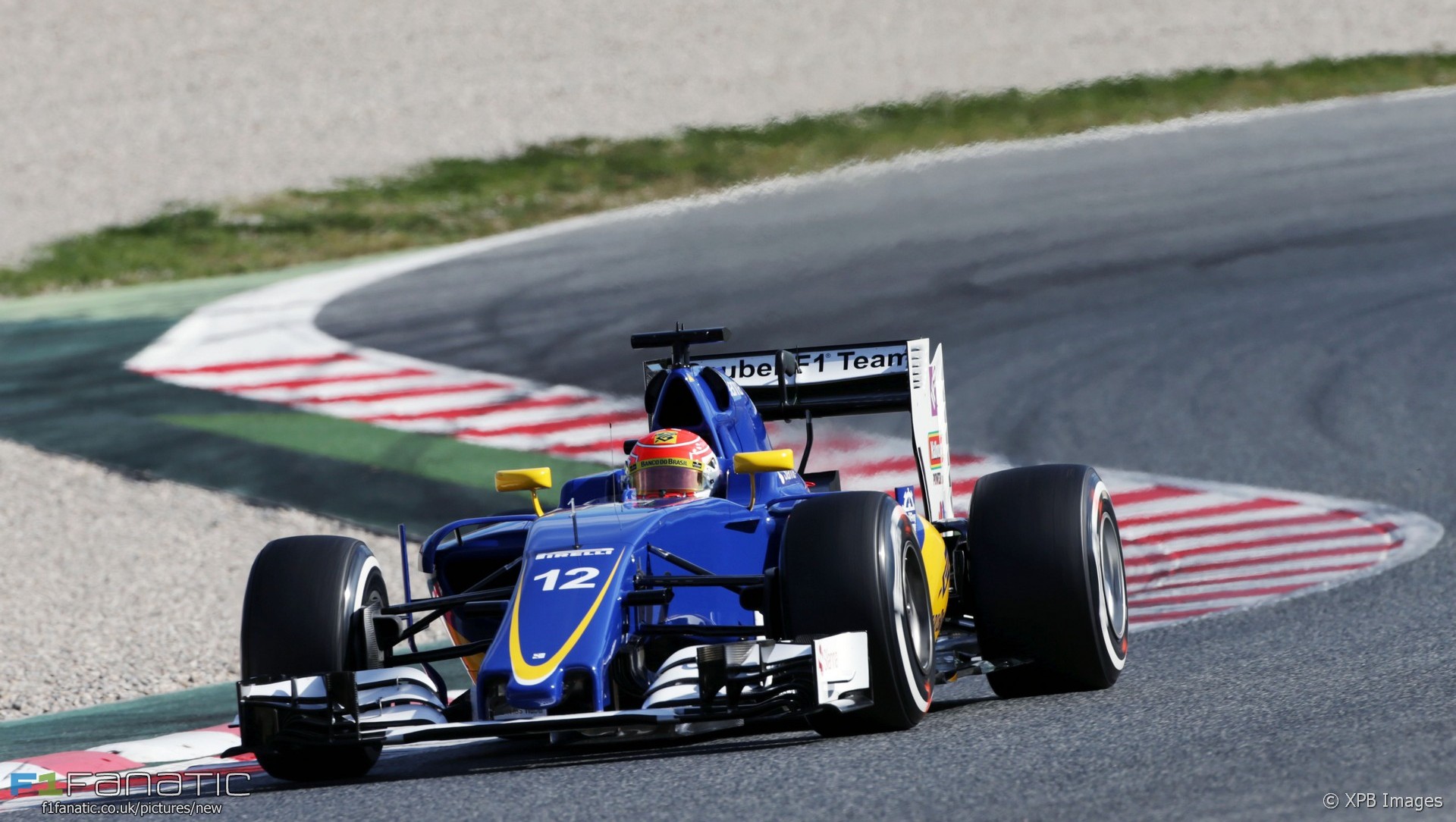 Having started the 2015 season strongly with a double points finish in Australia, Sauber’s form dipped as they ended development of the chassis very early. This and the fact that they ended up being one step behind the latest Ferrari powertrain meant that they slipped to eighth place in the constructors’ championship.

Sauber was the only team not to have its new car ready for the first test. Now the C35 has broken cover it’s clear this wasn’t because a radical change in design philosophy had taken place.
But while the new car is clearly a conservative development of its predecessor it promises to be a beneficial evolution of a car they struggled to fully exploit last year.

The C35 bears the same front wing and nose assembly as of late last year, featuring the shorter nose that was introduced in Singapore. The team has flirted with three wing designs over the past 12 months but it seems they have settled on this the Mercedes-esque approach.

Expect Sauber to refine the positioning of the camera pods on the nose as at the moment they are simply mounted to either side of the structure. They have some catching-up to do in this area.

The front suspension and brake ducts from 2015 have also been retaine, as have the under-chassis turning vanes. Surprisingly the lower wishbone has not been unified like almost all of the other teams have done. This can be changed during the season but it is a hard component to design once racing commences as the chassis cannot be modified.

Changes to the car over last season can be clearly seen when inspecting the bodywork. Gone are the tall, boxy sidepods and in their place much lower lying bodywork that hugs the car more. It is not the most aggressive design but it is an improvement and the rear aerodynamics should benefit from the cleaner airflow passing over the surfaces of the car.

The shoulders of the sidepods have been rounded off and follow what Ferrari are doing with their car. Considering they use the same power unit their cooling demands must be very similar (although there will be packaging differences for items such as the MGU-K/MGU-H and ERS/gearbox radiators), although the Sauber’s inlet apertures are much larger.

During the first two days of testing this week the car’s inlets have been substantially (but not completely) blanked off with tape, indicating there could be further developments in this area very soon. Perhaps the team just want to get some crucial miles down before experimenting with new parts later in the week ahead of Melbourne.

Attention has been paid to the additional aero devices around the cockpit region. The vertical vanes flanking the car are now separate items to the horizontal vanes that loop over the bodywork. These devices are accompanied by an extra vane that branches from the floor next to the bargeboard. These are all designed to guide airflow towards the rear of the car as smoothly as possible. Managing the wake of the front tyre is crucial as it causes drag and disrupts the performance of the floor. This is one of the most developed parts on their car over 2015, indicating the team is confident in the progress it is making here.

The wing mirror stalks (now painted yellow) have an eye-catching leant back design, beneath which lies a small strake to guide flow over the top of the sidepod.

Like last year, the airbox is triangular in form and extremely small – eschewing the trend towards larger boxes seen on other cars like the Mercedes W07. This is flanked by two ‘ear’ inlets that provide air for the gearbox oil cooler that is sat above the gearbox towards the rear end. The roll hoop and engine cover appear little changed from last year.

Sauber has gone to a great deal of effort in refining a the rear end for 2016, including their novel rear wing mounting pylons.

In 2015 only Sauber retained the double pylon arrangement to hold the rear wing in place as the others converged to a single set-up. On the C35 it is now a hybrid of the two, with two structures meeting at the rear wing’s leading edge before forming into one element just above the engine cover.

This has most likely been done to place the wastegate exhaust pipes closer to the centreline of the car as a dual pylon layout would have displaced the pipes further outward. It is not the most elegant solution but it will be lighter than several of the other teams’ designs. Sauber is also using the almost ubiquitous ‘inverted Mickey Mouse’ exhaust layout.

The rear wing has seen some subtle refinements. The upper flap stoops downward at the centre with the main plane’s trailing edge following its path. This reduces the effect of DRS when activated but, providing the airflow stays attached to the wing, it should improve rear downforce slightly.

No doubt there are more additions planned for the C35 which is earlier in its development life than the other cars. The pace at which Sauber is able to keep developing its car, and its out-of-the-box reliability, will be key to whether they can sustain their upward momentum this year.