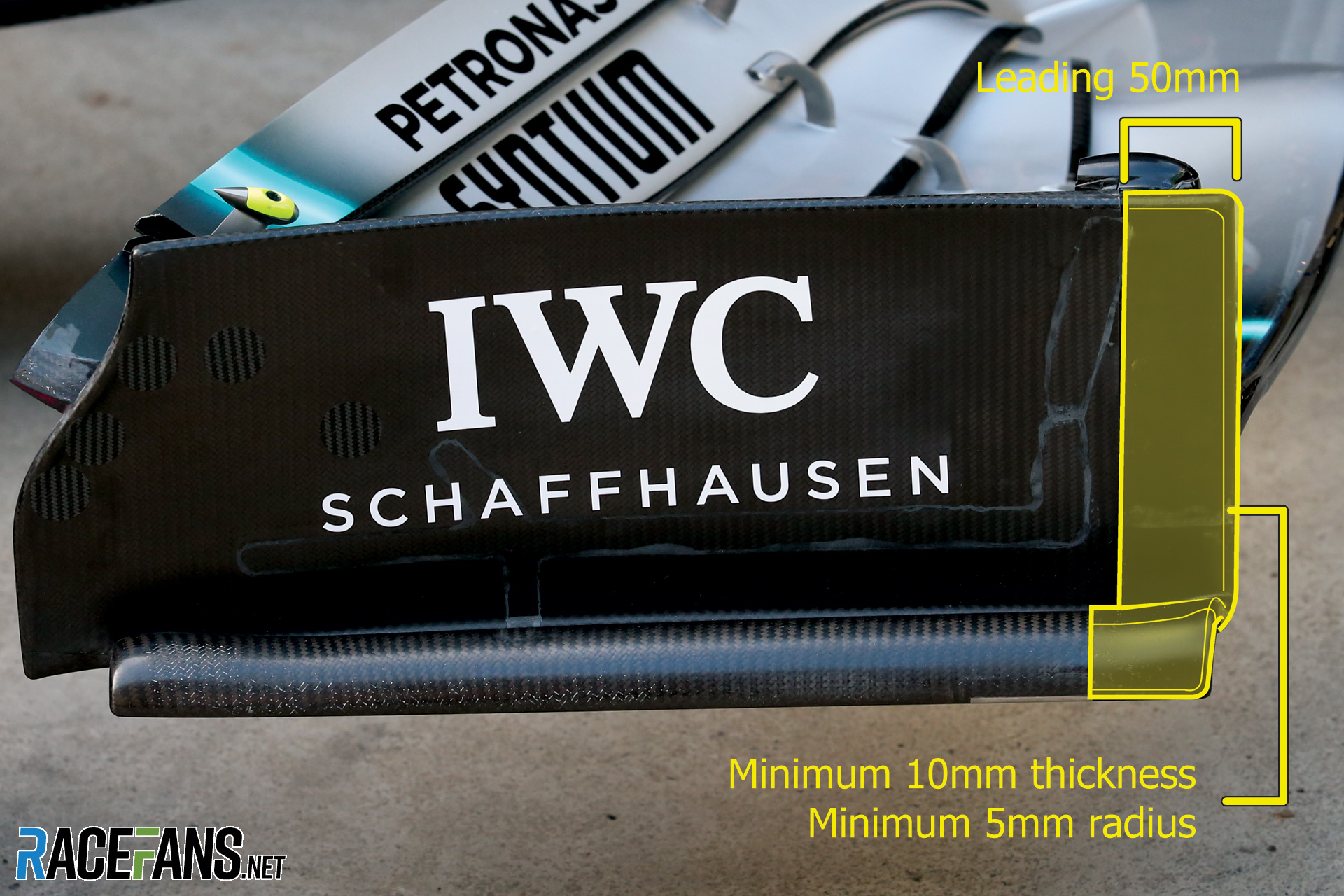 With the new aerodynamic rules introduced for the 2019 F1 season it was only a matter of time before the top teams started exploring the limits of what’s legal.

Sure enough, a rules clarification ahead of the Chinese Grand Prix has prompted Red Bull and Mercedes have been asked to modify aspects of their front wing designs.

But while both teams brought new wing specifications to Shanghai it’s not the new regulations that are causing the problem, but rather a much older rule. At the FIA’s request both teams changed the front edges of their endplates to prevent puncturing other cars’ tyres. (RaceFans understands reports that the dispute centred on the teams’ front wing endplate cut-out designs are wide of the mark.)

F1 rules have long demanded a rounded leading edge to front wing endplates. This is to prevent sharp surfaces which might cut another car’s tyre. Thus, a rule of a minimum 10mm thickness and a 5mm radius applied to the front edge of the endplate has been enforced. Additionally, the front 50mm of the endplate must be made of a specific carbon fibre construction, so that is it is easier to deform against the tyre and not cut it.

On the Mercedes this change in carbon composite construction is visible as the change in colour, from shiny black carbon at the front to the lighter woven texture of the rest of the endplate. While this long-standing rule hasn’t put a complete stop to wing-to-tyre punctures, it has certainly helped.

The FIA are also introducing further, detail changes to this area for 2020, with any metal inserts or add-ons banned from the front of the endplate. These proposed changes probably spurred on the closer examination of the grid’s current wings.

Post-Melbourne this year, after assessing team’s front wing designs, Nikolas Tombazis of the FIA issued a technical directive clarifying his interpretation of the rule in respect to several team’s designs.

Thus, Red Bull and Mercedes are known to have been asked to make changes to their front wing endplates. Subsequently changing these designs will not cost the teams any detectable performance from the change, as despite this being a highly sensitive aerodynamic area, the changes requested will be small.

However, this weekend in China if the teams are not permitted to run their new wing designs for qualifying and the race, then there will be some lap time deficit even if quite small, as the new wings will have been tailored to the demands of the Shanghai track.