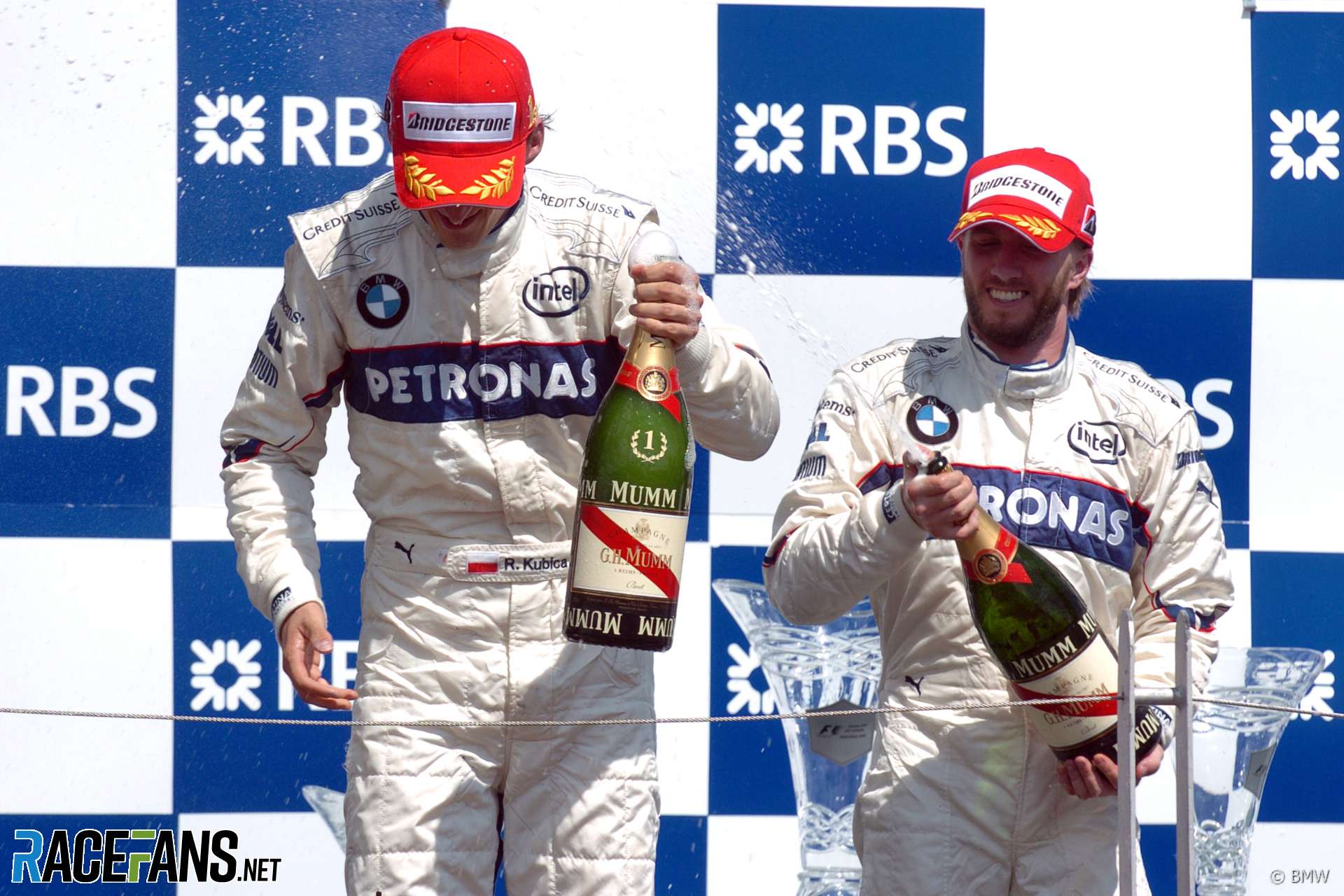 Robert Kubica says a story circulated by Alfa Romeo about his sole Formula 1 win in the Canadian Grand Prix 11 years ago is not true.

The team was known as BMW Sauber when Kubica scored his and their only win to date at the Circuit Gilles Villeneuve in 2008. Ahead of this weekend’s race Alfa Romeo issued a press release regarding the bottle of champagne Kubica received on the podium.

According to Alfa Romeo, the bottle was not opened, and while for years their staff have been told the bottle remains at Hinwil, it was in fact taken by then-owners BMW to their Munich museum.

However Kubica pointed out the story is “not true” because he opened his bottle on the podium. “Probably who invented the story was not here in 2008,” he said when asked about it yesterday.

“I got asked by our media people to comment it because they want to do a press release. I Googled a picture or video from the podium and screenshot it and sent it back. So probably now the story is a bit different.

“It’s funny but it’s difficult for me to comment on something that had a completely different outcome. I’m happy to be positive and I’m happy for those people because many people which are working in Alfa they have been there when I was here. So I think it has been a positive moment not only for myself but also for those people.

“I really hope one day they will have more open champagne bottles from victory in the factory than only mine and I wish them all the best because in the end I know they have been through different periods with good years but also Sauber has also been in difficult periods in the past and they always recover. It shows how united they are and how strong their group is.

“Then from a marketing point of view, I think they didn’t play it properly. Or the other way, they played it properly because we are talking about it…”

Flashback. Canada 2008. Robert Kubica and BMW Sauber have just won their first ever Grand Prix in the baking heat of Montreal. It’s a one-two with Nick Heidfeld following Robert home.

The team crowd under the podium as the Polish anthem rings in the air. Some are shedding tears. Up there, Robert punches the air. He’s got his trophy. He smiles. There’s only one thing left to do – the champagne. Emotion is a funny thing, though. In the excitement of the moment of his first win, Robert forgets to uncork his bottle. No spray from him – and that’s why his winner’s bottle remains, to this day, the only one of our 27 podium bottle with the cork still on, proudly displayed in our team base in Hinwil.

It’s a great Sauber story, one that shows the human side of Formula One. It’s a story new starters are told on their first days in the factory.

A Canada 2008 winner’s bottle, that is true, is still corked. And it’s in Hinwil. But here is actually an even more fascinating story about that bottle – one that involves politics, passions and jealousies. In the aftermath of that win, a benign row, but a row nonetheless, emerged over the ownership of those spoils of victory. Sauber and BMW both wanted to keep the memento, the vessel of the sweetest champagne we had ever tasted. We pleaded and begged but alas, on the occasion, it was the German giant that won “The Battle of the Bottle”: the original is proudly displayed in their Munich museum to this day. Formula One produced a replica and that went to Switzerland.

On the day, we chose to relinquish this precious memory to our partners. That’s what we did, with magnanimity and style. To go on building more great memories in the future.