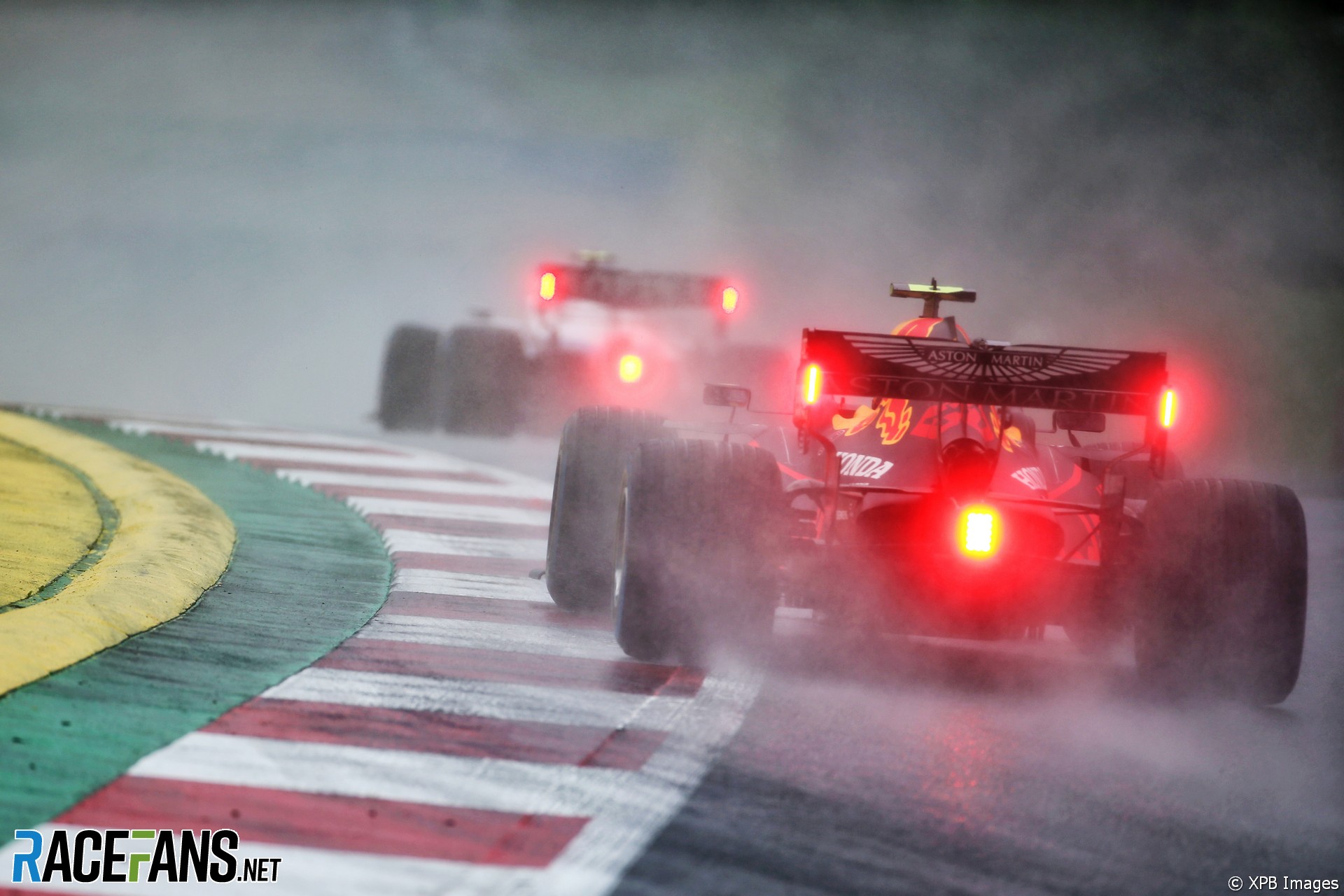 Following fears qualifying would have to be postponed to Sunday because of heavy rain, as has happened in previous seasons, the session went ahead following a 46-minute delay.

Kevin Magnussen was among those who praised F1 for letting the session continue. “I feel like we should be allowed to drive in these extreme conditions,” he said. “It’s not right that we have an extreme wet tyre and we never really get to use it.

“Today we got to use it because the conditions were for extreme wets. So that’s the good balance. It’s not it’s not great if you red-flag the session and then once it goes green, you go straight out on inter. Then you’ve red-flagged for too long.

“Or red-flagged the session while people are on [intermediate tyres]. Give them a chance to go on full wet.

“I think once you can’t go in a straight line because of aquaplaning it’s too much, of course. But then just because there’s a puddle it doesn’t mean that you should red-flag a session. I think we can survive a puddle on the track. But if it’s like a constant patch of the whole straight is like standing water and you’re aquaplaning everywhere, then you have to red-flag it.”

Lewis Hamilton, who took pole position for the session as the track got steadily wetter, said “knowing when to go and when to choose not to let the cars run” is a particularly difficult decision for race control and he is “grateful” they did.

“Just as we came to qualifying obviously it was drying up or or wasn’t raining for a while. And just everyone got in the cars, it started raining again. So we obviously had that bit of a pause.

“But once we got going, it was fine for the first session. It did get worse but I’m glad that they they allowed us to stay out. It was definitely on the limit but that’s that’s racing.

“I’m glad they didn’t take that away from us because today, it’s so special being out there, it’s so difficult. I don’t know how it comes across on the on the cameras, but it is the hardest conditions that we ever drive in. Just one small lapse of concentration and you’re off and it can be big or small. More chance of it being a big one. So I’m grateful for that.”

Carlos Sainz Jnr, who also reached Q3, said conditions were “really, really tricky” by the end of the session.

“But I’m glad that they left us out there because actually these cars generate so much spray and we evacuate so much water that there was a very thin line where if you put your tyres, there was actually some small amount of grip to actually run.

“I think if the session would have been stopped the track would have just got worse and worse and it would have been very difficult to get back out on track. But these cars do a good job of drying out tracks and keeping the water out of it.

“So I’m pleased. It was very, very difficult as I said, a lot of front locking, a lot of rear locking, a lot of improvisation on the car and that is the difference I think as drivers we enjoy enjoying the most because it’s the most natural instinct and what it comes to you as the first thing to do.”