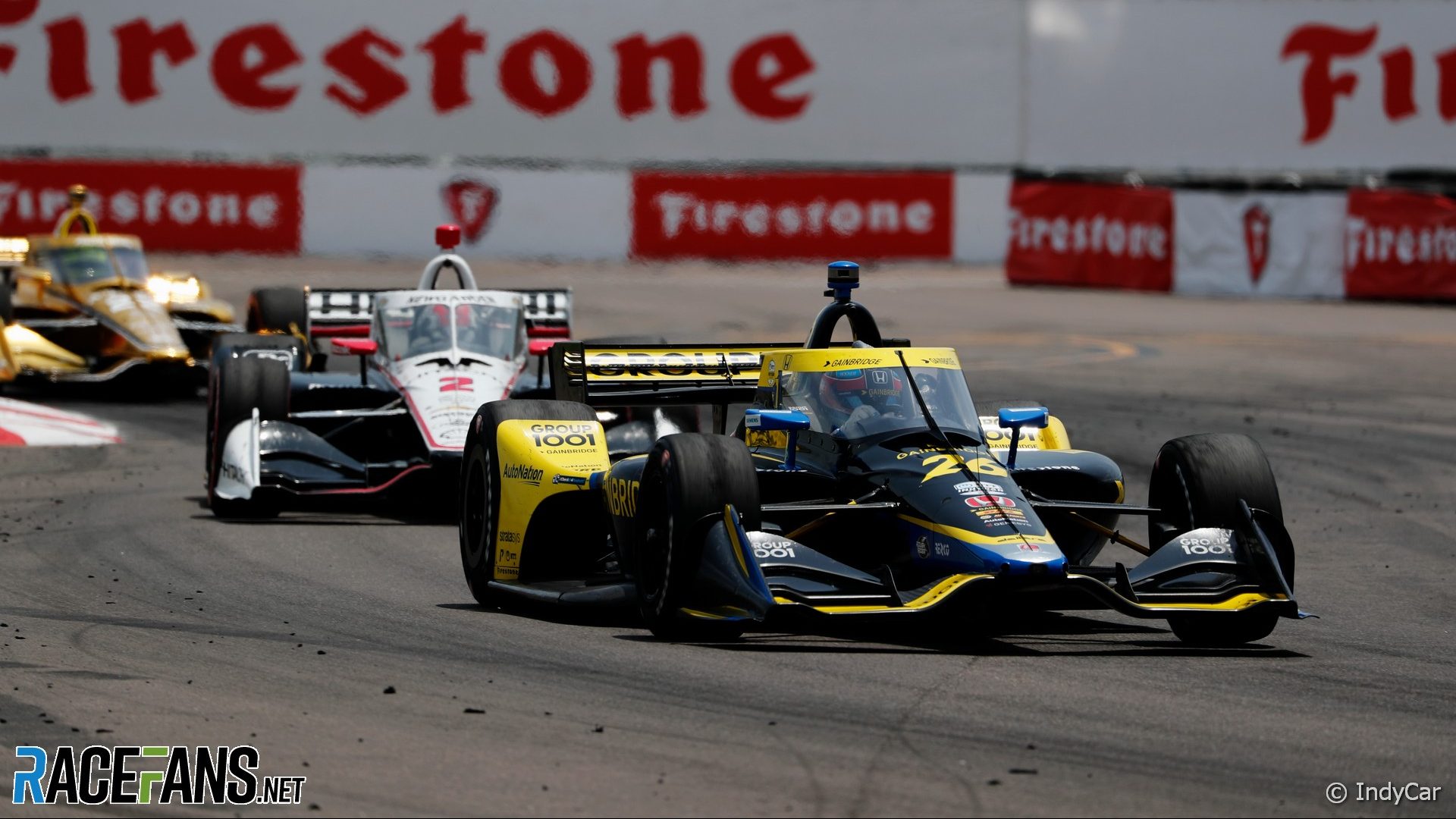 Two drivers whose races were ruined in the first-lap crash at Barber last week fought over victory on the streets of St Petersburg.

But two-times champion Josef Newgarden, who triggered the pile-up at Barber Motorsport Park one week ago, was fittingly denied the win by the first driver who hit his spinning car that day – Colton Herta.

The Andretti driver comfortably claimed pole position yesterday and took control of proceedings from the start of the race. Running on the ‘alternate’ tyres he, along with fellow front row starter Jack Harvey on the same rubber, edged away from the Penske duo of Josef Newgarden and Simon Pagenaud, running the harder tyres.

Sebastien Bourdais, who almost failed to take the start due to late-running repairs on his Foyt machine, clashed with Pagenaud at turn one. The pair continued, but Bourdais was left with a damaged nose.

With most drivers aiming to complete the 100-lap race with just two pit stops, fuel management was the order of the day in the early laps. On lap 17 Herta came on the radio to warn his team the track surface was starting to break up at turn nine.

But the first drama of the day unfolded at the final hairpin, where multiple NASCAR champion Jimmie Johnson skidded off and came to a stop. After several unsuccessful attempts to reverse away, the safety team was despatched to recover him, and the race went under caution.

Herta kept his lead when racing resumed, but towards the end of the first stint Harvey’s soft tyres began to fade, bringing the Penske duo within range. Newgarden picked him off quickly but Pagenaud was more tentative, holding station while a queue formed behind them, headed by Bourdais.

Graham Rahal had lunged past Alexander Rossi on the first lap, and that pair also joined the train, tailed by Scott Dixon. By lap 35 Newgarden had pulled seven seconds clear of them in just three laps, and Harvey finally headed for the pits.

Herta and Newgarden also came in with no loss of positions. However Newgarden’s pursuit of the leader was inadvertently compromised by a collision between Rahal and Rossi.

The pair had swapped places again, leading Rahal to make another bid to pass the Andretti driver at turn four. But they made contact, Rossi suffered a front-right puncture and was unable to turn into the following corner, coming to a stop with Rahal. The RLL driver quickly engaged reverse and sped off, but Rossi took longer to get going again and, juggling a punctured tyre and an overheating brake, briefly held Newgarden up.

Newgarden lost further ground when he and Herta came in for their final pit stops together under green flag running. Herta was by now 10 seconds up the road, far enough that when the pair came in on the same lap, Newgarden was delayed by the departing Herta.

However a second spin for Johnson at the exit of turn three triggered a caution period which allowed Newgarden to apply fresh pressure to Herta. Having taken the alternate tyres for the final stint, Newgarden hounded the primary-shod Herta at the restart, to no avail.

The process was repeated after Jones triggered another caution on lap 82. Having clashed with O’Ward at turn one, the Coyne driver became the second driver to assault James Hinchcliffe, who had already been hit by Takuma Sato earlier in the race. While Jones clattered into Hinchcliffe, O’Ward arrived on the scene and tipped the Coyne machine into a spin.

At the final restart Herta again kept Newgarden at sword’s length. Over the final laps Newgarden’s soft tyres finally began to fade, and Herta drew his lead back up to over two seconds, sealing his fourth victory in the series.

Pagenaud completed the podium behind Newgarden, followed by Harvey. Dixon worked his way up to fifth ahead of Sato. Will Power, who lined up a lowly 20th, rose to take eighth behind Marcus Ericsson. Rinus VeeKay and Bourdais completed the top 10.