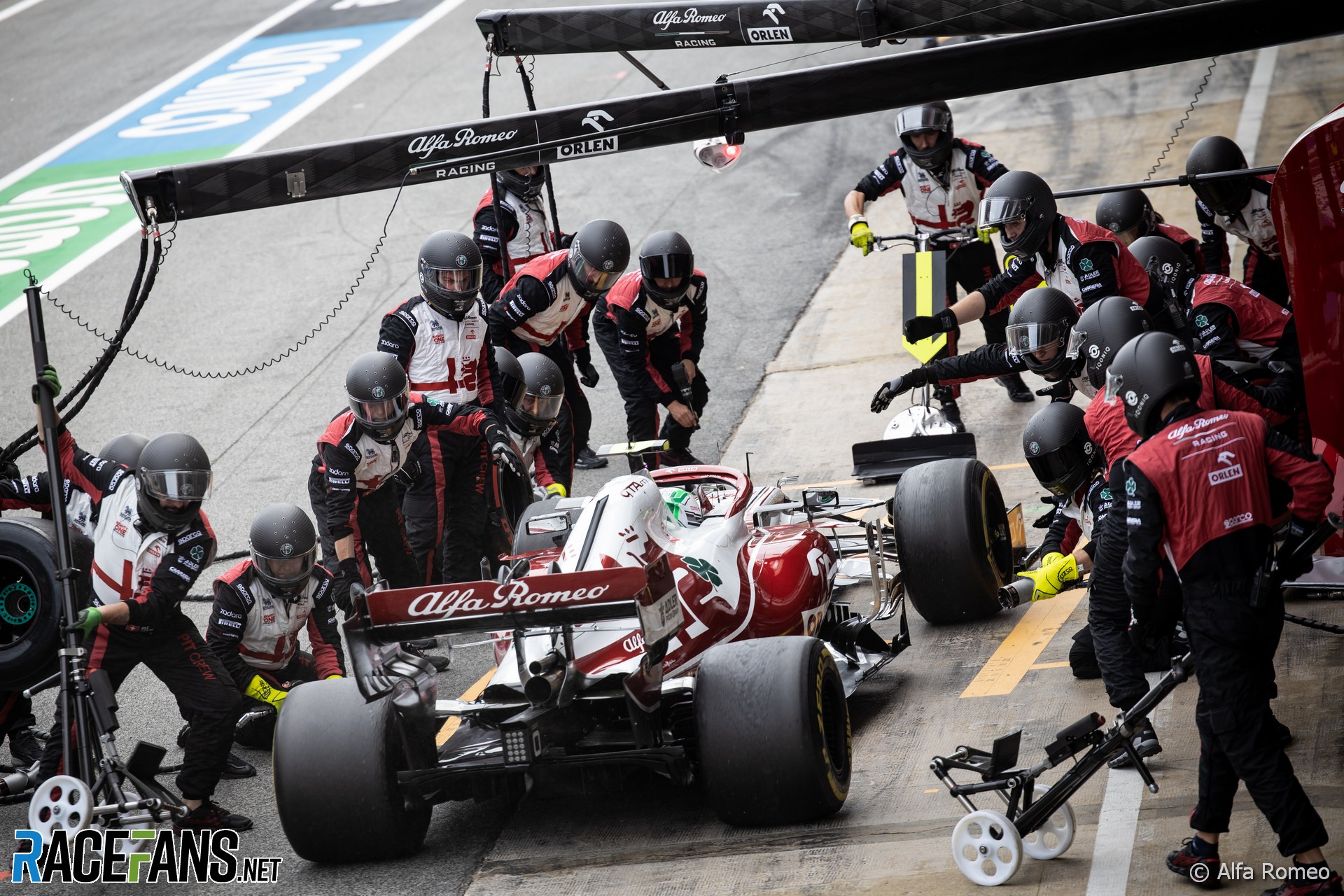 Antonio Giovinazzi rued another luckless race after a bizarre problem during a pit stop ruined his Spanish Grand Prix.

Alfa Romeo brought Giovinazzi in during the Safety Car period. However as his mechanics began to fit his new front-left tyre to the car, they discovered it was flat.

The team was forced to switch from his sole remaining new set of medium tyres to an old set. Adding insult to injury, Giovinazzi was unable to rejoin the rear of the field when the race restarted as an error on his dash display meant he was incorrectly instructed to follow the Safety Car delta time.

“My steering wheel was not working behind the Safety Car because it was still [showing] the delta to follow,” Giovinazzi explained.

“So when I start after the green flag I was 10 second behind. So just a shit race from beginning to the end.”

Giovinazzi said gambling on a pit stop under the Safety Car was “a good thing to do, but in the end we lost 45 seconds on a pit stop.”

Alfa Romeo discovered a valve on Giovinazzi’s wheel had become damaged, allowing air to escape. “The valve got damaged and [there] was no way to solve it at that point, there was no way back,” said the team’s head of track engineering Xevi Pujolar.

The tyre was correctly inflated when the race began, he added, but lost air at some point before Giovinazzi’s pit stop on lap eight.

“We have got a monitoring system. I just saw now that it was okay when the race started, but at some point in the garage, then it went wrong, I think a couple of laps before before the pit stop.”

“For sure it is an area that we can improve,” he added. “That should not happen.

“We should have been able to recover because it was a Safety Car. So if then we don’t have a problem with the dash, I think we were pretty much there at the back of the group.”

The puncture compromised Giovinazzi’s strategy, leading the team to fit a used set of soft tyres at his final pit stop (pictured). That and the time lost behind the Safety Car cost Giovinazzi a chance to score Alfa Romeo’s first points of the season, Pujolar believes.

“We wanted to have the two mediums, that was the plan with that the strategy. And I think it would have been fighting for the points because he would’ve been very well-positioned on what we could do with the tyres with two mediums. But anyway, it is what it is.”

Alfa Romeo have since identified the cause of the valve fault. “We know what went wrong and it will be fixed for the next race,” said Pujolar.

Giovinazzi has been plagued by misfortune over the opening races of the new season. He lost seven seconds with a slow pit stop in Bahrain, and was forced to make an extra pit stop in the Emilia-Romagna Grand Prix to clear debris from his radiators.