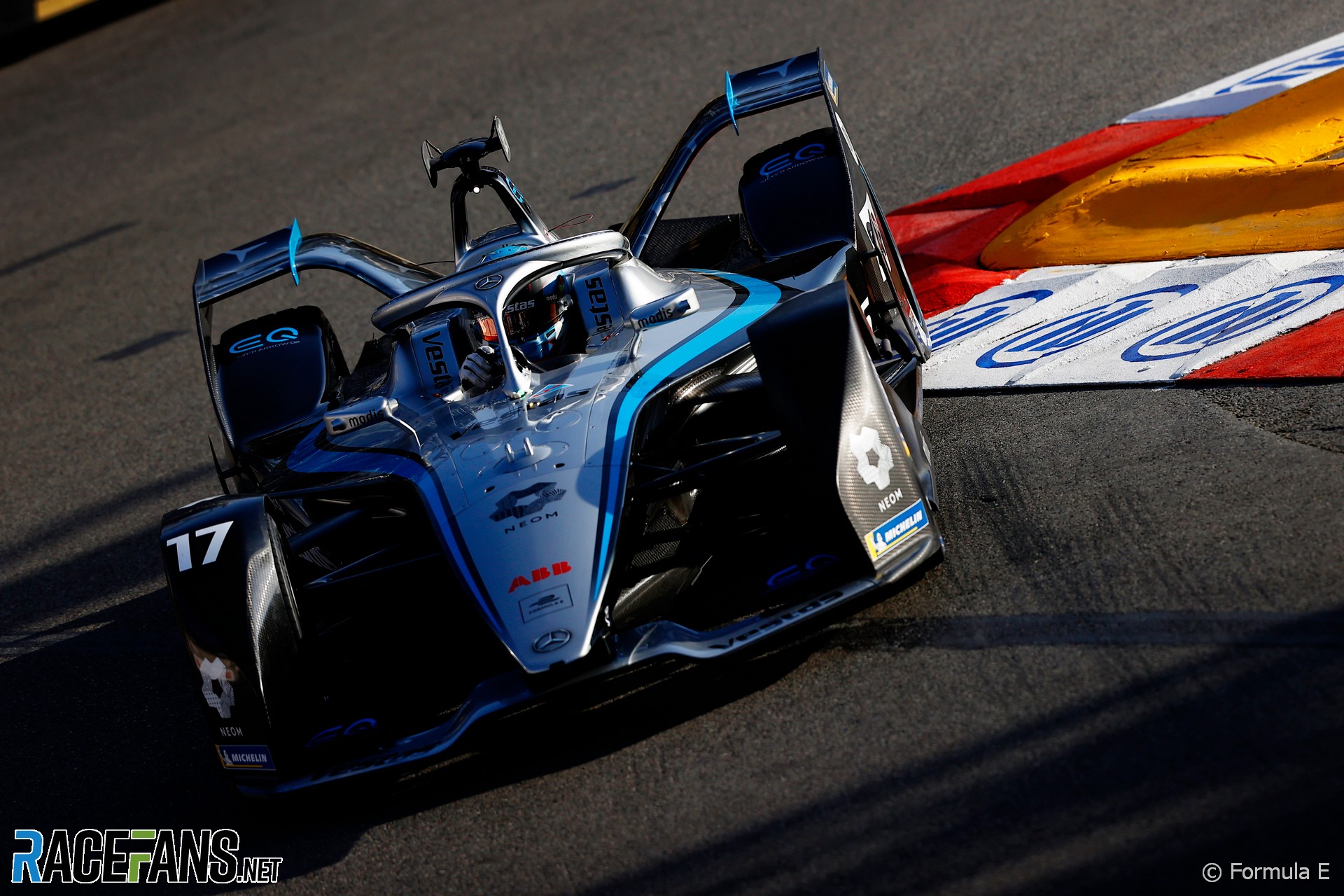 Stoffel Vandoorne had taken pole position, Oliver Rowland lining up alongside him – although both were out of title contention by that point.

Of the title contenders, Mitch Evans had qualified best – placing his Jaguar third on the grid, the only other serious challenger for the championship in the top ten Jake Dennis in a distant ninth.

However, it wasn’t to be – Evans’ car failed to get away on the grid, the powertrain going to ‘default’ mode and leaving him stranded for Edoardo Mortara to plough into, unable to avoid the car. Mortara and Evans lined up second and third in the title but by the time they would have crossed the start line were out of the race.

A safety car was initially called, before the race was red flagged while Mortara and Evans were extracted from their cars, with 43 minutes remaining in the race time. Evans and Mortara were able to get out of their cars and sent for precautionary medical checks.

A safety car restart was called and drivers were given the one-minute warning to line up at the end of the pit lane. However, due to needing to re-instate ambulance positions around the track, there was a significant delay while drivers sat in rapidly heating-up cars, waiting.

Stoffel Vandoorne led the field away on the restart but Jake Dennis immediately also left title contention, his car seeming to just fail to rotate around turn one, hitting the wall and crashing out. A full course yellow was called, with 40 minutes remaining.

Attack Mode had been set as two activations lasting four minutes, unlike yesterday’s single eight-minute period, with Nato the first to activate it, holding fourth position and then taking third when Alexander Sims took his own first Attack Mode.

Title-leader De Vries had moved up to seventh, running well into the points from starting 13th, with 30 minutes remaining. He was able to use cars activating Attack Mode to progress but with both of his own activations remaining.

Nato, in the final minute of his Attack Mode, was able to overtake Vandoorne for the lead with 29 minutes remaining, Sims following him through and Rowland – also in Attack Mode – pushing the Mercedes down to fourth.

Tom Blomqvist, who had qualified fifth in his NIO 333 car – the least competitive on the grid – was the man to stop De Vries rise up the ranks. After losing a place to the (at the time) champion-elect, Blomqvist overtook him on track and forced De Vries into a battle with him for several laps.

With 16 minutes to go the safety car was deployed after a battle between Lucas Di Grassi and Antonio Felix da Costa tangled into turn two, Di Grassi pushing Da Costa into the wall. Di Grassi was given a drive-through penalty for the contact, although by that point was long out of any points contention.

Racing restarted with 12 minutes remaining and Nato got away in the lead but under major pressure from Rowland and Sims. De Vries had moved up to fourth by this point and with none of the front runnings having any Attack Mode remaining, was within touching distance of a race win as well as the title.

De Vries made a move on Sims that allowed André Lotterer through as well but Sims fought back into turn two and fed De Vries back through the pack, the move costing De Vries a fall to seventh. The Mercedes cars almost collided, as De Vries was passed by Vandoorne but Vandoorne was able to take the place and move forward past both Porsches to take third from Alex Sims, using his final Attack Mode activation.

With two minutes remaining De Vries made a move to overtake Wehrlein – even though he didn’t need to move any further forward to take the title, Wehrlein defending hard and the two colliding to bend De Vries’ steering.

Lotterer made a move on Sims for fourth and the two ran alongside each other, wheels locked together and damaging their bodywork. Although Lotterer got through, Sims stayed in hot pursuit.

On the final lap, De Vries found himself in more trouble as Sam Bird was able to pass him for seventh place, De Vries saying he felt like “a target” on track.