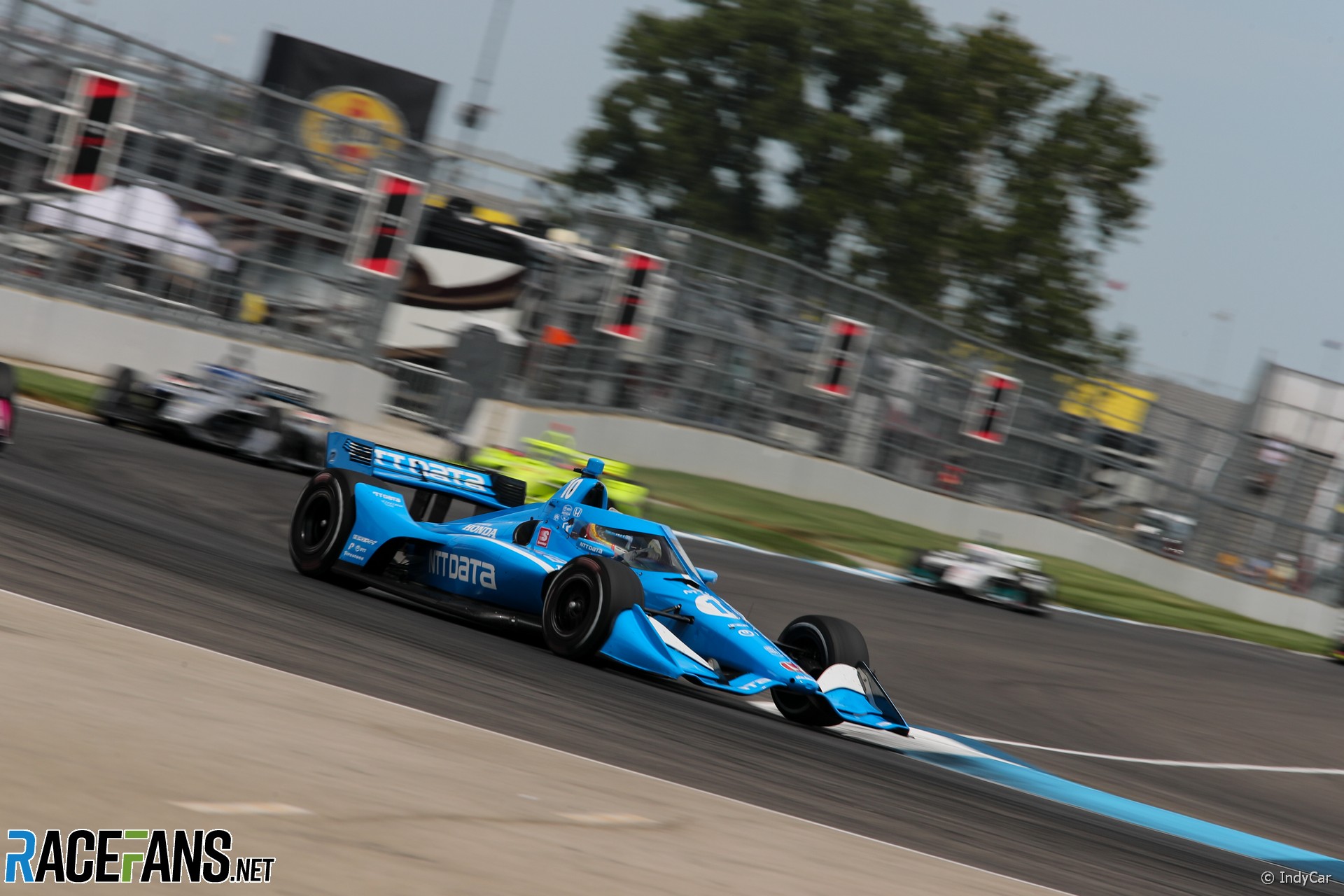 Alex Palou shrugged off the engine failure in yesterday’s race at Indianapolis which allow championship rival Patricio O’Ward to cut into his lead.

“It hurts, obviously,” Palou admitted. “It hurts when you have a [fourth place] car and you’re there in the race fighting, doing a good job, and you can’t finish. [But] it is what it is, we cannot change that.

“I’m disappointed, but there’s nothing we could do, nothing the team could have done differently. I think we did a really good job with set-up and things. Just a bump in the road that we got here, but it’s all right.”

Palou was on course to extend his championship lead over his closest rivals before the failure. The number 10 Ganassi Dallara/Honda was running fourth, two places ahead of Patricio O’Ward with Josef Newgarden, Scott Dixon, and Marcus Ericsson all outside the top 10 with 17 laps remaining.

Palou had a chance to create a lead of 50 points – equivalent to a race win – over O’Ward with four races remaining. But his retirement and O’Ward’s fifth-place finish means Palou’s lead was reduced to just 21 points.

“The good thing is we still have a cushion in the points,” he said. “It’s not like we lost 200 points. We lost, what, 30 points? That’s nothing. We’ll move on and get them back at Gateway, Portland, Laguna Seca and Long Beach.”

The Ganassi driver reported engine mapping problems from the first lap of the race. “We started having some issues with the mapping, and we weren’t sure what was going on,” said Palou. “We managed like 60 laps, and it was fine. We were losing a bit of power, but it wasn’t too bad. We were trying to fight for a podium, and we had to stop.”

Palou remains optimistic about his chances of maintaining his points lead over O’Ward, Dixon, Newgarden, and Ericsson over these last four races. But he’ll soon have a harder job in front of him next week at Gateway.

Under the IndyCar engine rules, every full-time entrant is allowed to use up to four engines for the duration of the season – including tests – with an allotment of 10,000 total miles for the season. The number 10 Ganassi team hadn’t yet crossed that 10,000 mile threshold when they had to change engines prior to the Indianapolis 500, which resulted in a six-place grid penalty for the first race of the Detroit Grand Prix double-header for an unapproved engine change.

Another unapproved engine change prior to the Music City Grand Prix in Nashville meant another six-place grid penalty for Palou. His latest engine failure well short of the 2,500 mile threshold all but guarantees Palou another grid penalty in the next race.

That happens to be the last oval race of the season at Gateway Motorsports Park, and the grid penalty for unapproved engine changes is a bit more severe when the next race is at an oval: Instead of a six place grid drop, Palou will drop nine positions from where he qualifies at Gateway.

It’s been a snowball effect that started when Palou lost an engine during pre-season testing at Barber Motorsports Park, where Palou would later score his first IndyCar victory. On track overtaking at Gateway will be at much more of a premium than it was at the Indianapolis 500, which could make his pending nine place grid drop all the more damaging. And that’s before getting into the possibility of changing engines once more before the season ends at Long Beach, a venue that Palou has never driven at before.