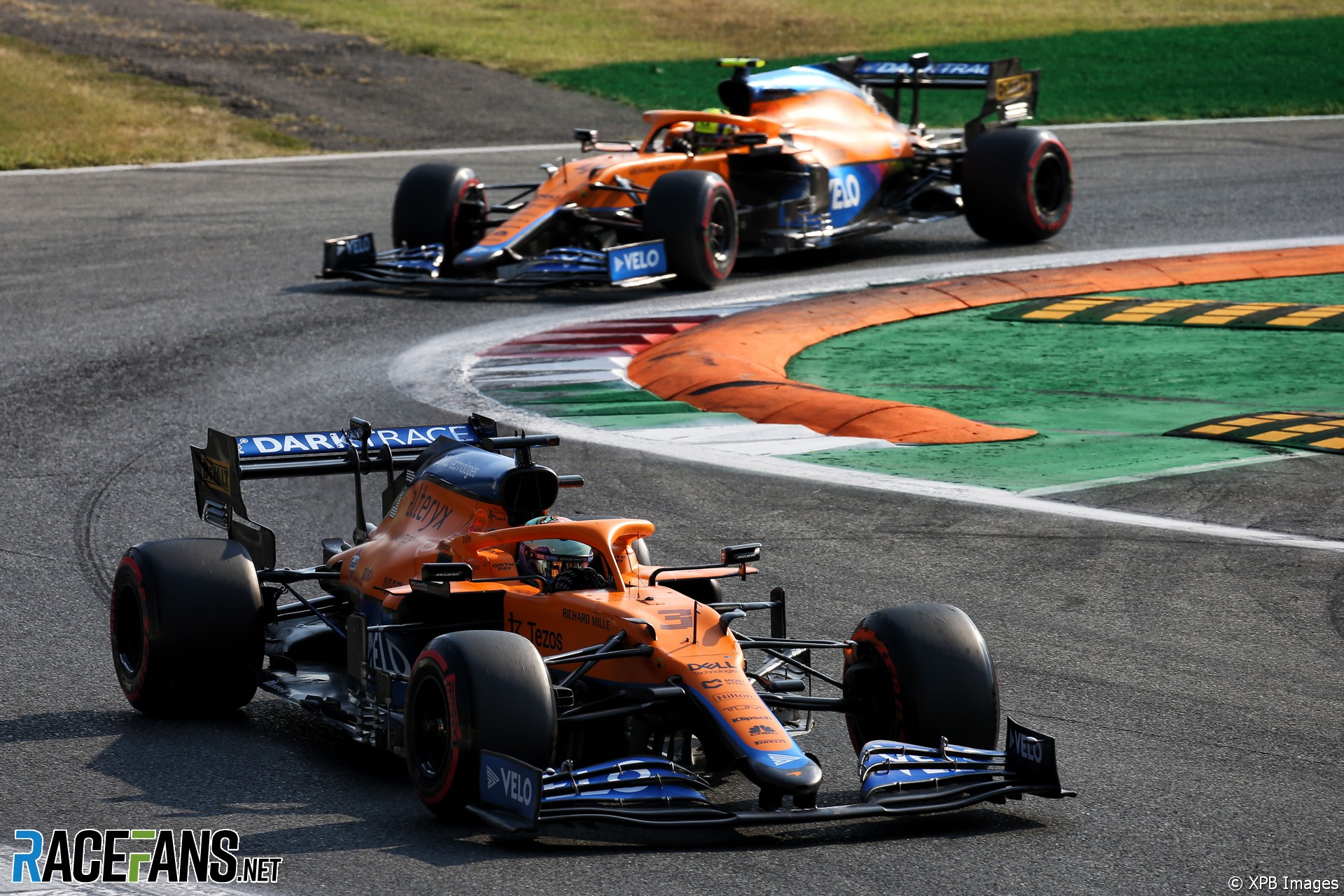 McLaren believe they have a chance to end their nine-year victory drought if they can displace Max Verstappen from the lead during the Italian Grand Prix.

Daniel Ricciardo and Lando Norris line up second and third in their MCL35Ms for today’s race, behind the pole-winning Red Bull driver. The pair overtook the slow-starting Lewis Hamilton in yesterday’s sprint race and kept him behind until the end.

Norris believes Verstappen will have a hard time passing them if they can out-drag him in the grand prix.

“Definitely from a Mercedes [power unit] point of view compared to Red Bull, we definitely seem to have a bit of an advantage,” he said. “So that’s good.

“Some teams are obviously running like a lot more wing as well, like Ferrari, AlphaTauri and the Aston, they’re just running more wing. So I don’t think it’s easy just to say it’s the power units or not. But we are competitive in the straights, we’re running quite a low downforce compared to a lot of people.

“Against that Red Bull if we can be ahead, considering I kept Hamilton behind and they were on pole by half a second to the Red Bull, maybe we would have that little bit more of a chance comparing to Max. So there is that chance.”

“Perez didn’t drive through the whole pack, he got stuck behind Giovinazzi. So there’s a chance, for sure.

“I think we just have to wait and see what it’s going to be like to figure it out. But it was done last year and like my race now, there is this ability to hold people up and defend in the right places and not let them through.”

By taking second and third on the grid, McLaren have achieved their strongest qualifying performance since the 2012 Brazilian Grand Prix, when they scored their most recent victory. Team principal Andreas Seidl is hopeful they can attack Verstappen at the start.

“We’re starting P2 and P3 and with having a competitive car there may be opportunities to be there. So that’s how we will approach the race. Of course we will not try to do anything stupid, but when you start from P2 and P3 here in Monza with the long run to the first corner as well there’s always a chance to get a good tow and maybe be first after the first corner.

“But still, we need to be realistic then about how the race could evolve. Yes, there’s a chance to keep faster cars behind. At the same time it’s a long race.

“We have seen also that with stint length, the longer the stint, the Mercedes and the Red Bull obviously have an advantage in terms of tyre degradation and so on. So it will be very important to work out tonight what’s best strategy for us as a team going into this race and to see how we can manage to stay at least at the position we start the race.”

But McLaren need to capitalise on the opportunity to out-score closest championship rivals Ferrari, whose drivers will start fifth and sixth, Seidl added.

“I would be very happy tomorrow night if we walk away with solid points scoring for both cars in our battle for the constructors championship,” he said. “At the same time, of course we want to be there if there’s opportunities because it would be simply another great reward for the work everyone is putting in the team.”