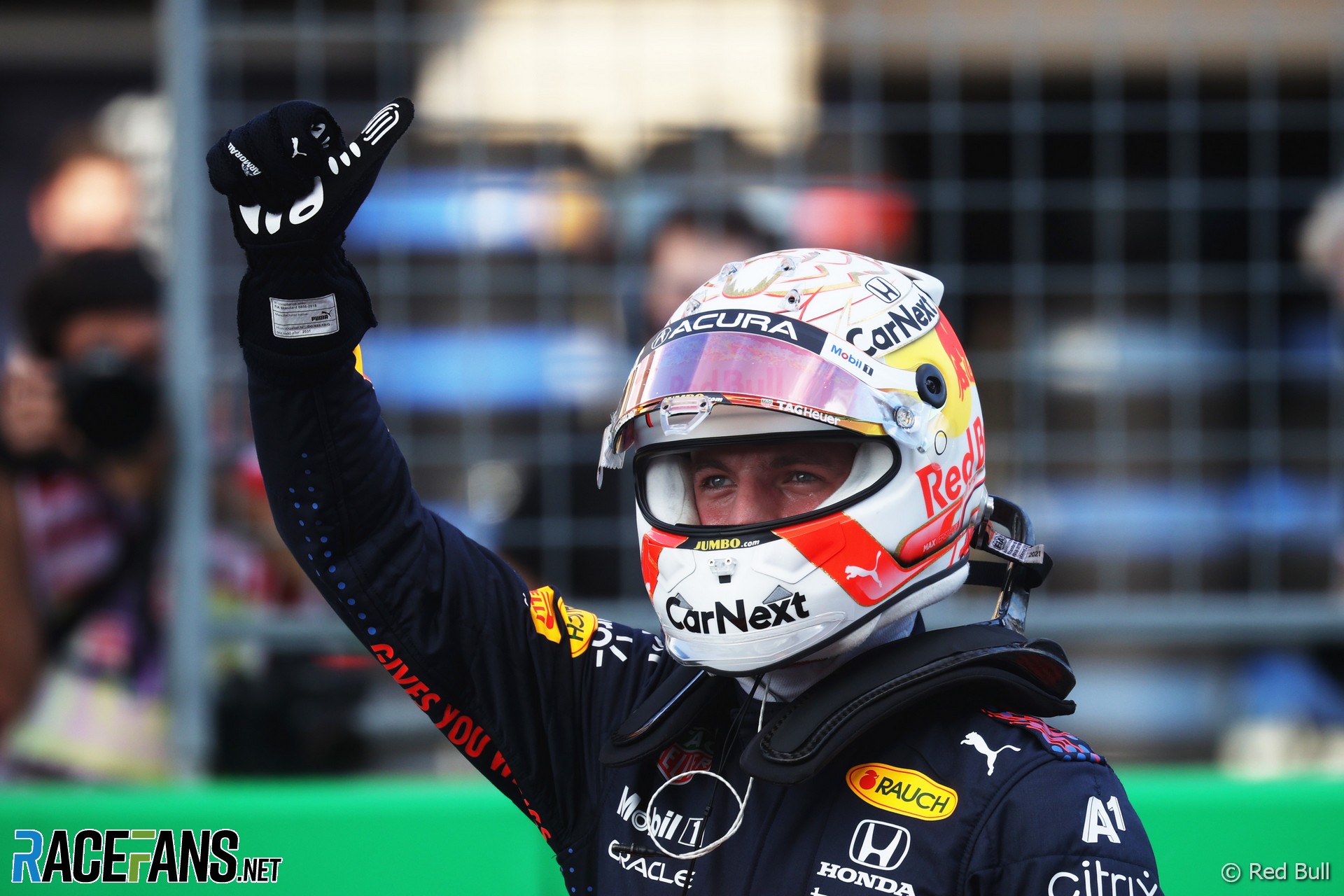 Max Verstappen admitted he felt some surprise at taking pole position for the United States Grand Prix following Mercedes’ strong start to the event on Friday.

The Red Bull driver was almost a second slower than the Mercedes pair in first practice at the Circuit of the Americas, with the rest of the field half a second or more further behind.

“After FP1, I was a bit like, oh, okay, it’s quite a big gap,” Verstappen said after taking pole position. “But then I think slowly we just improved a bit. And then today we seem to jump ahead because that’s a great effort from the whole team.”

However Verstappen hasn’t been entirely comfortable at the wheel of his RB16B this weekend, particularly when running the soft tyre in qualifying.

“It was a little bit up and down, I would say, just getting to the limit of the car,” he said. “It felt a little bit more difficult for me this whole weekend so far to try and get that last bit out of it.

“Even in qualifying I had to work up to it. On the mediums, actually, I felt really good. I think in Q2 that was a good lap and it seemed like it suited me a bit more in terms of driving.

“Then the first run in Q3, again, it wasn’t perfect. I just couldn’t really get the same out of it in terms of feeling compared to Q2. So then I had to dig deep in Q3 run two.

His final run was complicated by a few spots of rain. “It started spitting a bit on [my] visor in the last sector so it wasn’t ideal,” said Verstappen. “But to be on pole of course is great, especially in a weekend so far where, like I said, it was a bit more difficult to find that last bit.”

“Maybe [it’s] a tiny bit of a surprise,” he said. “But you can clearly see it has been swinging a bit through the whole season. Luckily, it’s still doing that.”

However he doesn’t believe Red Bull’s showing in Austin proves they will hold the upper hand at coming races.

“You can maybe look like favourites going into the weekend, but you still need to pay attention to every single detail to try and make it work. It’s so closely matched that if you maybe miss one tiny detail or you just can’t bring it together for whatever reason you miss out. And that’s what happened to us, for example, in Turkey.”

Verstappen drew satisfaction from his ninth pole position of the season because it had been one of the more challenging ones to achieve.

“Normally I always feel very comfortable in the car and I usually get up to speed,” he said. “But it just seemed on this track, this weekend it has been a bit more difficult.

“But it can’t be smooth all the time, right? That also makes it challenging and fun because otherwise it gets boring if it’s always too easy.

“I think as a team we worked very well together. They also tried to help me out to try and improve and at the end to then just put it together in Q3 it is, of course, what you want. It’s not always what you get, but it worked out this this weekend.”