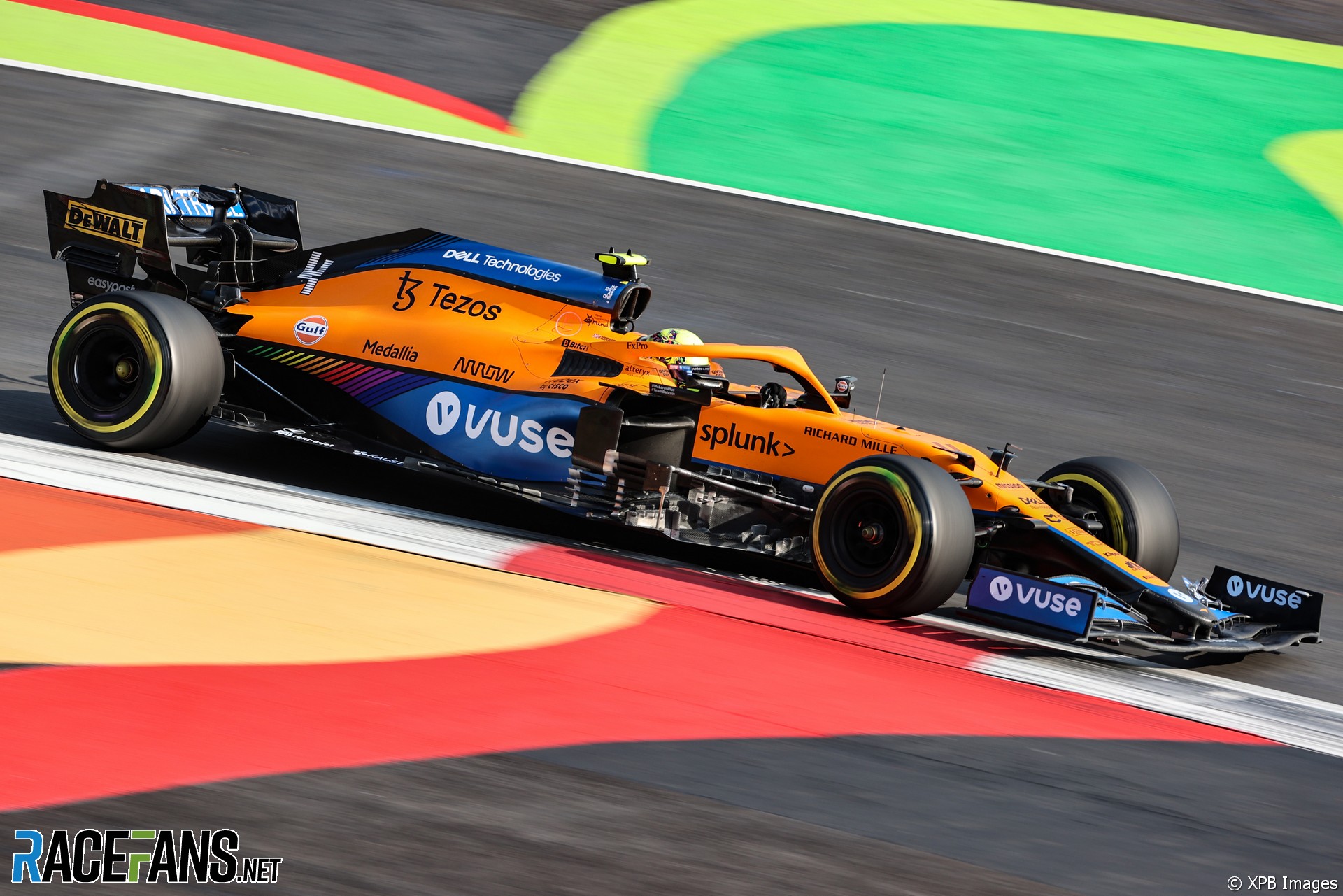 In the round-up: Lando Norris says McLaren have to hope for a big overnight discovery to become competitive around the Autodromo Hermanos Rodriguez.

“Not a great day” for McLaren after lack of pace

Norris said Friday at the Mexican Grand Prix had been “not been a great day” for McLaren after ending practice in 12th place.

“So there’s definitely some work to do overnight to try and make some progress. I’m confident we can do it and I think we have some good directions to go in from the tests we did today.”

The Red Bull driver arrives at his home race having finished on the podium at the last two races. “I really want to carry on my form and I’m feeling more more at home now with the team, with the car,” he said. “I really hope I can put a great Saturday here.

“Overtaking is generally very hard here, we put a lot of demand on the brakes, on the engine. It’s always a very tricky race if you’re not at the front so I look forward to a good qualifying.”

Max Verstappen explained his role in the timing of his team mate’s first pit stop during the United States Grand Prix. The Red Bull driver urged his team to pit Sergio Perez in order to force Mercedes to respond by bringing Lewis Hamilton in.

“You should force Hamilton not to go long with Checo,” Verstappen told his team.

Verstappen declined to confirm whether the scenario had been discussed before the race when asked by RaceFans. “For me it was just a logical thing to think about.

“You just don’t want them to have a massive tyre advantage, and we have two cars up there, so you should use that advantage.”

Gregoire Saucy will make his FIA Formula 3 debut with ART next year having won the Formula Regional Europe championship with them this season. He tested for the team at Valencia’s Ricardo Tormo circuit earlier this week.

“ART Grand Prix was very keen to take another step forward with Greg,” said team principal Sebastien Philippe. “He showed the full extent of his talent and maturity in 2021 and in addition to this, we have come to know and appreciate each other both personally and sportingly.”

The 2021 FRECA champ and @ARTGP will bring their title-winning partnership to our grid for the 2022 season! 🤩#F3 #RoadToF1 pic.twitter.com/uPge7MJBhZ

Herta on F1 chance: ‘It was going to be my decision if I wanted to go’ (Racer)

"Herta: 'It needed to be the right situation, have the right funding to either be competitive, or get to that point to be competitive. But it takes a lot to drag me away from IndyCar, too, because it’s what I grew up (with)'."

"Dennis: 'I can’t say that I had so much confidence in myself that I thought I could just come in and almost win the championship in my first year. However, I definitely came in with an attitude that I can perform well in single-seaters – I knew I could do well in these cars.'"

"These big caveats are why I'm referring to this geometry as the 'FW43B(AR)', as I don't want it to make the hard claim that it is the FW43B. Given the above, the geometry isn't perfect, but it's certainly the best F1 model the public has ever gotten a hold of."

"With the Italian F4 season completed and the Spanish and ADAC F4 campaigns due to finish within the next fortnight, Tatuus F4-T014 cars are quickly becoming available for purchase by teams intending to compete in GB4 in 2022. MSV has now acquired 15 cars plus spares from Europe for resale from December onwards to prospective GB4 contenders, while dozens of other chassis are available from individual teams."

"We are selling it as a British Monaco. The only way you can protect jobs is to have a vibrant local economy which is where the eGrand Prix focuses itself, it will be a centre for sustainability."

Antonio Giovinazzi’s position at Alfa Romeo is the final block to fall in place for the 2022 grid – Andrew T considers what the last blocks to confirming or denying him an extension would be.

I believe that the delaying of the announcement is an indication that Alfa Romeo tries to have someone in their car, that is problematic to negotiate with (or with his management) due to ties to other teams and interests.

Giovinazzi or Hülkenberg would be an easy case and could have been announced months ago if Alfa Romeo wanted to go down this way. Zhou and de Vries and their Renault and Mercedes background respectively generate the issues.

Giovinazzi has shown everything a team has to know about him to decide if he deserves another year or not. Beating Räikkönen in qualifying on a regular basis sounds good, but staring at the Finn’s rear wing right after the start or at the end of the first lap pretty sums how much outqualifying Räikkönen worth.

Gio is a nice guy, I’d certainly miss him, but considering the sheer number of young talents knocking on the door of F1, I just don’t see him retained for another season. I also don’t think that’s fair from the team’s side that they keep him waiting and hoping, not that there are any more seats left that he could have targeted.
@andrewt