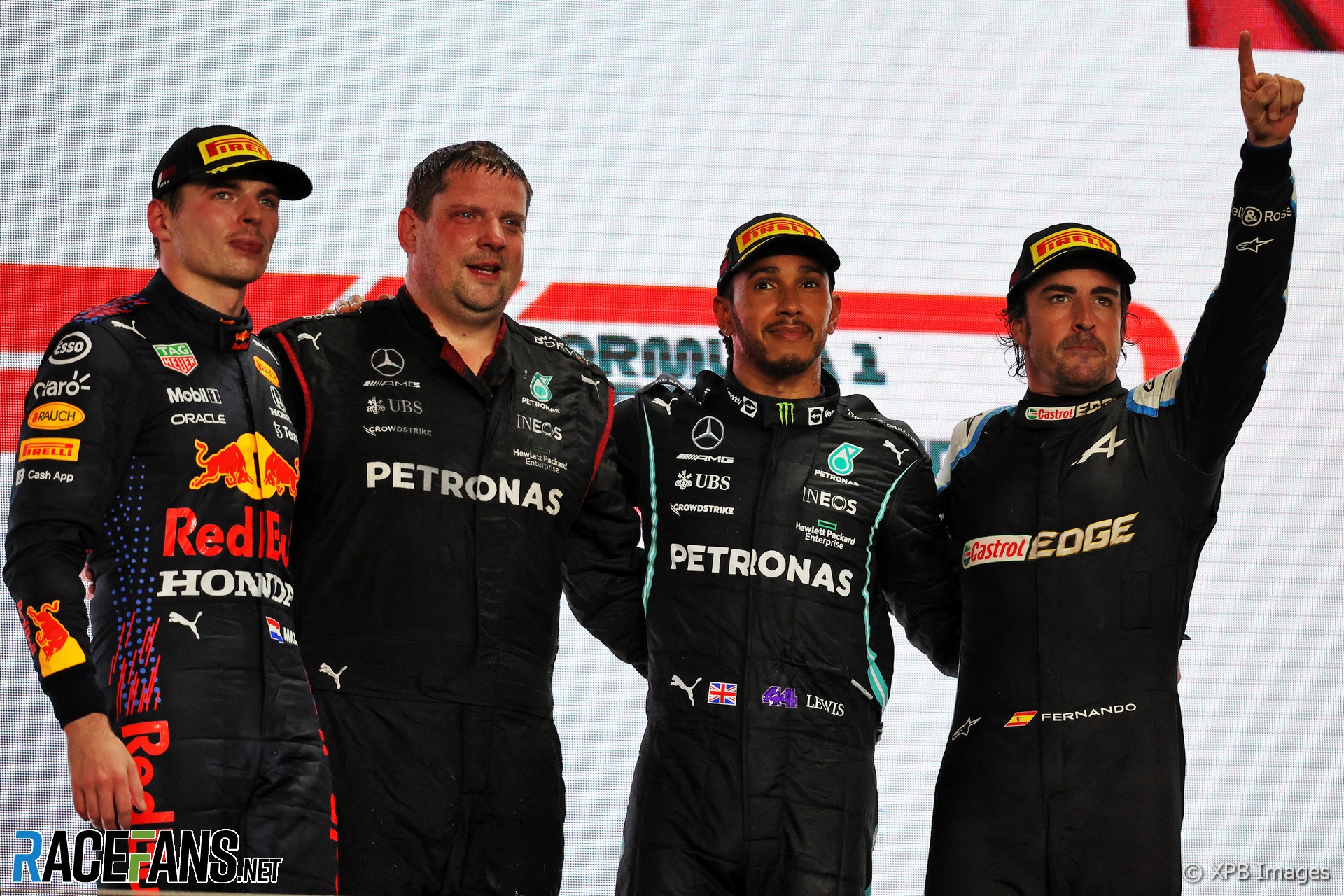 In the round-up: Fernando Alonso says he is ready to fight Lewis Hamilton and Max Verstappen for the championship next year – if his car is quick enough.

While Alpine CEO Laurent Rossi recently set a 100-race target for the team to become a competitive force in Formula 1 again Alonso says he is ready to fight next year if the team produces a front-running car for the new technical regulations.

“It’s difficult to predict what is going to happen in the next few years,” said Alonso, who finished third behind Hamilton and Verstappen on Sunday. “But I would love to be in the fight with them and whoever makes a good car next year.

“It’s a reset for everybody and it’s up to us to produce a fast car. It’s not like this year, which was a continuation of the last campaign. In 2022 everyone has the same cards so we need to play smarter and hopefully produce a fast car.

“If we are in that position I feel strong, I feel ready to take the battle and let’s see.”

Sebastian Vettel admitted he “could have started 18th” after losing seven places at the start of Sunday’s grand prix.

“I was a bit squeezed because Valtteri [Bottas] had a bad start and I had nowhere to go. Then there was a lot of dust, a lot of cars around me and I lost the car in turn one, trying to recover some of the positions and went to wide and lost basically all the positions.”

He recovered to score a point but team mate Lance Stroll used the AMR01’s strong race pace to score his best result of the season with sixth.

“The car was pretty quick,” said Vettel. “Once we had free air we were, I think, having the same pace on the softs than the cars in front.

“We came from 18th somehow back to P10 which is a reasonable recovery. We held off the AlphaTauri and overtook a McLaren. So it’s been a strong race but obviously just starting on the back foot hurts.”

Mercedes made gains without upgrades – Hamilton

Having won the last two races in a row, Lewis Hamilton said Mercedes’ improvement in form has come through set-up work, without introducing new parts to their car since July.

“As the year’s gone on we’ve understood the car more, we’ve definitely been able to squeeze more performance out of the package without bringing any upgrades,” he explained. “We’ve not had an upgrade since Silverstone, so it’s quite phenomenal to see the small bits, the increments that we’ve been improving.

“It’s very close between the two cars, clearly, so I think that lines us up for a great battle,” he said. “But in these last two, I think we’ve just been able to do a better job overall. I hope that we can take this form into those next two.”

The digital-first approach being deployed by Liberty Media continues to produce impressive results.

Whatever this grid turns out to be, I just hope some bright spark in the administration doesn’t say “let’s do it like this all the time from now on!”, as someone often does in these circumstances, and then they move qualifying to 30 minutes before the race start in 2022

F1 did itself no favours this weekend. Flaky decision from stewards re quali, flaky service from Pirelli, boring race, no one but Lewis saying anything critical about the host nation and pre-race arse-lickery off the clock on the grid. Oh, but Alonso!

"(Winning the title) would be our biggest achievement since Red Bull have come into the sport. I think it would even eclipse what we did in the V8 era."

"What I’m really excited about is guys like him, when you put more people around them – more personnel, more laptops, more intense work – someone like him is soaking it up, whereas some guys can be very good in junior categories but they melt when they get to the Formula One levels of intensity and scrutiny."

2021 trio did ‘phenomenally,’ says Oakes, who believes people ‘underestimate’ how tough F3 is for rookies (Formula 3)

"I think that Helmut Marko's eye for spotting (drivers) and dropping them in initially always seems crazy to people, but there is no doubt from our side that Jak (Crawford) and Ayu (Iwasa) are massively talented."

It wasn’t right to criticise the flag marshal for doing his job correctly, paid or not.

If there’s an incident, there’s a flag. That’s how it should be. It’s the flag marshal’s job to decide when to put out a yellow flag.

I work as a volunteer at race events and have been at marshals’ briefings. They’re very much encouraged to err on the side of caution. It’s better to neutralise a session than lose a life.
@Gardenfella72