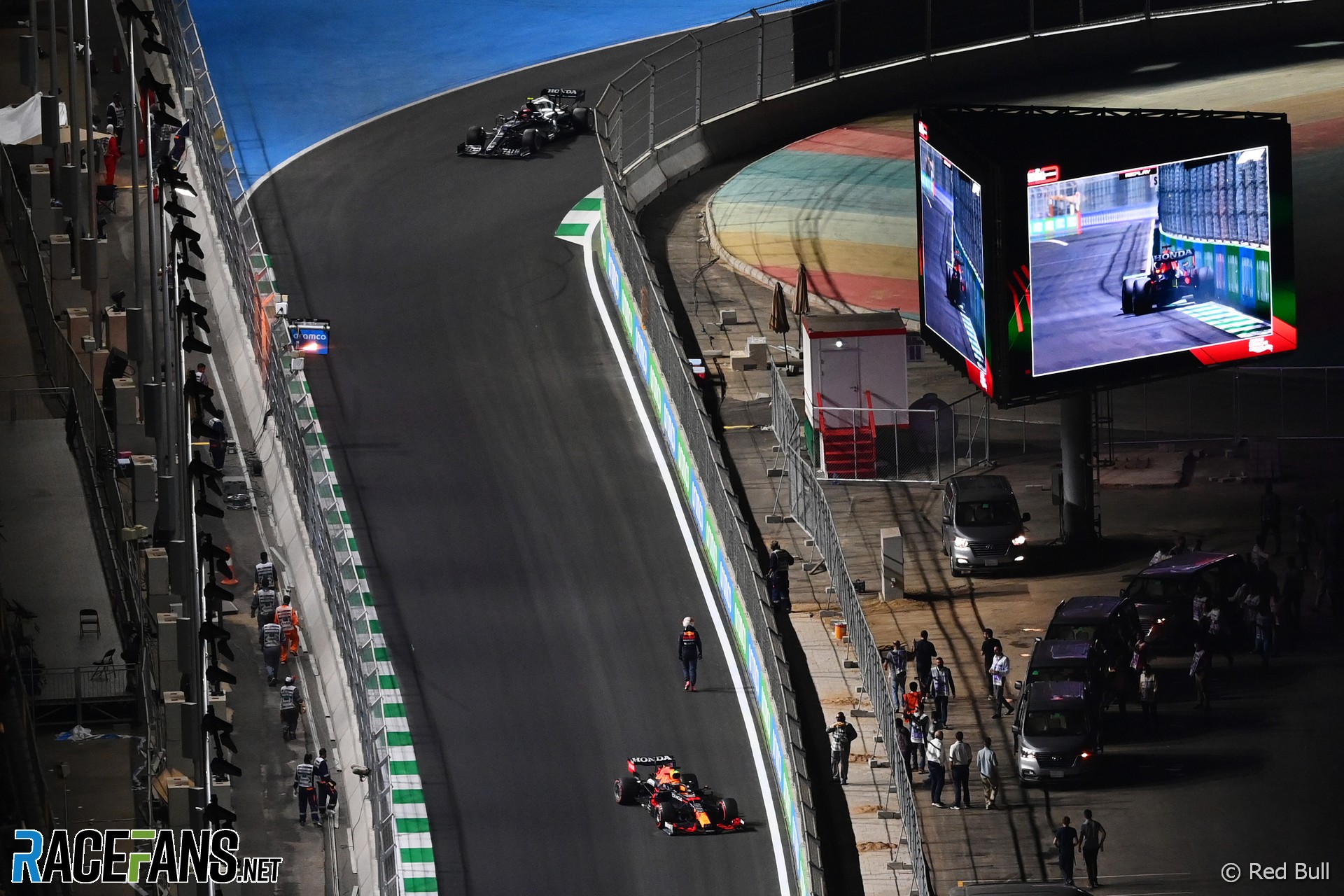 Max Verstappen says he is “extremely disappointed” after throwing away a potential pole position by crashing at the final corner on his last lap in qualifying.

However he believes his car is more competitive than in Qatar and he still has a chance to win from third on the grid.

The championship leader had been on course to take a stunning pole position around the Jeddah Corniche Circuit after he was up by over two tenths on rival Lewis Hamilton in the first two sectors. But a mistake in the 27th and final corner on the circuit saw him tag the wall with the rear of his Red Bull, damaging his car and ending his hopes for pole.

The error secured pole position for rival Lewis Hamilton as the Mercedes driver looks to close the points advantage Verstappen holds before the final round next weekend in Abu Dhabi.

“I arrived there and for my feeling I was braking at the same point,” Verstappen explained. “But I had a little lock up and I still tried to, of course, finish the lap. But I clipped the wall on the exit, so I couldn’t continue.

“He’ll be frustrated, I’m sure,” Horner told Sky. “He knows what a good lap it was, so he just needs to put that behind him now. He’s still P3 on the grid. He needs to have a good start. Anything can still happen in this race.”

With concerns over whether Verstappen’s gearbox may need to be replaced due to damage from the accident – which would earn him a five place grid penalty – Horner says such a penalty would be “especially brutal”.

“We’ll get the car back. Hopefully, it’s not a gearbox penalty because that will be especially brutal,” said Horner.

“I think it’s going to be very hard to overtake here, so it’s going to be strategy and we know what happens with safety cars, you know, reliability, etcetera. So we’ll see. But grid position on any street circuit is crucial.”

Verstappen says he still has confidence that he will be able to take the fight to Mercedes in tomorrow’s race, although admits he expects overtaking will prove difficult.

“I haven’t really followed the car around there, so it’s a bit difficult to say, but I hope it’s going to be alright,” he said.

“But it’s not only that. We don’t really know the tyres, are they going to behave? So I’m confident, of course, I would have liked to start first, but now starting third it’s a bit more difficult, but definitely not impossible.”

“It seems like we can fight,” he added. “In Qatar we were really off the pace. It seems like our car is working a bit better here.

“I hope that tomorrow on this track we can follow well and then I’m sure if that’s the case then we have a good shot at it.”

22 comments on “Verstappen: Fighting for win “definitely not impossible” from third after crash”