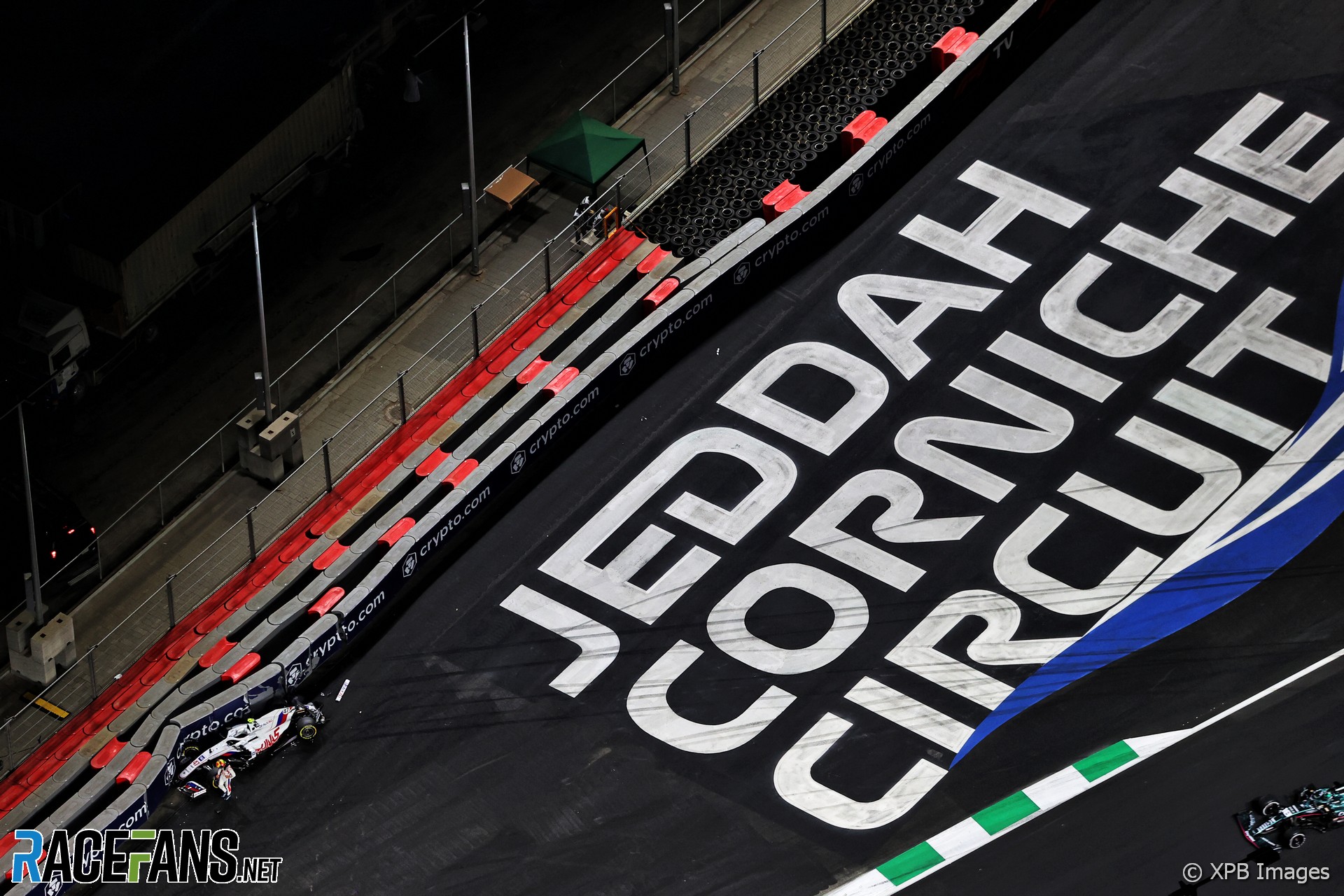 The Saudi Arabian Grand Prix was a controversial addition to the Formula 1 calendar for reasons other than the circuit’s layout.

But once drivers sampled the 6.1-kilometre Jeddah Corniche Circuit, it became clear some had concerns over its configuration. Before the race began Sergio Perez called it “very dangerous” and predicted a “big shunt”.

His prophesy came true on Sunday – for himself and others, and not just those in F1. In its effort to create a fast, exciting, challenging layout, had the sport flirted with danger a little too much?

The Jeddah promoter’s moniker of ‘world’s fastest street circuit’ was not just an attractive marketing gimmick – it reflected the unique nature of the circuit’s layout. Whereas typical street circuits including Baku, Monaco and Singapore – as well as those raced in series such as IndyCar and Formula E – weave around city streets, past high-rise buildings and under bridges, Jeddah’s layout was crafted from an entirely blank slate.

Such freedom allowed designers, Tilke Architects, to craft a stretch of asphalt that featured 27 numbered corners as well as average qualifying lap speeds north of 250kph – faster than Silverstone. But unlike a traditional circuit, Jeddah was hemmed in by barriers which drivers were rarely more than a handful of metres away from at any point along its six kilometre length.

Several of them, including Perez, pointed out the strangeness of the decision to place the barriers by choice rather than out of necessity. This was one aspect of the track’s layout drivers indicated they would like to see changed.

The three days of track action over the race weekend was the first chance to see how the highly anticipated new circuit would look with real drivers in real cars, as opposed to simulations and hypothetical scenarios. As it turned out, an uncomfortable number of heavy accidents did indeed occur over the weekend, with both the grand prix and Formula 2’s three rounds disrupted by multiple red flag stoppages and Safety Car periods.

Formula 1’s most severe accident involved Charles Leclerc, Sergio Perez, George Russell and Nikita Mazepin at the second restart, which saw the latter three retire from the race, but thankfully walk away relatively unscathed. A serious accident at the start of the F2 feature race between Theo Pourchaire and Enzo Fittipaldi led to both drivers being taken to hospital with Fittipaldi suffering a broken heel in the crash.

The 220kph left-hand kink of turn 22 proved the most treacherous section of the circuit over the three days. Leclerc and Mick Schumacher both suffered near-identical crashes into the barriers after losing control of their cars on entry, while F2 drivers Pourchaire and Logan Sargeant both shunted in similar fashion at the corner. The F2 feature race was red-flagged for a second time and abandoned after Olli Caldwell and Guilherme Samaia collided in the corner, although thankfully neither driver experienced particularly heavy impacts.

A series of near-misses also became a major talking point of the weekend. Heavy traffic in practice and qualifying sessions for both series led to alarming scenes of drivers on hot laps flashing past rivals circulating at much lower speeds who were either cruising back to the pits or looking to build space ahead of starting flying laps of their own. Mazepin had to take sudden avoiding action in third practice after rounding turns seven and eight at speed, only to find Lewis Hamilton’s Mercedes crawling along the apex when he arrived.

Drivers were near-universal in their praise of the circuit in terms of how exciting it was to drive. But many expressed concerns that they unsighted too often, at high speeds in corners. “I think the first sector, where Mazepin and Hamilton [happened], that’s a bit sketchy,” said McLaren’s Daniel Ricciardo.

“It’s a bit of a recipe for disaster,” agreed George Russell. “I think there are some things they need to modify to make these kinks just straights. It is so blind and we have already seen too many incidents waiting to happen.“

Sebastian Vettel perhaps offered the most illuminating view of how drivers saw the track, likening it to ‘Suzuka, but with barriers’.

Through their extensive regulation – of track configurations, run-off areas, barrier designs, minimum track widths, the quality of facilities and many more elements – the FIA deemed the Jeddah track is safe enough to host the world championship and its junior categories. It was officially granted its FIA grade one certification on the day before practice began.

Despite the extremely compressed time frame within which it was constructed, FIA F1 race director Michael Masi always made it clear no compromises on the safety of its design and construction would occur.

“There were one or two rough edges that will be sorted out for the next race in March 2022,” he added. “Inputs from all stakeholders will be considered and the track and venue will be honed for this next event.”

Although the drivers made some criticisms of the track, they also had good things to say about it. While street circuits and tracks with freshly-laid asphalt tend to offer notoriously low grip levels, drivers were pleasantly surprised with how much purchase the virgin surface offered them from the opening sessions of the weekend. This likely contributed to how relatively infrequently drivers crashed of their own accord. There were single-car crashes, but no more than you might typically see at Monaco, Singapore or Baku.

The crash at the start of the Formula 2 feature race was ugly. No doubt the FIA will study it as painstakingly as they do all serious incidents. But it occured on the pit straight at the start of the race, and similar accidents have happened at other venues. The crash happened when a car near the front of the grid stalled and was hit by one which started near the back: An omnipresent risk in any form of motorsport that includes standing starts.

Throughout the weekend, the most obvious hazard facing the drivers was less the circuit itself and more their fellow competitors who were out on it.

The scenes of drivers hurtling past cars that were crawling along off the racing line on the exit of many of the circuit’s quick corners led to race control warning drivers not to slow down unnecessarily between the exit of turn 22 and the long left hand corner-cum-straight of turn 25. Yet, by the time the first qualifying session began, the directive appeared to simply encourage drivers to slow down just before the final corner of turn 27 instead, which led to major traffic jams in Q1.

Mazepin’s near-miss with Hamilton in third practice was undoubtedly frightening, but it was also due in large part to Mercedes failing to give their driver enough of a warning that the Haas was approaching on a fast lap. With only a slim pair of mirrors to guide them, drivers are heavily reliant on information from their engineers to know if drivers are approaching behind them and how rapidly they are approaching, so they can best gauge how they can safely clear out of the way.

This problem is by no means unique to Jeddah. Despite real-time global positioning data being available and drivers contactable through radio at all times, it nonetheless happens with some regularity, and similar incidents have happened at other circuits this year.

The stewards themselves noted the unique challenges posed by Jeddah’s layout, stating that “it is essential that teams communicate effectively and proactively with their drivers,” due to the “nature of this circuit”.

So-called ‘gentlemen’s agreements’ that are supposed to ensure drivers self-regulate ahead of qualifying laps have demonstrably failed to do so on previous occasions this season – most particularly in Bahrain and Austria. As a question of safety across all circuits, maybe it is time for more formal arrangements between competitors to help avoid these kinds of avoidable scrums.

Before the race Lando Norris’ expressed uncertainty over whether Jeddah pushed the boundaries of safe track design too far. Asked whether he was sure the track was safe enough he replied: “I don’t know – you’d say yes but something could suddenly happen and everyone’s going to be like ‘I told you so’. It’s tricky.

“If there’s going to be a crash here realistically it’s going to be a big crash especially if it’s in the faster sector of sector one or the chicane where Charles crashed. I don’t know where the line is between having a street circuit and not much run-off and then having a normal circuit. I’m not sure where the line is. For now it’s okay but something could happen and I could be wrong.”

Those fears did not materialise during the F1 race. But the fact two crashes occured which were sufficient to cause red flags should give pause for thought.

One of those, which eliminated three cars, happened after a standing restart. Race starts are always the most dangerous phase of grands prix and drivers had to contend with not one standing start, but three on Sunday. With the field bunched up far more during standing starts than rolling starts, this contributed to the contact between Perez and Leclerc at the second restart that resulted in the biggest crash of the weekend and another race stoppage.

While the standing start format for restarts is consistent with race control’s approach to restarts after red flags throughout the rest of the season, there’s an argument to be made that this method of restarting races – the decision of which is entirely at the race director’s discretion – could be used more selectively, taking into account how much room to manoeuvre is available to drivers should a melee ensue. It is at the race director’s discretion whether to use a standing or rolling restart.

Later in Sunday’s race, a significant piece of debris from one car lay off the racing line for over a minute before a Virtual Safety Car was called to allow its recovery. On a circuit as narrow as Jeddah, any debris left out on the circuit for any amount of time significantly increases the risk of accidents. A Fernando Alonso made his dissatisfaction clear over the radio: “The circuit is in the worst condition of the weekend, we’ve had 100 red flags and now we’re racing at 300kph with the circuit like this.”

Clearly, the race left drivers with the impression there is room for improvement in how races can be held safely in Jeddah. But they also had a lot of positive things to say about the challenge the circuit presented.

Masi left Saudi Arabia with the view that only minor changes were needed to the track. “There’s is some fine-tuning that will happen across the board,” said the race director.

“There’s some teething issues, being a brand-new event, brand-new facility on the whole. There’ll be some fine-tuning but nothing in a major way that I can envisage here and now.”

It’s clear several drivers have strong views what that “fine-tuning” should involve, particularly when it comes to the sight lines around Jeddah’s many fast corners. With its next F1 race just over three months away, they will no doubt take a keen interest in which areas are addressed.

37 comments on “Analysis: Is Jeddah circuit’s layout fit for F1 or a “recipe for disaster”?”