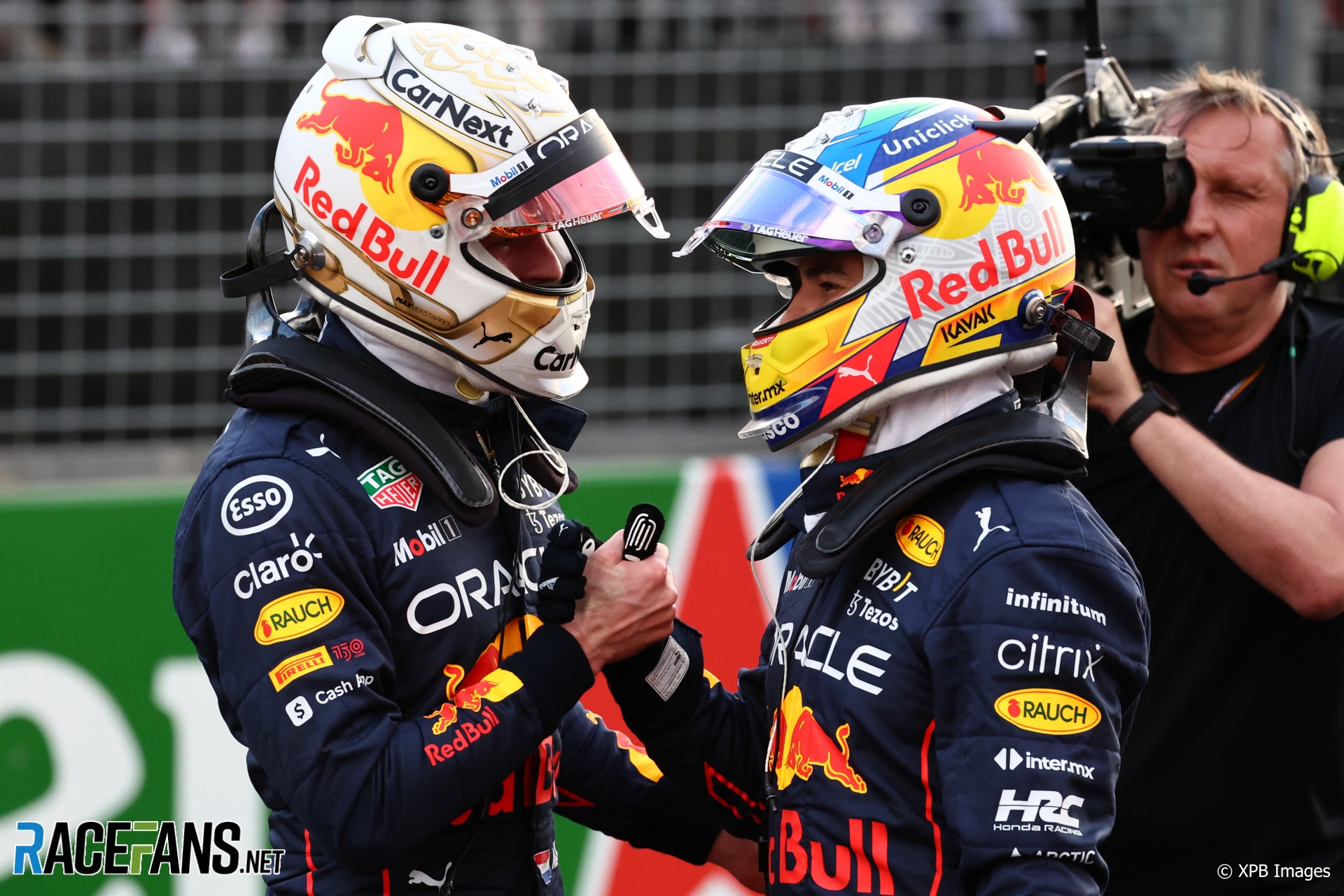 In the round-up: Max Verstappen believes team mate Sergio Perez is showing stronger results due to being more comfortable with this year’s Red Bull car.

Max Verstappen says that Sergio Perez seems much more comfortable in the team’s 2022 car than he was in 2021.

“I think it helps, of course, to have a year with the team,” explained Verstappen. “And I think, of course, with the new rule changes, everyone had to start from zero really.

“It seems like he is a lot happier in the car, so that’s really good for the team,” Verstappen continued.

No Haas upgrade for “four or five races”

Haas team principal Günther Steiner said that the team has decided against bringing upgrades to this weekend’s race, as many other teams are, in favour of trying to understand their current car’s performance better.

“We have decided to wait a little bit longer with upgrades as I still think we have performance in the car without them which we have to get on the track,” he said. “Sometimes we achieve it, sometimes we don’t.

“We have a good upgrades package in about four or five races coming, so I’m confident about that and what the other ones are bringing, as of right now I don’t know, but I will know a lot more next Monday.”

Gasly had floor damage before Alonso contact in Miami

Pierre Gasly had suffered damage to the floor of his AlphaTauri during the Miami Grand Prix before his collision with Fernando Alonso.

“The race was difficult because, from very early on, I had a big hole in the floor, losing quite a bit of downforce, but even so I could fight for seventh or eighth place with the Alpines, which was encouraging,” Gasly said. However, the lap 39 contact with Alonso was when his race unravelled, as he collided with McLaren driver Lando Norris shortly afterwards.

“It was going quite well in fact, until my contact with Fernando,” Gasly continued. “That ruined my race, and it was very disappointing, as we’d had a solid weekend up to that point. We deserved some points, so it was a shame, but the performance is clearly there and there’s no reason why we can’t have some good results in the upcoming races.”

That’s a lot of wins and championships right there. #Indy500 pic.twitter.com/M8KWOfD36H

It’s hot/cold tub season @IMS. Inspired by @tomasscheckter many years ago. Getting our minds and bodies right. Going to be a great month. #indy500 pic.twitter.com/oaEJALSdgi

Column: Herta’s profile elevated as he rolls into Indy 500 (AP)

Now he’s the star driver at Andretti Autosport seeking a career-changing Indy 500 victory. F1 has gained massive traction in North America and American companies have been lining up to join the action. '

Red Bull, stocks and losing all his race gear: getting to know the real Jüri Vips (Formula 2)

Vips: 'So there were some banana peels and bottles and stuff on top of it and they were probably like ‘ok, it’s a trash can,’ so they took it out and threw it away. Then I thought to myself a couple days later, ‘where’s all my racing kit, what did I do with it?'

Lamborghini Squadra Corse is developing its first LMDh prototype. The car will make its debut in 2024 and will compete in both the FIA World Endurance Championship’s Hypercar class and IMSA SportsCar Championship’s GTP class

Pizzi: 'I didn’t really pick one kind of design, I was just choosing to go with an aggressive line, more sharp turns, like this. The project at the start was to make this one chrome but we didn’t have it on time, so I chose white to put on top.'

After the FIA’s new race direction team was established in F1 in 2022, Ciaran says that it’s good to see Niels Wittich and Eduardo Freitas in a more anonymous role and able to focus on the job’s requirements more than its dramatic spectacle:

Communication and implementation of the rules are significantly improved so far this year. Most fans will have no idea who Wittich and Freitas are, and the longer it stays that way, the better.

I’d be curious to see if teams start to complain less, as Alpine did for Alonso’s penalty, once they see the fruitlessness of it. Old habits die hard, and if the championship battle flares up, I suspect Red Bull in particular will be vocal when it suits them. Fingers crossed that the race directors don’t yield to whatever pressure they might get put under.
@ciaran