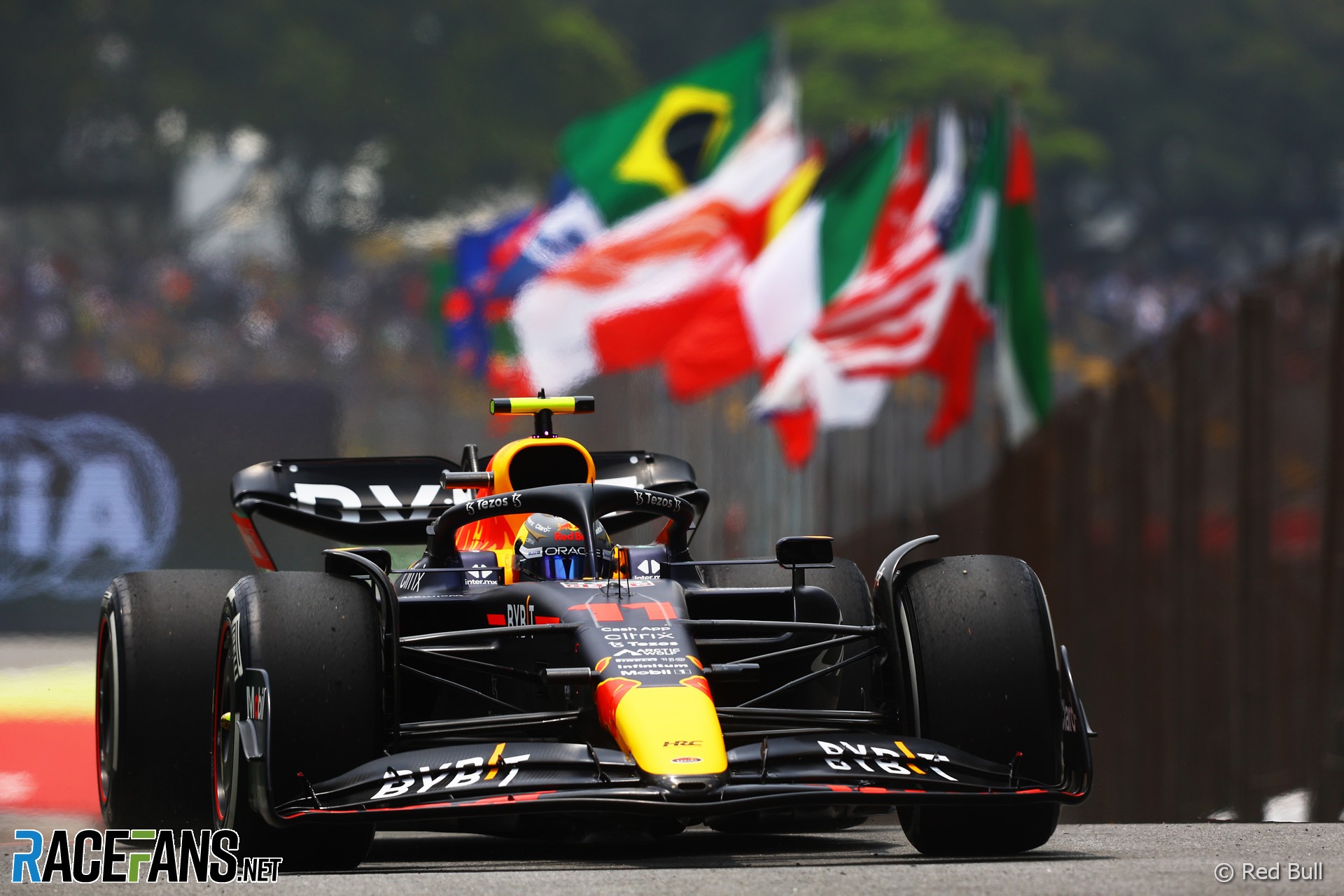 Sergio Perez headed an extremely close opening practice session at the Interlagos circuit and heads into qualifying for the Brazilian Grand Prix four-thousandths of a second quicker than Charles Leclerc.

Perez’s best time of a 1’11.853 on soft tyres was just 0.004s faster than Leclerc, who himself was only 0.004s quicker than the second Red Bull of Max Verstappen. Carlos Sainz Jnr was fourth fastest, ahead of the two Mercedes of Lewis Hamilton and George Russell.

It was a humid and overcast start to the weekend with clouds handing over the Interlagos circuit. However the track was still warm, with air temperatures in the mid 20 degrees and the track approaching 50C.

With just a single hour session before cars were locked under parc ferme conditions for the rest of the weekend, teams had to make the most of the limited track time available. Only the two Aston Martins drivers of Lance Stroll and Sebastian Vettel did not join the rest of the field by taking to the track in the early minutes, opting to remain in the garage for the initial rush.

The two Red Bulls set the early pace on the hard compound tyres, with world champion Verstappen setting the early benchmark time with a 1’13.646, despite complaining of understeer on his car, a tenth-and-a-half quicker than team mate Perez. Valtteri Bottas put his Alfa Romeo second quickest but, unlike the Red Bulls, was running on the medium compound.

Around 20 minutes into a session, the track fell quiet as drivers returned to the pits to make set up adjustments while they still had the opportunity. Red Bull sent out Perez for a run on soft tyres and he blitzed his team mate’s best time at his first attempt, jumping to the top of the times with a 1’11.853 – nearly two seconds quicker than anyone else.

Stroll’s session appeared to be under threat of ending early when he reported a problem on his Aston Martin. With his team spotting cause for concern over the radio, Stroll was called back into the pits. Fortunately, he rejoined the session soon after without losing much time.

Mercedes were the next to take to the track on the soft tyres, but Hamilton ruined his first flying lap attempt by running wide under braking for turn eight. Leclerc was fastest of all over the first two sectors on his soft tyres, but lost his advantage over the long uphill straight which comprises the final sector to move into second, exactly four-thousandths of a second between the two Red Bulls.

That was the way it remained at the top until the chequered flag signalled the end of the session, with Perez heading into qualifying as the fastest driver. Sainz was fourth-fastest in the second Ferrari, with the two Mercedes fifth and sixth, around two tenths slower than Perez.

Vettel was seventh in the Aston Martin, ahead of Mick Schumacher’s Haas in eighth. Bottas and Pierre Gasly completed the top 10 at the end of the session, which ran without a single yellow flag incident or stoppage.