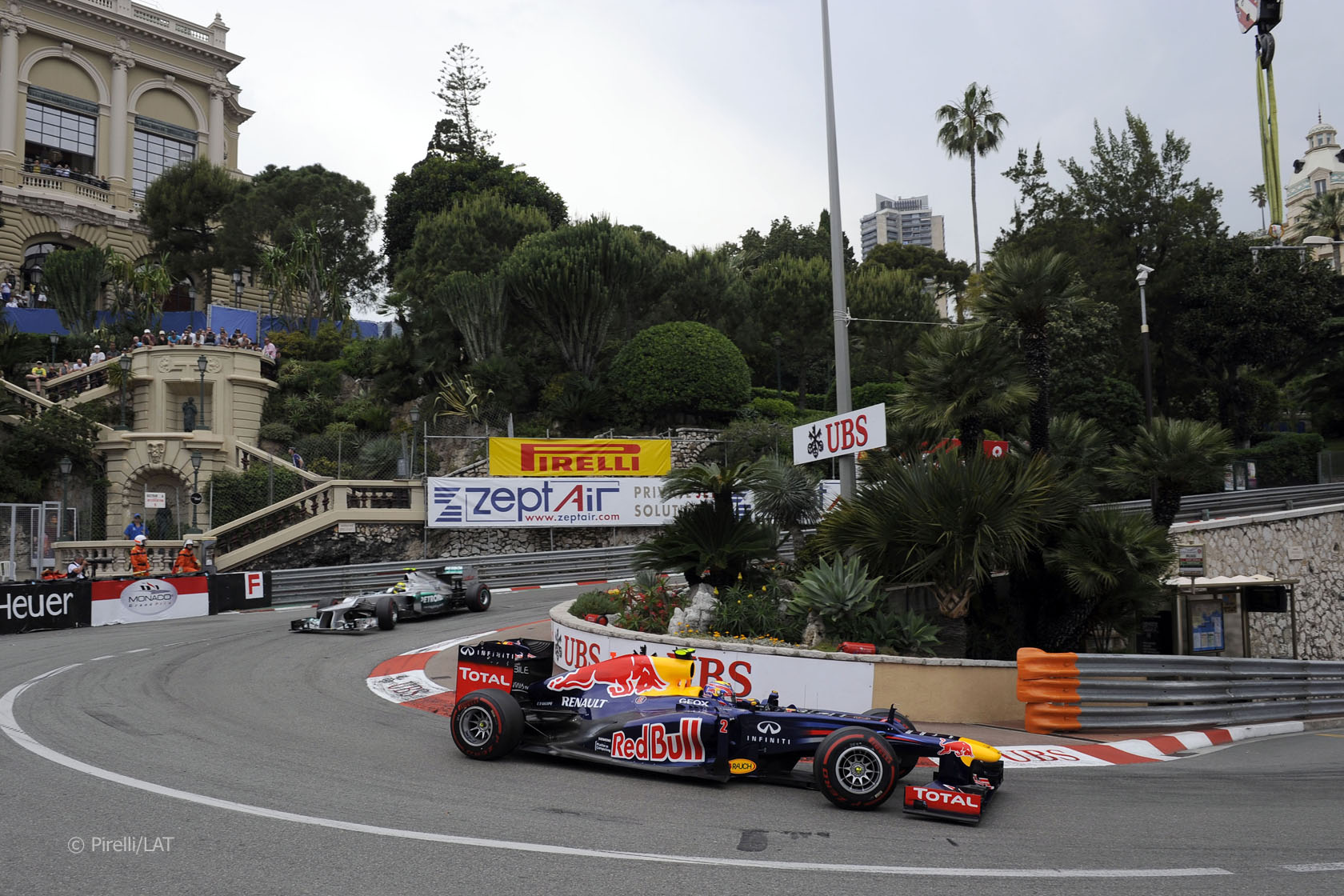 Mercedes suspected Red Bull would use Mark Webber to slow the field in Monaco and help Sebastian Vettel – but the race data indicates they didn’t.

The chaos which broke out at the first corner on lap one affected more than just the drivers whose races it ended. Jean-Eric Vergne was unhappy about the number of drivers who cut the first corner and gained places, saying afterwards: “After the start, lots of cars in front of me cut the corner at the first turn and I found myself behind the Marussia and I was losing a lot of time.”

Later Vergne was told to give a position back to Sergio Perez after cutting the chicane – his response was to question why those who cut turn one hadn’t been punished.

The stewards did investigate the incident but decided to take no action. Looking at the replays, it’s not hard to see why. Sebastian Vettel, for example, had no option other than to cut across the apron, faced with Romain Grosjean’s Lotus spinning in front of him. It gained him a place over Kimi Raikkonen.

The field bunched up, slowing to avoid the carnage, and Pastor Maldonado piled into the back of Pedro de la Rosa. Those who cut the corner were trying to avoid doing the same. It’s harsh on those who stuck to the track and lost out, but the rules can’t account for every eventuality and this is probably one of them.

The teams’ reluctance to pit at Monaco was down to more than just the usual concern about becoming stuck behind slower cars, unable to pass. For much of the race the strategists were operating under the expectation that rain was about to arrive.

No-one wants to pit for fresh slicks only to return to the pits two laps later for intermediates, so the drivers were told to sit tight and nurse their rubber. “We are expecting some light rain during the race,” di Resta was told, “and we’re looking to extend the stint to that point”.

Raikkonen did some quick sectors early in the race but was stuck in traffic. He reported to his team that he was quicker than the other cars, and was told to look after his tyres.

The message didn’t have the desired effect. As lap 22 on the chart shows, he began to drop back rapidly from the leaders, struggling with his tyres.

That opened a window of opportunity for Nico Rosberg. Once Mercedes were happy they could bring him in with no risk of falling behind Raikkonen, they scrambled, and tried to get the undercut on Webber. It didn’t work, but it was probably his best chance of getting ahead. One driver who didn’t pit until later was Vettel, who’d started on softs instead of super-softs, and stayed out until lap 46. After the race he said on his team radio, “with hindsight we should have stayed out a bit longer”.

This is a classic example of a driver not having all the information that is available to those running his strategy. Vettel believed he could have made his soft tyres last longer in the first stint, allowing him to be more aggressive on the super-softs at the end of the race.

But his team were better-placed to judge the consequences of delaying his pit stop any later. As lap 45 on the chart above shows, he had just lost 0.6 seconds to Webber and his pursuers. Had they not brought him out on that lap he would not come out in front of Hamilton.

This is one of two points which refute Mercedes’ suggestion that Red Bull were using Webber to hold up the pack to help Vettel. Furthermore, the gap between Webber and Rosberg was not low enough at this point to suggest Webber was holding him up – unlike, for example, the last laps before Rosberg’s pit stop, or the final 15 laps of the race.