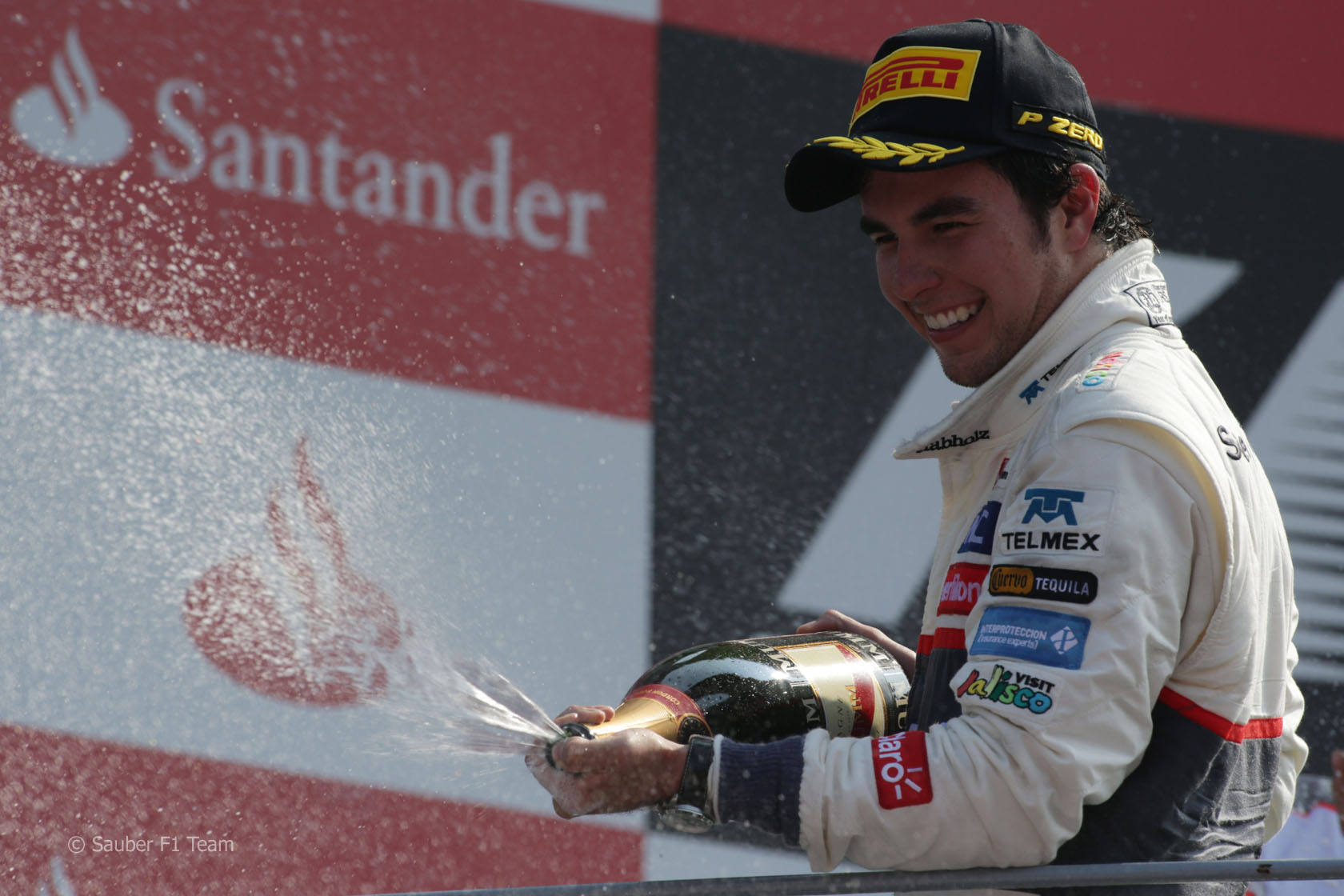 Sergio Perez was voted Driver of the Weekend for the second time this year for his impressive performance in the Italian Grand Prix.

He started 12th and raced through the field to finish second in a performance reminiscent of his double 14th-to-first drives in F3 at the track four years ago.

Perez was out-qualified by his team mate and did not make it into Q3. That allowed him to start the race on the hard tyres and he made superb use of that strategy to scorch through the field, passing, among others, both Ferraris.

But it seems even this was not enough to win over Ferrari president Luca di Montezemolo. Following the race he reiterated his view that Perez, in his second season of F1, is not experienced enough to drive for Ferrari.

Perez for me. He was on it from the word go with his race and used the C31?ů‘ťľ??s strengths to its full potential.

I had my doubts after qualifying as they weren?ů‘ťľ‘šůt as high in the speed trap as I expected they would be but he delivered and Kobayashi also stuck them in the points.

Admittedly he wasn?ů‘ťľ‘šůt really making waves in qualifying but harking back to that speed trap data again makes me think that perhaps that was the intention, knowing they could benefit from high temperatures on tyres they could charm into working for them.
@AndrewTanner

The fact that Perez didn?ů‘ťľ‘šůt get into Q3 allowed him to have a different tyre strategy in the race to most of the other drivers which helped him in the race, if he had reached Q3 and qualified in a similar position to his team mate I don?ů‘ťľ‘šůt think he would have had quite as good a race which shows the problems with the tyre rules regarding the top ten.

But he still put in a great performance in the race to achieve another podium I don?ů‘ťľ‘šůt think most fans would be surprised if he managed a victory before the end of the season.
@PJA

I?ů‘ťľ‘šůve never bought into the story that Perez wasn?ů‘ťľ‘šůt ready for Ferrari and now I?ů‘ťľ‘šůve sussed it.

We saw today that Ferrari need someone like Massa who won?ů‘ťľ‘šůt take points away from Alonso, Alonso can win the title on his own. Perez has proved his year that he?ů‘ťľ‘šůs an absolute superstar, he is world championship-winning material but he can?ů‘ťľ‘šůt get into Ferrari until Alonso has won a title. Hamilton put the tribulations of Spa behind him and drowned out speculation over his future with a classy drive to victory from pole position.

I picked Hamilton as he was one of the few who did a solid job all weekend. He did the job he needed to do in the first half of the race by pulling away from the rest of the field, and because of that, Perez didn?ů‘ťľ‘šůt have enough laps to catch him.
@Slr

Hamilton drove superbly throughout the weekend and ran a flawless race. We don?ů‘ťľ‘šůt know how much he had in reserve, but my guess is he?ů‘ťľ‘šůd have easily held off Perez if he?ů‘ťľ‘šůd got closer. We didn?ů‘ťľ‘šůt see much of him because the focus was on the battles behind, but he didn?ů‘ťľ‘šůt seem to put a foot wrong.
@F1antics

Without a doubt it must be Lewis Hamilton. Fantastic qualifying and fantastic race. Didn?ů‘ťľ‘šůt see much of him in the race and this shows how dominant he was.

Driver of the race must have been Sergio Perez but he was out-qualified by quite a large margin by Kobayashi so I?ů‘ťľ‘šům afraid I can?ů‘ťľ‘šůt vote for him as driver of the weekend.
@Smifaye There were echoes of Alonso’s 2006 Monza weekend – technical problems in qualifying led to him starting tenth, from where he mounted an excellent recovery drive.

The difference was this time it did not end in retirement, but a podium finish. Though Alonso could offer little resistance to Perez, nor did Massa make life particularly difficult for his team mate.

The world championship leader ended a difficult weekend with an increased points advantage.

Although Perez?ů‘ťľ‘šůs drive was outstanding I voted for Fernando Alonso. The sole reason being he made good progress through the field and although he couldn?ů‘ťľ‘šůt stop Perez passing him and couldn?ů‘ťľ‘šůt keep up with Hamilton I just felt that he did very well given the fact he has had many a problem during the weekend and the loss of telemetry bugs that plagued them.

Also since the team said that he picked up damage from the Vettel incident and couldn?ů‘ťľ‘šůt ride the kerbs made the drive from tenth to third even more impressive.
@Rdpunk

Made a good start and stayed out of trouble, and passing two cars in two corners without any need for DRS was brilliant.

Off the back of the non finish at Spa it would have been easy for him to be conservative or to be slightly flustered from the scary accident, but he went for his moves with conviction and to recover to the podium from a poor grid slot is the kind of drive we?ů‘ťľ‘šůve come to expect from him so often that it doesn?ů‘ťľ‘šůt really seem special any more!
@Dan-Thorn

The penalty handed down to Sebastian Vettel after Fernando Alonso was pushed wide at the exit of Curva Grande provoked considerable debate.

Vettel’s penalty was largely down to the rules clarification issued in July which stated that drivers may use the full width of the track to defend their position on a straight and before any braking area.

Although Curva Grande is not a straight, it seems the FIA consider it as if it were one because it is an acceleration zone – a distinction which it will be important to keep an eye on in future rulings involving incidents which take place in flat-out corners.

This was the fourth time this year Perez has featured among the top three Drivers of the Weekend.

Hamilton made his fifth appearance and Alonso an impressive eighth.