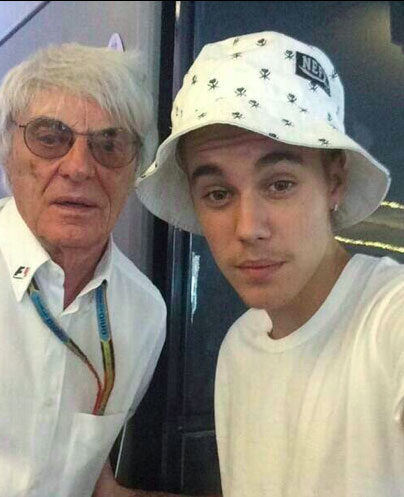 No prizes for guessing the main topic of discussion on social media on the Saturday of the Monaco Grand Prix weekend. It was, of course, whether or not Nico Rosberg had deliberately tried to bring the yellow flags out to win the race.

Meanwhile one particularly famous fan got to meet the man who runs the sport – but not his favourite driver.

Here are the Twitter highlights of an eventful day in Monte-Carlo.

So it’s the start of a very important day in M/C, qualifying takes precedence over all else here. Race pace secondary to that all out Q lap.

The F1 drivers all dressed up at the @AmberLoungeLtd show last night. Some look a little cooler than others… pic.twitter.com/ZPIx7Z1lOP

Rosberg slows down a lot for Sainte Devote and takes care getting around Ericsson’s recovering Caterham. #F1 pic.twitter.com/5CGz5fMbIo

A heart-in-mouth moment for Bottas who catches a slide in the middle of Massenet. #F1 pic.twitter.com/JisBlfT3tI

Daniel Ricciardo split the Mercedes cars in the final practice session. But he wouldn’t be able to mount a proper challenge come qualifying.

Come on @danielricciardo – get in the fight for pole !

You can get quite close to the cars here. This is the apex of Tabac pic.twitter.com/csHAyWlTqp

Having lost Sir Jack Brabham, it's worth noting that a Brabham chassis first started from pole 50 years ago today (Dan Gurney, NED 64) #F1

Massa was letting Ericsson through at Mirabeau but the Caterham hit him. #F1 pic.twitter.com/aMfV5EMxZX

So, Lewis or Nico? Or anyone else, indeed …. pole for #MonacoGP

Rosberg off at Mirabeau! On provisional pole but his session is over. #F1

Inevitably there will be accusations Rosberg ‘pulled a Schumacher’ (2006) but at first glance it looked like a genuine error. #F1

Mind you there were some odd steering movements from Rosberg on the way in. Wonder if the stewards will at least take a look? #F1

After qualifying, talk was dominated by Rosberg’s Mirabeau mistake. The stewards later ruled he did not go off deliberately in order to ensure himself pole position.

Raikkonen: "I am not here to judge anybody & say what was true & what was not. He knows himself. It is hard to say was it a mistake or not"

That’s a pretty hollow triumph but Rosberg seems to celebrating it like its a world title. Lewis looks livid. #f1

Would love to see the data overlay from Rosberg’s pole lap to his Mirabeau overshoot. That’s your smoking gun – if there indeed is one. #F1

V difficult not to be reminded of ’07 with all this & whilst it makes a great story from the outside, it’s not pleasant inside the garage.

I wonder, without the 2006 qualifying ‘incident’, would there be so much suspicion around Rosberg’s error? Still, fascinating #F1

The irony of Briatore being asked about potential underhand tactics looks lost on Sky Sports F1.

Oh dear. The credibility of #SkyTV just dropped as they drag Flavio Briatore on screen to talk about cheating. I mean, really? #Irony

Flavio on whether that was an act of sportsmanship – you couldn't make this up.

HAM will be miffed unless ROS penalised. ROS miffed if he is. Is this the beginning of the end at Merc? #nowinsituation #F1

Nico running to the stewards office after bring summoned for what happened at Mirabeau #skyf1 #ssn pic.twitter.com/nWGsPkQ2xF

When Schumacher committed a Monaco qualifying foul in ’06, Nico’s father Keke described him as ‘a cheat who should be banned.’ #SkyF1

Rob Smedley: Felipe had an unlucky session with the incident with Ericsson and we didn’t quite have the pace in Valtteri’s car #MonacoGP

So an absolutely crazy day in Monaco draws to a close. Nico is cleared, but Lewis is clearly hurt. Body language and comments spoke volumes

Enjoying the Monaco GP in a different way this year, but seriously missing the commitment needed to put a lap together in Qualy. #monacogp

Funniest thing I heard today – Justin Bieber had a selfie with Bernie Ecclestone, and wanted to see Alonso, but the Spaniard was too busy.

Bernie is a Belieber. pic.twitter.com/C5rvzbfJzY"

While all the Merc stuff was going on, @alo_oficial put in a beautiful, beautiful lap…