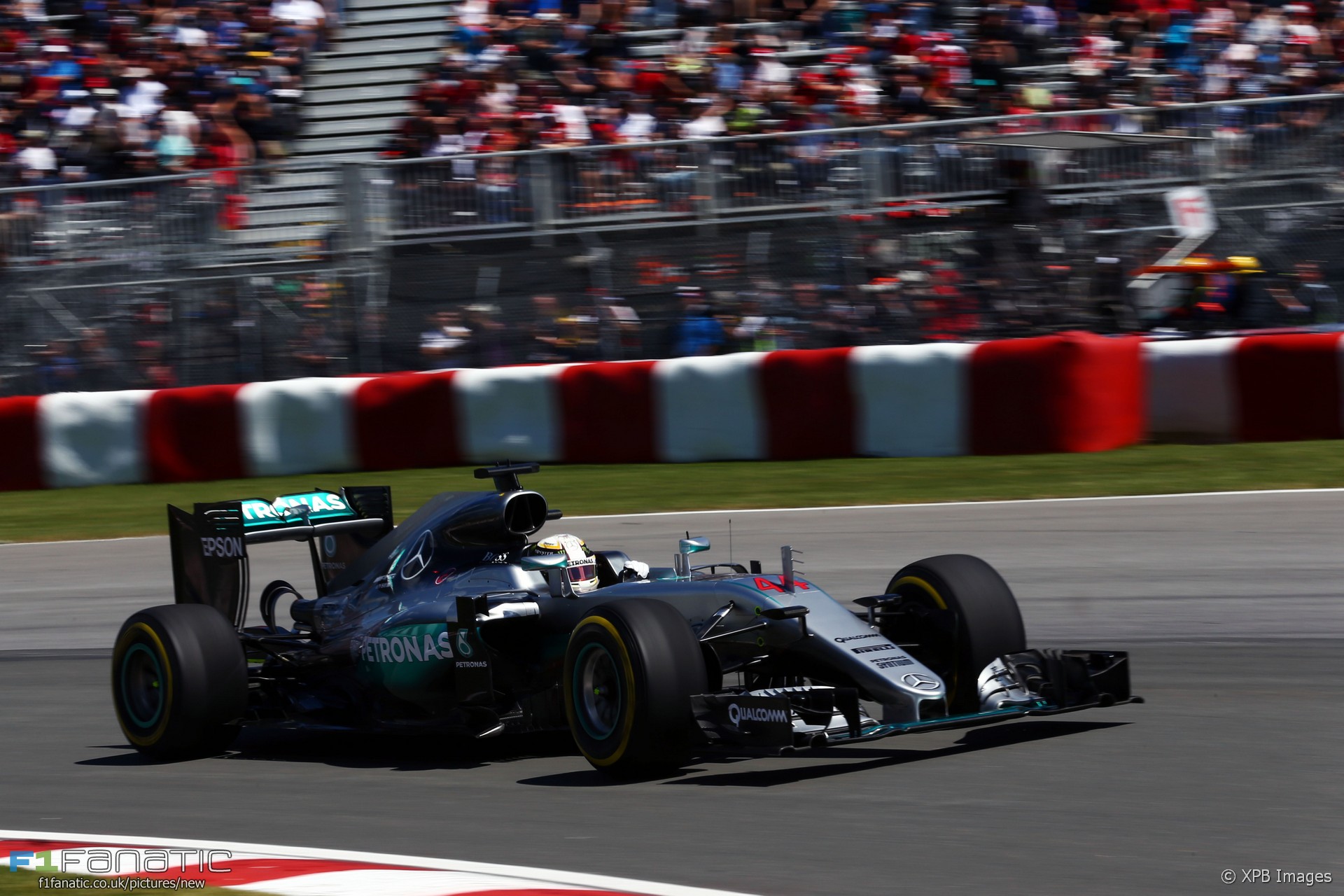 Lewis Hamilton took pole position for the Canadian Grand Prix for the fifth time in his career.

His Mercedes team mate Nico Rosberg ran him close for much of the session but an error at the beginning of his final qualifying lap assured Hamilton his fourth pole of the season.

Sebastian Vettel took third for Ferrari, coming within two-tenths of a second of the silver cars.

With skies darkening as qualifying began the top drivers wasted no time in hitting the track to get their banker laps in. With a fresh set of ultra-soft tyres Rosberg lowered the quickest time of the weekend so far to a 1’13.714.

The Mercedes driver complained about being “blocked” by Sebastian Vettel on his first run. The Ferrari set the second-fastest time and Daniel Ricciardo made it three different cars in the top three in his Red Bull.

The first drops of rain began to fall halfway through the session and at first it seemed to be well-timed for Manor. Pascal Wehrlein’s first lap had been good enough for 14th initially, and had the rain intensified more quickly he might have grabbed a spot in Q2.

However the drizzle was slow to intensify, and as both Haas drivers and Daniil Kvyat improved their times Wehrlein slipped into the bottom six. When team mate Rio Haryanto hit the turn four barrier and limped slowly back to the pits, the subsequent yellow flags guaranteed no further improvements from anyone.

Among those to be eliminated were Kevin Magnussen, who was unable to participate following his crash in final practice. Team mate Jolyon Palmer skimmed the Wall of Champions and narrowly missed the cut, while both Saubers also progressed no further.

The walls of Montreal claimed their second victim a few minutes after Q2 began. Carlos Sainz Jnr’s Toro Rosso stepped out of line at the exit of the final chicane, the right-rear clipped the Wall of Champions and pivoted the car into the barrier. Sainz climbed out of his car uninjured, but would take no further part in the session.

Once the session resumed the Mercedes drivers wasted no time in showing their hand. Hamilton got dangerously close to the wall which claimed Sazin as he set a new benchmark of 1’13.076. But Rosberg ran him close, falling short by just 18 thousandths of a second.

Behind them the competition for the final place in Q3 was fierce. Sergio Perez seemed to be secure with a late lap or ninth place but Fernando Alonso claimed a place in Q3 for McLaren and the final blow was struck by Perez’s own team mate: Nico Hulkenberg took his place in the final ten at the expense of the other VJM09 driver. Perez missed the cut by just five hundredths of a second.

Monaco pole sitter Ricciardo led the drivers out as the final phase of qualifying began but he didn’t play a part in the fight for the front row this time – that was conducted entirely between the two Mercedes drivers.

Once again an attacking effort from Hamilton was all-but matched by Rosberg, who was quicker than his team mate through the middle of the lap. Hamilton set a 1’12.812, but Rosberg was a mere six-hundredths of a second behind.

The scene was set for a dramatic end to Q3. But as Rosberg began his final lap a small mistake at turn one ended his bid for pole position. Hamilton failed to improve on his last run as well.

The pair were nearly caught out by a sudden improvement from Sebastian Vettel. The Ferrari driver hadn’t been close to the silver cars earlier in the session, but his last lap left him just 0.178s adrift.

Ricciardo clouted the Wall of Champions on his way to fourth place, three-tenths off the Mercedes. Max Verstappen backed him up in fifth with Kimi Raikkonen over half a second slower than the other Ferrari.