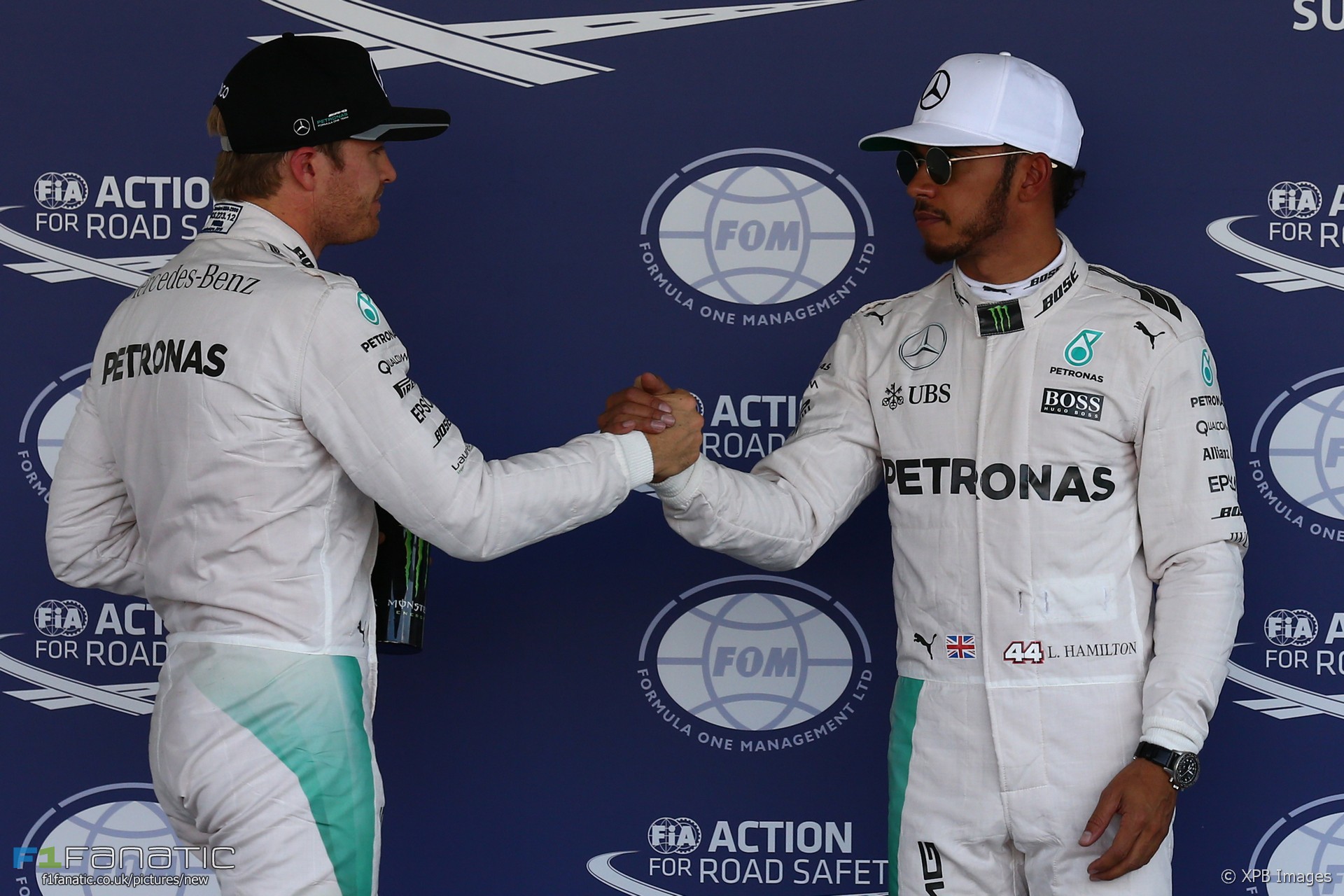 Lewis Hamilton took his tenth pole position of the season in qualifying for the Mexican Grand Prix, with championship leader Nico Rosberg lining up on the front row behind him.

The two Red Bulls of Max Verstappen and Daniel Ricciardo locked out the second row of the grid, while Nico Hulkenberg will line up his Force India fifth ahead of the two Ferraris.

Hamilton took pole with his first effort in Q3 having only just failed to improve his time on his final run.

Jolyon Palmer’s qualifying was over before it had even begun after the Renault driver was found to have a cracked chassis after running over a kerb in final practice.

This left only five drivers to be eliminated from the first session of qualifying and opening an opportunity for one of the traditional backmarkers to survive to Q2.

With rising track temperatures, all drivers ventured out on super soft tyres to ensure they would not be caught out. But with drivers still struggling to get heat in their tyres, many opted to push on their third lap out from the pits.

As time ticked down, it was the Haas drivers of Romain Grosjean and Esteban Gutierrez who found themselves needing a marked improvement to make it out of the first session.

But Grosjean’s attempt to improve on the slowest time was ruined when his team mate spun directly in front of him in the fast sweepers of the middle sector, scuppering both Haas cars’ chances of improving.

This proved an open goal for Pascal Wherlein and Marcus Ericsson, who both took advantage of the Haas’s misfortune to make it through by improving on their final laps, as did Kevin Magnussen in the Renault.

This left both Haas cars eliminated, along with Daniil Kvyat, who was stranded in the pitlane, Felipe Nasr’s Sauber and Esteban Ocon in the second Manor.

Having used up a set of super soft tyres in Q1, the two Mercedes opted to try and make it into the final shootout on the soft compound, as did Sebastian Vettel.

Max Verstappen chose to remain on the super soft tyres and used them to good effect to set a 1’18.972 – the quickest lap of the weekend so far.

With Red Bull, Mercedes and Ferrari all opting not to run again in the closing stages, Williams were relying on a last lap improvement to survive through to Q3.

Both Felipe Massa and Valtteri Bottas were able to get themselves out of the danger zone on their final laps, which pushed their Force India rivals into it as a result.

Nico Hulkenberg managed to escape with a brilliant effort to go sixth quickest, but local hero Sergio Perez was unable to improve and was out in 12th.

Jenson Button also failed to make it through, while team mate Fernando Alonso was beaten to the final Q3 slot by Carlos Sainz Jnr in the Toro Rosso.

Also eliminate was Kevin Magnussen, who qualified 14th, with Ericsson’s Sauber and Wehrlein’s Manor behind him.

The final shootout for looked set to be another battle between the Mercedes team mates with Red Bull snapping at their heels, ready to take advantage should the Silver Arrows falter.

Lewis Hamilton take provisional pole after the first flying laps with a 1’18.704, but championship rival Nico Rosberg could only manage fourth fastest behind the two Red Bulls of Verstappen and Ricciardo.

The Red Bulls were the first out for the final laps of the session, but while both Verstappen and Ricciardo improved their times, neither improved position.

Lewis Hamilton also failed to beat his previous time, leaving the door open for Rosberg to capitalise. Rosberg’s final attempt was not good enough to beat his rival, but it did prove enough to jump the Red Bulls into second to make it another all-Mercedes front row.

Nico Hulkenberg stunned the Ferraris but taking fifth position on the grid ahead of Raikkonen and Vettel. Valtteri Bottas took eighth, followed by his team mate Felipe Massa and Carlos Sainz Jnr rounding out the top ten.

But it was Lewis Hamilton who took his tenth pole of the season and the 59th of his career for tomorrow’s Mexican Grand Prix.

58 comments on “Hamilton on pole, Rosberg second in Mexico”