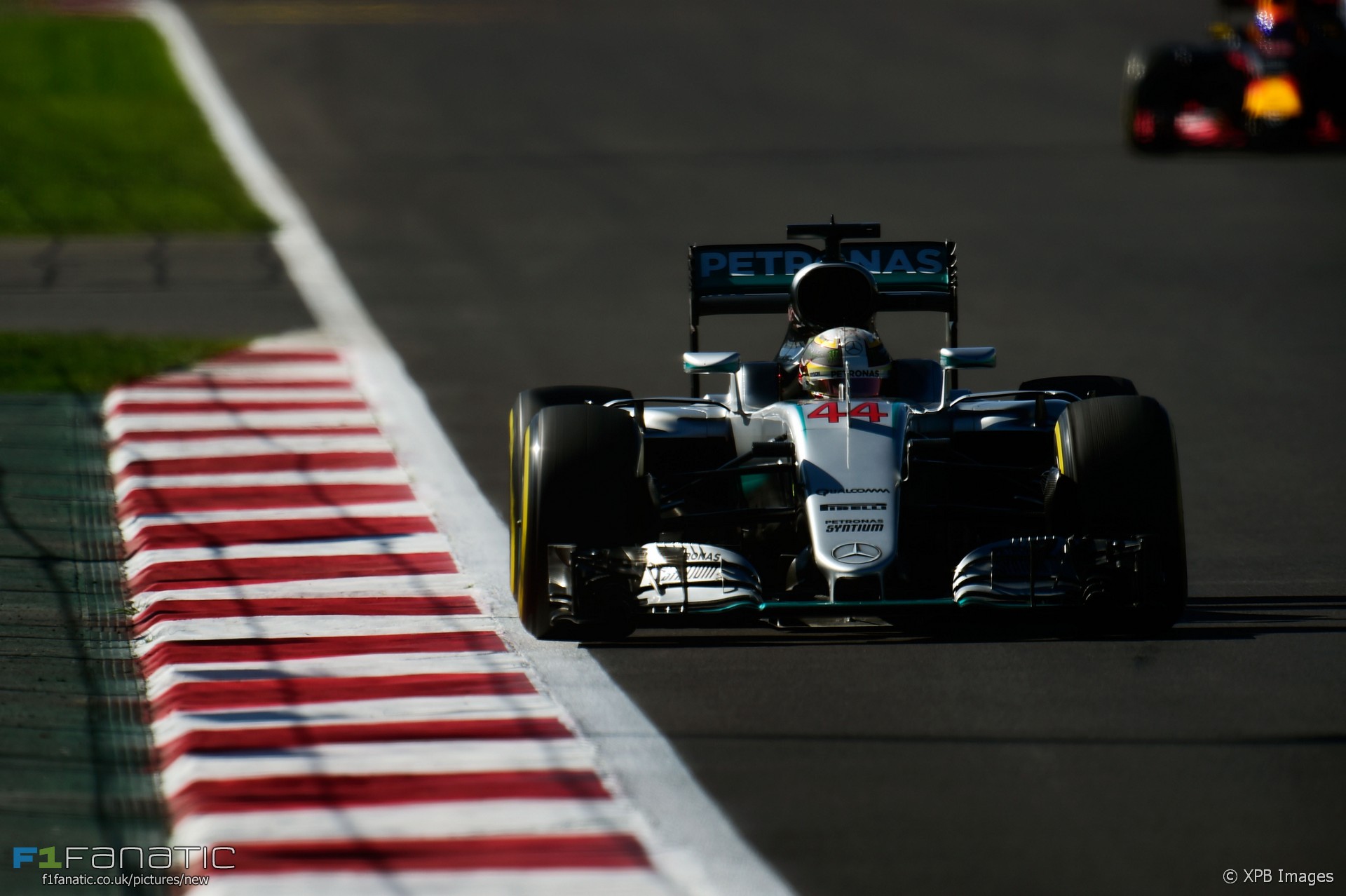 Lewis Hamilton won the Mexican Grand Prix after a measured drive from pole ahead of rival Nico Rosberg and Sebastian Vettel third.

Despite a scare at the first turn, Hamilton’s victory never looked in doubt throughout the 71 lap race who took the chequered flag almost ten seconds ahead of his team mate.

There was an intense battle for third between Verstappen, Sebastian Vettel and Daniel Ricciardo, with Verstappen given a post-race penalty just minutes before the podium ceremony after a dramatic late incident.

As the lights went out, the two Mercedes got off the line well with Hamilton leading on the run to turn one with Verstappen challenging Rosberg for second.

Hamilton locked up and ran wide, completely missing the first chicane, while Verstappen and Rosberg made wheel-to-wheel contact at the apex of Turn One, with Rosberg running through the inside of Turn Two and regaining position.

Back in the pack, Esteban Gutierrez made contact with Marcus Ericsson into Turn Two, sending the Sauber into Pascal Wehrlein’s Manor and putting the German into the barriers and out on the spot.

The Safety Car was deployed and Red Bull immediately pitted Ricciardo for mediums. The race resumed on lap four, with Hamilton leading from Rosberg, Verstappen and Hulkenberg.

Hamilton was the first to make his one and only stop for mediums on lap 17, with Rosberg pitting a handful of laps later, resuming behind his team mate in third as Vettel assumed the lead of the race.

Vettel eventually rescinded the lead by making his single stop on lap 32, rejoining sixth behind fellow Ferrari driver Raikkonen. This left Hamilton, Rosberg and Verstappen back at the front of the field.

After a lull in the action with drivers pacing themselves on their final stints, Ferrari opted to bring Raikkonen in again for mediums.

Verstappen used traffic to pressure Rosberg for second and made a late lunge under braking for Turn Four on lap 49, but locked up and ran wide as a result, allowing Rosberg back through.

Ricciardo then pitted for fresh soft tyres, resuming in sixth and quickly dispatching Nico Hulkenberg’s Force India for fifth and setting the fastest lap of the race.

Both Vettel and Ricciardo used the advantage of having fresher tyres than the leaders to good effect, with Vettel reeling in Verstappen while Ricciardo hunted down the pair of them with his soft tyres.

Vettel pressured Verstappen and caused the Red Bull driver to lock up under braking for Turn One and miss the chicane. Verstappen held onto the position, to the fury of Vettel.

Ricciardo then attempted a move on Vettel into Turn Four and Vettel appeared to squeeze the Red Bull under braking, with the two making minor contact and retaining position.

Hamilton ticked off the laps to take his first win at Mexico and to cut the championship lead of his team mate to 19 points.

Verstappen crossed the line in third ahead of a livid Vettel, but in the pre-podium green room, was informed that he had been given a five second-grid penalty for gaining an unfair advantage, dropping him to fifth and promoting Vettel onto the podium.

Ricciardo then took fourth, with Verstappen classified fifth and Raikkonen sixth. Hulkenberg finished seventh despite a late spin after being passed by Raikkonen, with Valtteri Bottas, Felipe Massa and Sergio Perez rounding out the points.

71 comments on “Hamilton wins Mexican Grand Prix ahead of Rosberg”