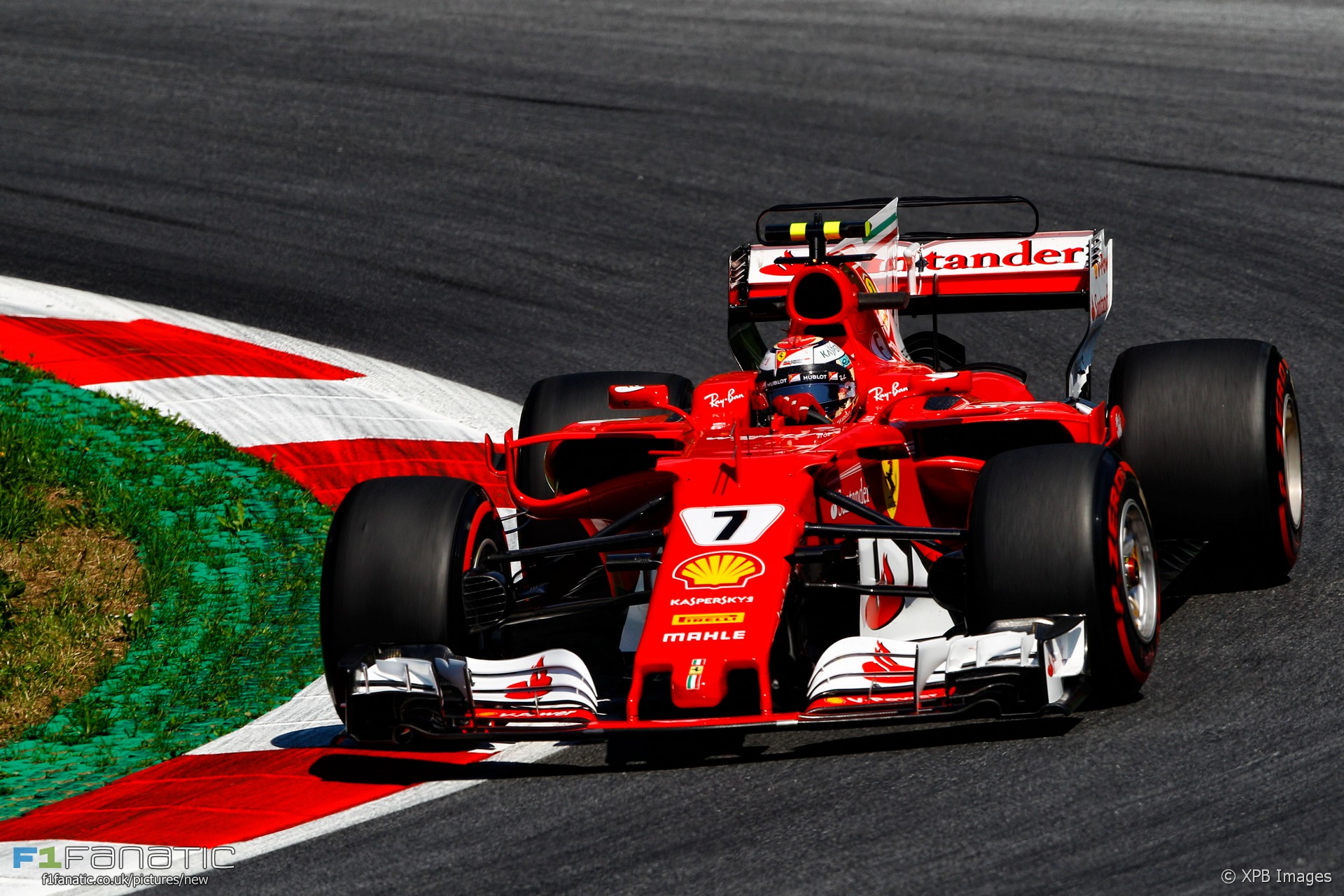 Several drivers went off during the first two practice sessions in Austria prompting some complaints and concerns on the radios. Here’s what they had to say.

As in Baku, teams took advantage of the long straights on the Red Bull Ring to perform aerodynamic tests in practice.

To Sainz: “You have five cars ahead, two behind. First constant speed will be 270, seventh gear. Constant speed five.”

To Verstappen: “Just look out for some debris on the main straight up to turn three as you exit the pit lane.”

Alonso: “Bite point find only and drive right out. Stay right of the white line.”

To Sainz: “Stay out for acceleration turn one. No cars behind. We are safe.”
To Sainz: “OK we will box this lap. Take your margin for the lap.”

Kimi Raikkonen spun his Ferrari at turn one and his team mate did the same shortly afterwards.

Raikkonen: “Yeah my tyres are done, so…”

Vettel: “Just let me know when the track’s clear please.”
“After Ricciardo you can go. Go now.”
Vettel: “OK no damage just a spin. I clipped the inside kerb and lost the rear. Nothing to worry about.”

To Hamilton: “Currently P1. Valtteri was a 1’07.6. You were purple sector one and two. Yellow exit turn one. Looks like Vettel stopped.”

Another drivers exploring the run-off was Max Verstappen, who made it as far as the barrier at turn seven.

To Vandoorne: “OK Stoffel given we didn’t do the best thing with the tyres there that is a pretty decent lap, we are P7.”

For the first time in several races Romain Grosjean didn’t seem to have many complaints about his brakes. But he did have other problems.

Grosjean: “Gary I think we’ve got too much understeer in high-speed.”
“You can box for flap later in your run.”

To Raikkonen: “We’d like to try something with the DRS for something we see with the floor. Disable it very early.”
To Bottas: “Need another 50 metres of lift-and-coast compared to the last lap.”
Massa: “Think I need to come back to the garage. I went on the side of the track and touched the kerb in an aggressive way.”

The session began with warnings about rain which prompted teams to head out early. But the weather and track stayed dry.

Hulkenberg: “Some small vibration on the front axle.”

To Kvyat: “Don’t cool down too much, we are still below the working range.”

Vettel: “Can I go for another run?”
“Yes you can.”
Vettel: “Magnussen is slowing down.”
“Ericsson is eight seconds behind. Track clear.”

Sainz: “Lot of de-rating that lap.”
“Understood. Because we started the lap with battery level medium to low.”
“Comment on this run?”
Sainz: “Yeah I’m a lot happier with the car. Just need clean laps.”
“Understood. Keep an eye on Stroll behind.”

Grosjean: “If there’s no rain on the radar can I do another fast lap?”
“Yes you can do another slow and a fast, you have Ocon 4s back.”

Raikkonen: “Have to keep those photographers out of the way.”
“Understood.”

To Perez: “Build a bit more temp. Set brake balance for turn one. It will be race-plus cool.”

Grosjean was another driver who went off at turn nine.

Grosjean: “Mate I just had a massive hit under the chassis. We completely messed out the aero balance so I don’t think I can do that run.”
Grosjean: “Give me a number as well I think we’re nowhere near where we want to be.”
Grosjean: “Did you get that message?”
“Yeah I understand the message. We can get you some more flap but you need a lot more, yeah?”
Grosjean: “I don’t know what happened I completely lost it in the entry of six and then massive understeer. And the same in turn nine massive understeer.”
“Yeah, OK.”

“All OK Marcus? Any damage?”
Ericsson: “No. Vibrations again.”

To Bottas: “We’re showing at least 1% more aero balance to the front with the damage to the floor so box for flap adjust to correct it.”

Hamilton lost a little time in the second half of the session.

“Need a few more laps on this set then switch to the super-soft.”
Hamilton: “Still have issues with power.”
“Copy. We can still see them.”
Hamilton: “Something doesn’t feel right. Don’t feel comfortable to keep pushing.”
“Copy. We’re happy at the moment, looking at the data.”
Hamilton: “Need to take out a whole lot of front wing.”
“Copy that Lewis. Box, box, we are pulling into the garage.”

Raikkonen: “I don’t know what is happening. The floor is vibrating in turn five the fast left-hander. The rear is very bad.”

“Big lift off before the pit try. Easy on braking. Box. We have a problem with the brakes.”
Kvyat: “Oh guys I need to jump out.”
“OK.”